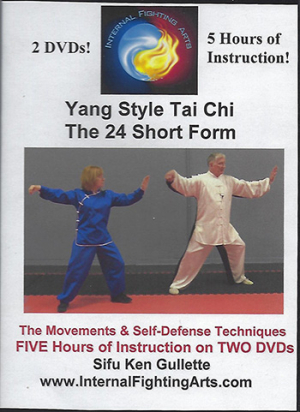 This 2-DVD set contains FIVE hours of step-by-step instruction on the movements and the self-defense applications of the Yang 24 form. It costs only $24.99 and that includes free shipping worldwide.

Ken Gullette began learning the Yang Style 24 Form in 1987. Three years later, he won a Gold Medal with this form at the 1990 AAU Kung-Fu National Championships.

The Yang 24 was designed in Beijing in 1956 by a committee of experts who wanted to provide the public with an easy entry into the art of Tai Chi Chuan. It became the most popular Tai Chi form in the world.

This form is practiced daily by millions of people of all ages. It is especially popular among adults and seniors, who use the slow, graceful movements to maintain health, fitness, and to improve balance, blood pressure and other benefits.

Although Tai Chi was created as a martial art, the Yang 24 Form is primarily used as "moving meditation." Ken teaches the complete form for those interested in health and fitness, and he teaches the self-defense applications to give all students better insight into what the movements mean.

On Disc 1, Ken guides and encourages a student through each movement in the form with detail that you rarely see on a DVD. You will learn principles of movement and body mechanics that are not taught by most Yang 24 teachers, and you will learn what mistakes to avoid as you watch Ken correcting the student, who has never studied the form before.

On Disc 2, Ken and three students -- Colin Frye, Justin Snow and Chris Andrews -- demonstrate and practice self-defense applications for each movement. The intent of each movement in a Tai Chi form is for martial arts. You will get a complete education on the punches, palm strikes, elbow strikes and shoulder bumps, kicks, sweeps and takedowns that are hidden inside the gentle movements of this Tai Chi form.

Only $24.99 with Free Shipping Worldwide and a Money-Back Guarantee!

Watch a Short Clip from the DVDs