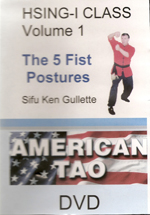 FREE SHIPPING Anywhere in the World! PLUS Buy Any 2 of Sifu Gullette's DVDs and Get 1 FREE!

This DVD will teach you -- in detail -- the five fist postures of Hsing-I Chuan. These fist postures form the foundation of this amazing and powerful internal art.

The DVD runs one hour, and during that time, you'll join Sifu Ken Gullette as he teaches the basics of the fist postures to beginning Hsing-I students. You'll watch as he demonstrates each fist posture, and you'll practice with the class as he corrects mistakes that the beginners make.

This unique DVD will not only teach you the right way to perform Hsing-I, but you'll also see mistakes other beginners make so you can avoid the same mistakes.

The five fist postures -- Pi Chuan, Tsuan Chuan, Peng Chuan, Pao Chuan and Heng Chuan -- are powerful fighting techniques with many self-defense applications. The purpose of Hsing-I is to drive through an opponent. It is constantly moving forward, taking the oppponent's ground.

Sifu Gullette and his students have won dozens of first place trophies at tournaments performing Hsing-I Chuan. They use the art in their sparring, and one of Sifu Gullette's students uses Hsing-I in his job as a police officer, true evidence that this art really works!

You won't find this kind of detail on any other DVD.

The DVD costs only $19.99 with FREE SHIPPING anywhere in the world! There is a MONEY BACK GUARANTEE if you are not satisfied in any way.

Bonus #1 -- buy one more DVD and get a third single DVD (of your choice) FREE! Two and 3-disc sets count as one purchase and are not eligible for your free selection (only single DVDs as free choice, please). Just complete your order and email ken@internalfightingarts.com with your free selection - we'll include it in your package!

Bonus #2 -- You will be signed up for Two Free Weeks on Sifu Gullette's website -- absolutely free of charge with NO automatic renewal. You'll have complete access to nearly 600 video lessons, e-books, audios and more for two weeks. Sample all of Ken's DVDs along with hundreds of videos that are not yet on DVD!

PURCHASE THIS DVD THROUGH OUR SECURE SYSTEM:

Watch a Clip from the DVD Below: