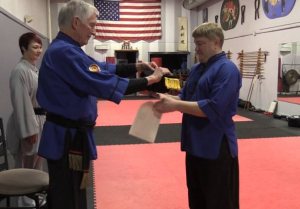 I present Colin Frye with his black sash as Kim Kruse looks on.

On Sunday, January 15, 2023, I awarded black sashes to two long-time students, Colin Frye and Justin Snow. It was an event that I have been looking forward to for several years.

Colin began studying with me when he was a student at Augustana College around 2004. Justin started not long after, when he was 16-years old.

Our curriculum is so extensive, covering the basics of Xingyiquan, Chen style Taijiquan, and Baguazhang, it can take four or five years of heavy-duty, nearly nonstop practice to earn a black sash. It can take a lot longer if you are a normal human being. That's why since 1997, when I first began teaching, Colin and Justin possess only the fourth and fifth black sashes I have awarded. Colin and Justin now join the ranks of Rich Coulter, Chris Miller, Kim Kruse, and Marilyn Hackett (who was awarded an honorary black sash). Kim was at the presentation of the sashes to Colin and Justin.

Anyone who has seen my videos has seen Colin and Justin. I have depended on Colin since he was 22 to be the one who shows up when everyone else is busy, and when both of these guys are there, our practices are full of creativity and growth. Justin was the teenager who peppered me with questions during class like, "What if someone did this?" He has added a great deal to our practices due to his size and strength. As I continue to study and try to get better, I depend on them to help me, and they do. 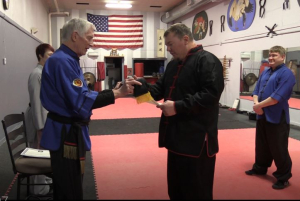 When I earned my black sash almost 26 years ago, it was an important milestone. I worked my butt off to get there, but I didn't feel great about the system I was in, so I hit the tournament circuit to find out if I could compete with the best of other styles. I found out that I could, but I knew there were holes in my curriculum, so I sought out information, videos, and in 1998 I met my first Chen Taiji teacher, Jim Criscimagna, who taught along with his wife Angela in Rockford, Illinois.

So my black sash actually signalled the beginning of my real studies. A black sash is like achieving a Bachelor's Degree in college. It's an honorable achievement. It takes hard work and determination. But after you get a B.A. you are ready for higher levels of learning. Now, the real learning begins. We can help each other improve our skills.

We don't wear sashes to our practices. We only wear uniforms when shooting "official" videos. They are probably the last students I will take through a colored-sash curriculum. We have been evolving out of that and the evolution continues. But for this moment, we reward hard work, persistence, dependability and loyalty. In our thinking, after you reach black sash, you become known by what you know and what you can do. It's up to each person how they want to travel that path. Some stop when they reach black sash, some go forward very slowly, and for some of us, we couldn't stop if we wanted to. It's part of our DNA.