Home Archives Profile Subscribe
After 49 Years of Martial Arts Why Am I Practicing So Much?
Happy Birthday as This Blog Turns Sweet 16 Years Old 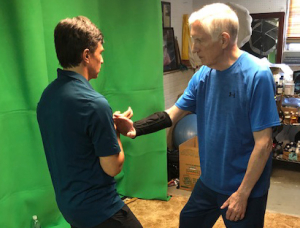 Comparing notes with Nelson Reyes, a student of Monk Yun Rou, when Nelson passed through town a couple of months ago.

I met a very nice, earnest young man recently who is studying with me in-person after studying Yang style for a couple of years. I asked him to do the first part of his form -- the Yang 24 -- so I could see how he moved. After a few movements I had one reaction.

"Fire your teacher," I told him. "But before you fire him, give him a roundhouse kick to the head."

I had him begin his form again, and during parts of movements I stopped him and pressed lightly on his arms or body. He caved in instantly. There was no peng, no ground path, and when he moved, he twisted and turned from the hips to the shoulders in one unit, which would allow anyone to control his center and take him off-balance.

So we started over. We practiced some principles that give you the internal structure -- internal strength -- and the connected movement through the body that helps you deliver relaxed power. We worked on moving the Dan T'ien, not twisting the hips. We worked on using "intent" throughout the body. We worked on the first silk-reeling exercise, which puts some key body mechanics together.

It's fun when you get someone to think differently, see the substance below the movement and hear them say, "Wow!" over and over.

It made me remember my first experience in Chen style Taiji after studying Yang style for more than a decade. I had won a gold medal with my Yang 24. I thought I really knew Taiji. Then I met my first Chen instructor, Jim Criscimagna, and within one hour, I knew I had to start completely over in Taiji. I drove two hours home from our meeting saying, "Wow!" In fact, I kept saying this each time I studied with him and his wife, Angie.

The first couple of times I met with this new student recently, I had to center myself because it was clear that a lot of people think they are studying Taiji when, in fact, they are learning an art for people who want to vacate their minds and meditate. The weakness and emptiness of what he thought was Taiji frustrated me, but it is a common thing.

At the same time, it's a great feeling when someone feels the difference between the weaker art and one with internal structure and intent and they have the realization that makes them say, "Wow!"

I try to keep my mouth shut when I see someone doing a weak art. They move their hips in space and turn their hips instead of using the kua and Dan T'ien. They appear often to have no intent in their arms and hands, and no connected movement. I look for a "ribbon of internal strength" moving like a wave through the body, but the ribbon is usually broken, if there is a ribbon at all. If I consider the person a friend, I'll ask a question which might lead to a discussion on that particular movement or principle.

If I ask a question or point something out as politely as I can, I am sometimes told, "Oh, that's YOUR style. That's not our style."

And then I am sometimes told that Chen style is not really Taiji.

Well,okay. Go for it. Do yo thang, baby.

My first Chen teachers, Jim and Angie, taught me some important lessons. For one thing, they encouraged me to study with different masters. If other Chen teachers were nearby, especially when different Chen family members came around, study with them even if it is outside your "lineage." There are masters under a famous Yang-style instructor who live in my area. I have tried to meet up with them to compare notes but they haven't expressed an interest in doing that.

When I met Chen Huixian in 2013, I gained some insights and got corrections that made me say, "Wow!" And that also happened when I began studying with Nabil Ranne in 2020. I didn't think, "He does something different. He's from a different Chen style lineage. That's not MY style."

Several years ago, I met with some of my karate friends for a workout. They showed some of their forms and I showed a Chen-style form. I asked about fighting applications of their movements and they had surprisingly good answers that helped shed light on the applications for some Taiji movements. It was a great exchange and a lot of fun.

A few years ago, I met with a friend who studies Guided Chaos -- a completely different type of martial art -- and I gained insights that made my push hands better. In fact, it changed the way I look at and teach push hands, too.

If you open your mind to insights from other teachers, even other styles, you can come up with information that will improve your skill. I try to get together with people from other Chen and Yang-style lineages whenever I have the chance, to compare notes and to "feel" what they have. I am often pleasantly surprised and I learn something. Sometimes, I even say "Wow!"

You'll Say WOW when you try two weeks free on my website and see nearly 1,000 streaming video lessons in Taiji, Xingyi, Bagua and Qigong, PLUS live classes and personal feedback on Zoom. All for only $19.99 per month! Click this link and check it out!