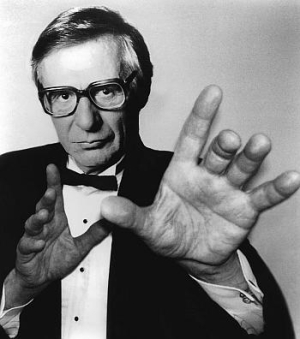 The Amazing Kreskin
50 years ago tonight, on Sept. 5, 1972, the Amazing Kreskin helped me improve my critical thinking skills and become more of a person who needs real evidence before believing something. You know, a skeptic.
Kreskin was very famous at this point. He appeared on major TV shows doing his act as a mentalist and a "mind reader." I was on the student newspaper at Eastern Kentucky University and I arranged an interview with Kreskin after his performance.
I was 19 years old and believed in ESP, all kinds of psychic phenomena, channeling the dead -- I believed it all. When my buddy Eddie told me his karate teacher could slice his arm with a knife and not bleed, I believed it. But Kreskin helped change that.
In his performance on stage, he would read the minds of people in the audience, or so it seemed. He called people on stage and claimed to hypnotize them. He called a group of students up and I was one of them. It was really exhiliarating to be part of the show with Kreskin and about nine other students.
"When I clap my hands," Kreskin told us, "you are going to begin clapping and you won't be able to stop until I say stop." He then clapped his hands and we began applauding. I looked at the other students on the stage. We were all clapping our hands. This went on for about 20 seconds. The audience was laughing and enjoying it.
Then I realized, "Wait a minute. I'm not hypnotized. I can stop if I want."
So I stopped clapping. All the other students onstage continued to clap and I realized that I was going to be the only a--hole up there who wasn't clapping. So I started clapping again, and I kept it up until he commanded us to stop.
It dawned on me that nobody who went onstage was hypnotized. If he called someone onstage, and suggested the person would bark like a dog when he snapped his fingers, he was giving them permission to act out. So they did. Every time. They were in the spotlight.
So when I realized onstage that I wasn't hypnotized, I stopped clapping but the peer pressure, all those students in the audience staring at us had an impact on me. I also didn't want Kreskin to look as if he had failed at hypnotizing me. So I began clapping again.
After his performance, I went backstage to his dressing room and interviewed him. It was a short interview, and when I asked if he would read my mind he said he was too tired. At one point, I cracked a joke, and he laughed and slapped my leg so hard it left a red hand imprint. It wasn't so much a brush with greatness as a slap with greatness. I walked away that night to write my story with a new perspective on belief and manipulation.
When I began studying the internal arts, I encountered a lot of the same type of thing. The teacher tells the class they are going to do a certain thing because of his qi power and they do it. One of my teachers stood in the middle of the room and said as we ran at him, he would drop on the floor, draw a little circle in the air to control our qi, and we would fall over him instead of being able to stop and pound him.
One by one, we ran toward him, and each person rolled over him when he ducked. When my turn came, and I was running at him, I knew it was another Kreskin moment. When he fell to the floor and drew his silly circle in the air with his finger, I could stop and pound him. But could I do that to my teacher? And make him look like he didn't have qi power? No way. So like all the other students, I dived over him and did a shoulder roll on the other side.
No martial artist wants me to be his partner when he is faking qi powers these days. It would not go well for him. Homey don't play dat anymore.
It was the beginning of the end for me and the teacher who did this. And when martial arts magazines began showing "qi masters" knocking down students without touching them, or making them bounce and hop away just by touching them, my $5,000 Challenge was born. All because of what Kreskin did to me 50 years ago tonight. Kreskin is still alive. I wish him the best. Thanks for such an important lesson all those years ago. As a martial artist it has been very useful.
--by Ken Gullette