Remaining Centered When the Ceiling Collapses 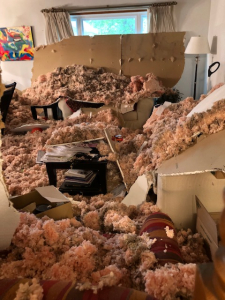 Do you know the story of the Buddha and the 84 problems?

The Buddha was passing through a village and a farmer wanted to ask some questions. The farmer asked if the Buddha could make it rain so his crops would grow. The Buddha said, "No, I cannot help you with that."

The farmer asked if the Buddha could get his son not to move away from the farm to the city, so the farmer would have someone to help him with his crops. The Buddha said, "No, I cannot help you with that."

The farmer told the Buddha that he owed money to some people, and asked the Buddha if he could get the people to stop demanding payment until the farmer could save more money. The Buddha said, "No, I cannot help you with that."

The farmer was getting angry. "What good is Buddhism if it can't help me with these problems?"

The farmer thought for a moment and asked, "What the hell is the 84th problem?"

The Buddha replied, "Thinking you should not have 83 problems."

Nancy and I narrowly escaped serious injury almost two weeks ago when our living room and dining room ceiling collapsed with no warning.

We had been drinking coffee and reading the paper at the dining room table, as we do every Sunday morning. At around 9:00 a.m. I decided to go to my office to prepare for a video shoot for my website. Nancy hit the shower.

About seven minutes later, the house shook with a loud CRASH! At first, I thought Nancy fell in the shower, but then I noticed the crash lasted a bit too long for that.

I stepped out of my office, looked up the hallway and saw what you see in these pictures.

The sheet rock and insulation came down. I tried to pick up a large piece of the sheet rock and it was heavier than I expected. That's when I realized how lucky we were. Nancy often goes to the couch to look at her laptop at that time of morning on Sunday. If she had been there, she would have been hurt (or worse).

I went to where she was and tried not to alarm her. I said, "Nancy, we have a problem."

We walked down the hall to survey the damage. We were both stunned, and immediately, my decades of training kicked in and I centered myself.

We have our homeowners insurance through State Farm. A couple of people with State Farm told us that our policy doesn't cover ceiling collapse, especially if it was caused by "shoddy workmanship." And apparently, houses built in our area during the 1970s sometimes had ceilings that were nailed up, not secured with screws. Over time, those nails can loosen and the sheet rock can fall.

The day after it happened, Nancy called a number for State Farm. The man on the other end said, "We don't cover ceiling collapses." Then he asked, "Do you want me to close out your claim now?"

Isn't that strange? Fortunately, she said no.

I worked in the news business for 22 years, so I know a good story when I see one. If more homes in our area have the potential for this type of disaster, I would want to know, so I contacted two TV stations and we were the lead story on KWQC-TV, the NBC affiliate in town, and on WQAD-TV, the ABC affiliate in town. Check out the story on KWQC-TV.  Check out the story on WQAD-TV.

After these stories were broadcast, I received a call from State Farm assuring me that a final decision had not been made, and I would receive a letter to that effect. I'm not sure what good it does me to get a letter saying a decision has not yet been made. I was in public relations for a while, so I do understand why they needed to respond that way.

It is now almost two weeks since the collapse. We had the mess cleaned up (mostly) within four days. State Farm sent an insurance adjuster out and he explained that we would likely be covered if we had put heavy stuff in the attic and it fell through. 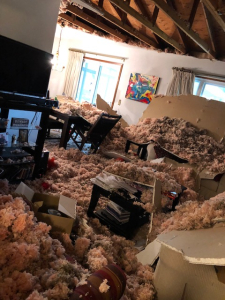 He asked if we had water damage, because if the roof leaked and water caused the ceiling to collapse, it would be covered.

But we put a new roof on the house three years ago. We did it because we DIDN'T WANT water damage. Apparently if there was water damage and the ceiling collapsed, it would not be covered.

Our home was owned by one couple before us. When we bought the house, it had to undergo a home inspection. The inspector signed off on everything, including the ceilings. If the construction in Moline, Illinois was a problem for homes built in the 1970s, why didn't the inspector know it? Why didn't he warn us? Why did State Farm insure the home (even though the contract does provide a lot of exclusions for ceiling collapse)? And why didn't anyone inform us that this could potentially be a problem?

I called the man who inspected our home when we bought it. He says he never heard of a ceiling collapsing like this. But the ceiling repair guys say they see it regularly.

Who do you believe?

Sometimes, you follow the money. Who benefits if houses have this construction issue and it passes the inspector, the realtors and the insurance company, which has an exemption in the policy for ceiling collapses unless the collapse is caused by specific things. How many people make money off the sale and insuring of this home?

You are supposed to be safe in your home. Who expects their ceiling to collapse on them?

It's not easy to remain centered when you feel as if you are in a Joseph Heller novel, caught in a Catch-22.

A family bought the home next to us last year. The husband did a lot of work for weeks to get their home ready for them to move in. I walked next door and showed him the pictures you see on this post. He said he realized the ceilings in his home were built the same way, so before they moved in, he fixed all the ceilings.

Again, it makes me wonder why Nancy and I are the last to know about this?

The investigation is still officially underway by State Farm. Today, a structural engineer came by the house, along with our insurance agent, who explained that they are looking for a reason to cover the collapse. We probably won't know for another 10 days. I am hoping they do the right thing and I will provide an update when we find out.

Meanwhile, our ceiling in the living room and dining room is a plastic sheet. A ceiling expert came over to give us an estimate and he said the ceilings through the house would need to be worked on to support them. He went into my office, where I am writing this. He stood on a step-ladder and pushed up on the ceiling. It gave and creaked a little bit. That is not what I wanted to see.

I am sitting here with the knowledge that the ceiling above me could crash down, too. You know, it isn't paranoia if your house IS actually trying to kill you.

The estimate for fixing the ceilings is $13,500, and if State Farm doesn't pay, that will come out of our pocket.

Chicken Little was right! The sky really IS falling. But if you look at it from the lesson of what Buddha was saying, why not? Some people experience this kind of disaster in their home. This time it happened to me.

So I was able to remain calm and like with any crisis in life, take one step at a time, put my head down and get through it.

I will provide an update on whether State Farm is really like a good neighbor.

This has had an impact on my practice for the past couple of weeks, although I did teach two classes Wednesday. I should be back on my regular schedule by Monday.

It seems a bit ironic that you can die in your living room.

Remain centered, my friends. Don't let your 83 problems get you down.