Home Archives Profile Subscribe
Prepping for My First Workshop in Almost Three Years -- Nabil Ranne in Philadelphia This Weekend
In the Concrete Jungle of Chicago, a Flower of Kindness Blooms 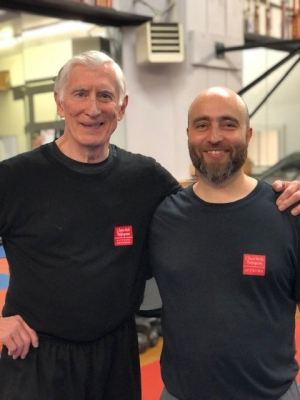 I spent four days this past week studying Chen Taiji with Nabil Ranné in Philadelphia. The workshop was hosted by Ryan Craig of Philly Chen Taiji.

Nabil came to the U.S. from Berlin for the workshop. I have been studying in his online classes for almost two years, so it was a pleasure to finally meet him in person. He is friendly and humble; one of those people you instantly like.

During the past two years, Covid virtually destroyed the ability to hold workshops. Just getting together with a group of taiji folks was reason enough to celebrate.

I have attended many martial arts workshops during the past 35 years. Depending on who is hosting the event, you can either feel a spirit of camaraderie or it can feel like people gather in cliques.

In Philly, there was a lot of laughter. Nabil brings a sense of humor to his classes and Ryan joined in. That's all I needed -- to be serious about the art but to have fun training. Those are ideal conditions for me.

We trained four hours a day for four days -- Friday through Monday, May 13 through 16, focusing primarily on the first three sections of the "First Road," or "Yilu" form.

Nabil is a disciple of Chen Yu of Beijing, the grandson of Chen Fake and the son of Chen Zhaokui. Chen Fake is also the grandfather of Chen Xiaowang and Chen Xiaoxing (Chen Yu is their cousin), but there are differences in the way Chen Yu moves compared with the Chen Village masters.

I had Nabil on my Internal Fighting Arts podcast nearly two years ago (listen to the interview here) and I had been curious about Chen Yu's taiji for several years. Most of my training has been with Chen Village masters and their students. I did a couple of private online classes with Nabil and was fascinated by what I learned, especially the details in his instruction. Not long after this, I enrolled in his regular online classes. We have gone through the Yilu and Erlu forms during the past couple of years. The Philly workshop focused on Yilu and the body method of the Chen Zhaokui/Chen Yu version of Chen taiji. 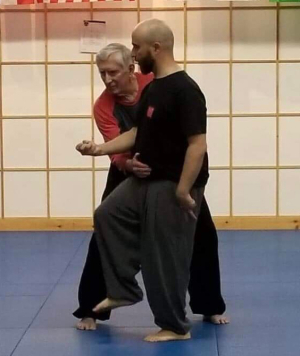 Ken Gullette in a "hands on" moment with Nabil Ranné to feel the internal movement.

As he led us through the first movements of the form, Nabil focused on proper stances, relaxing the hip joints, and establishing peng jin throughout the body. One of the many helpful tips I received was maintaining a connection with the Baihui point as my body is sinking, as in part of "Buddha's Warrior" when the fist prepares for the raising of the knee before the stomp. I also need to work more on extending peng and maintaining it through the shoulders, too.

During the weekend, I wanted to write about what we practiced, but I had a hard time putting it into words. I was processing the information. Even as I read what I write here about the workshop, I'm not satisfied. It's difficult to describe in words. It has to be shown.

Online classes are great. You can improve a lot by studying with a teacher online, especially if that teacher gives you personal corrections, as I do with my website members and as Nabil does. But nothing is as good as being in person. Nabil was able to put his hands on me to make corrections, and when I put my hands on him, I felt internal movement in the chest, back, Dantien and Mingmen that was very informative. I will be processing this information and working it into my movement for a while.

We worked on principles of movement, including the shifting of weight, the relaxing in the crease at the hip to maintain mobility, and to keep the knees from swimming -- to "stay in the frame."

We worked on applications, especially some good joint locks. It was interesting to see how "Six Sealings and Four Closings" can be used as wrist locks against an opponent who has grabbed your arms. But almost every application we practiced contained elements that drove home once again how powerful Chen taiji is as a martial art. There are subtleties in the way you can connect to an opponent's wrist, elbow and shoulder during a joint lock, depending on the position of your opponent's arm. Just moving your little finger can help connect a wrist lock to the elbow, making it more effective if your opponent is trying to escape the lock.

Monday, May 16th was the final day of the workshop. As we trained that day, I became very grateful for the opportunity to learn and try to improve in my internal skills. Battling a huge blood clot that has cut off all blood flow to the left lung, it was a gamble making arrangements to fly to Philly for this, but I was in good shape and toughed it out through the four days. The blood clot (or blockage) is still there, but what the hell. I don't think about it much and certainly don't let it slow me down any more than I have to. By the fourth day, however, my quadraceps were painfully locking up at times. If you do a Chen taiji workshop and your legs aren't fried, you haven't worked hard enough.

We didn't spend a lot of time holding stances, but we did hold them at times. During one of those moments on the third day, we were struggling through the pain and fatigue as Nabil went from one student to another making corrections. There were groans and grunts and heavy breathing as the attendees tried to maintain the posture. I'm pretty sure I was the oldest student there, so I cracked, "This was a lot easier back when I was sixty!" I can still hear the laughter, as if a relief valve had been opened. I love laughter in class.

I got a bit emotional as I said goodbye to Nabil on Monday afternoon. I like the man. And I want to see him again in person. My thanks to Ryan for hosting. I think everyone hopes it happens again next year.

As time passes, it is not lost on me that I have a lot less time to enjoy training like this than I used to. Every moment is precious. Now let's go. There's a lot to do. Let's practice.

Posted at 10:19 AM in Tai Chi, Taijiquan, Workshops and Seminars | Permalink | Comments (0)