Taijiquan (Tai Chi Chuan) is a lifelong journey. It can take years to develop skill. That's why it helps to have a teacher who has skill and will coach you in a constructive way.

One of my goals as a teacher is to save time for my students and help them discover information that took me many years to learn.

Here is a video I made last week about a common mistake we all make until a good teacher tells us to stop doing it.

It's the problem of swimming knees. I encourage you to watch this video, then watch yourself in a mirror or record your own movement to see if it is something you need to work on.

Here is a short video showing and explaining some of the body mechanics to four takedowns in four different movements from Chen style Taijiquan.

I am fascinated at all the self-defense applications in movements that often appear slow and gentle. Taiji (Tai Chi) is practiced slowly to develop proper internal body mechanics. There is a method of developing skill that later involves push hands, then flowing with a partner in unscripted ways, and then incorporating joint locks, sweeps, takedowns, elbow and shoulder strikes and other fighting techniques.

The takedowns come from these four movements:

Enjoy this video. We shot in on Sunday and I edited it today. Let me know if you have questions. 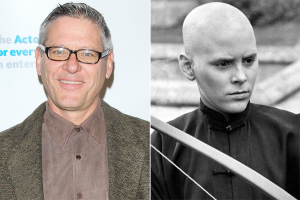 Radames Pera is the last surviving star from the original "Kung Fu" TV show. His memory is burned into our brains, the young bald student monk who learned martial arts and Eastern philosophy from Master Kan (played by Phillip Ahn) and the blind Master Po (played by Keye Luke).

Master Po referred to young Caine as "Grasshopper," and that term has been used in martial arts classes ever since. Sometimes, when I'm teaching a student and they suddenly understand a technique and perform it well, I find myself saying, "Ahh, Grasshopper."

A few weeks ago I wondered what happened to the young boy who played the part of young Caine, so I searched and found Radames living in France. He is 61 now. I sent him a message, asked him to be on the podcast, and he graciously said yes.

He is a very engaging, funny and intelligent man. We talked for two hours, and I enjoyed every moment talking about his career (it is much more than just "Kung Fu") and some of the people he worked with, including David Carradine, Phillip Ahn and Keye Luke, and others such as Jack Lord ("Hawaii 5-0"), Michael Landon ("Little House on the Prairie"), and a man I appeared in a movie with, Lee Majors ("The Six Million Dollar Man").

I hope you enjoy this interview as much as I did. Listen online or download the file at the Internal Fighting Arts podcast page.