Dial Down the Paranoia about Defending Yourself "On the Street" 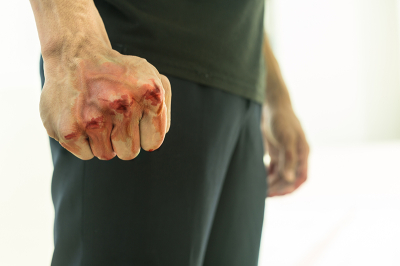 Have you been in a physical fight with anyone since you turned 18 years old?

Here's another question: In your adult life, have you ever been in a "street fight?"

Have you ever been in a situation when another grown-up was trying to damage you physically?

The truth about most adults is that they have never been in a real fight at all. But self-defense instructors and MMA enthusiasts are obsessed with the need to protect yourself "on the street."

When I hear the term "defending yourself on the street" I think of two gangs colliding for a brawl with sticks, chains and brass knuckles. Like "West Side Story" without all the dancing and singing. Let's face it, if your gang runs around singing and dancing, you might deserve to be beaten up.

I saw an interesting graphic online recently and it showed the main martial art practiced by UFC champions who fought matches in the ring.

The top martial art for ring fighting was wrestling. That's right. A college wrestling champ would have a good chance at winning a UFC fight, especially if he cross-trained in other arts.

The next most successful UFC art was Brazilian Jiu Jitsu, followed by boxing. Further down the list were kickboxing, Muay Thai, and barely showing up were Taekwondo and Karate, but they did show up. Tai Chi did not show up. Neither did any other Chinese martial art.

I was intrigued and a little amused by the conversation that followed, with some guys talking about "street fights" and defending yourself "on the street."

Let's take a step back for a second.

If you are over the age of 18, when have you had a physical fight with someone as an adult?

Most of the adults I know have never been in a fight at all, even as children.

When have you needed to defend yourself "on the street?"

I was talking with a guy last year who attended a Fourth of July fireworks show. Families and couples gathered on a grassy hill with blankets on the ground, food and soft drinks, all gathered to watch the fireworks with friends and family.

The guy I was talking with (a fundamentalist Baptist evangelical and far-right-winger) had forgotten to take his gun, which he carries concealed on his body. He told me that he was uneasy the entire evening during the fireworks show because he didn't have his gun.

There is so much to unpack from that situation. Forget about the "peace and love" that is supposed to be at the heart of his religion. Let's consider a person who is so tied to his gun that he can't fully enjoy a fireworks show with his family. He is so worried about a gunman showing up at a fireworks show, he is anxious because he isn't packing heat. An evangelical Christian who expects that he just might need to kill someone during a family outing.

Then let's look at the guy who is obsessed with martial arts that will win UFC matches. If you can't win in a cage, your martial art sucks, he says.

I would urge both of these guys to dial down the paranoia.

I will be 70 on my next birthday. I have never had to physically fight an adult. My last fight happened when I was 18, and that was when I hit a bully in the nose twice. It wasn't exactly a fight because, after years of bullying me, he gave up as soon as he received two punches in the nose. That's the way it is with bullies.

I love the self-defense applications of Taiji, Xingyi and Bagua. My greatest enjoyment when I practice these arts is in developing my internal movement and in unlocking all the fighting applications hidden in the movements.

But when I go out in public, whether it is walking down the street, going into a store or enjoying a fireworks show on a grassy hill, I look at everyone through the eyes of acceptance, kindness, and friendship. I smile at people. I am connected to them. I do not see a stranger as a possible attacker. I see them as another human being who deserves respect and a sense of humor.

Nancy laughs when I interact with people in public. She says, "You make friends wherever you go."

I guess it's true.

But that does not mean I'm oblivious. Quite the opposite. I am "aware."

I wrote about an incident several years ago when Nancy and I were in Chicago at a Taiji workshop, and that evening we walked down the Magnificent Mile to explore some stores on North Michigan Avenue and to have dinner, hopefully at the Cheesecake Factory.

As we walked, the crowd got larger. There were a lot of younger people on the sidewalks, and I noticed that as we walked toward the Water Tower Place mall, the conversations and laughter grew a little louder. I enjoyed it. I don't mind crowds because I use my philosophy, I center myself and connect with people.

But on this evening, as we entered the mall, my self-defense alarm went off inside my head. The laughter and conversations got a bit louder, in a way that seemed abnormal.

"Let's get out of here, honey," I told Nancy. "Something doesn't feel right."

Nancy knows to trust my instincts. "Okay, let's go," she said. We walked away from the mall, back toward our hotel, and stopped at a restaurant that was not on the Magnificent Mile.

As we walked down the sidewalk, I said, "I'm sorry."

Nancy replied, "No, that's okay. If you felt like something was wrong, that's good enough for me."

Back in our room three hours later, we turned on the 10:00 news. The lead story was about how groups of young people began running through the mall and on Michigan Avenue punching people at random. It started right after we decided to leave the area. The mob scene was organized by young people on social media days in advance. They were encouraged to be on the Magnificent Mile that evening and attack people. When the melee began, police responded. It was the lead story on the Chicago newscast.

If my self-defense radar had not gone off, I might have suddenly been defending us against young guys running up to hit me or Nancy, or both.

Instead, I had used the best self-defense technique of all. I was not there.

Watching the newscast I was amazed, and Nancy was, too, and it's always a good idea to impress your woman. I mean, isn't that one reason a lot of us got into martial arts to begin with?

My self-defense alarm is based on awareness, not paranoia. I'm not expecting violence wherever I go. I remain aware of who and what is around me. And I don't put myself in dangerous situations. I avoid places where a "street fight" might happen.

Even after this happened in Chicago, it does not worry me when I am in crowds, stores, or anywhere else.

I enjoy myself, I enjoy other people, and I remain connected to people and aware of what is happening around me.

Why do I train the internal arts? I train mainly to improve my internal movement and to unlock the self-defense applications in the movements. It is fascinating to me. A great side benefit is fitness and health. I don't practice to enter a ring. That's a completely different game. I was able to fight long before I studied martial arts. The self-defense skill I have gained in the internal arts has helped me refine that ability.

When I do Qigong, I develop a calm, connected feeling and I develop awareness. As Chen Xiaowang says, "Listen behind you." There is a very good reason he says it.

Do not equate getting in the ring for a UFC match with real-life self-defense. It isn't the same. One requires an inhuman level of pain and preparation. The other matches you against people who are not trained for the ring.

One of my teenage students shattered the elbow of a drunk adult who grabbed him and tried to punch him. My student used a joint-lock technique we worked on in class.

Another student of mine, a police officer, used Xingyi to take down a perp who was involved in a standoff with police.

Does that count as "street" violence? It's real-world violence, and real-world violence usually comes in the form of a drunk person, an abusive spouse, or a person with anger managment issues. If you are a cop, real-world violence is not the same as being in a cage match, and as a police officer, with violence a possibility during every work day, it is understandable to carry a gun.

Winning a UFC fight requires a lot of experience in taking and giving punches, kicks, being thrown, grappling and doing choke holds and almost inhuman endurance training. Injuries are common during training.

You are not going to be involved in a "street fight" with a trained, in-shape MMA or UFC fighter, unless you are incredibly unlucky or unless you are dumb enough to pick a fight with the wrong person. That is not real-world violence. You do not need to be able to win a UFC match.

There is a lot of cool stuff to learn and practice in martial arts, and a lot of effective self-defense, but there is nothing to fear. The fear comes from within us. So does peace.

Practice hard. Expect the unexpected. Remain aware. And remain centered at all times.