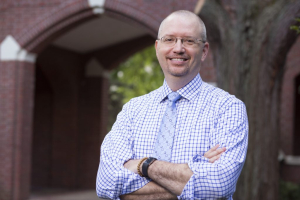 Martial arts and philosophy have had a close relationship throughout history, and Eastern philosophies have had a big impact on my life. In the 59th edition of the Internal Fighting Arts podcast, I talk with ordained Zen Buddhist monk Douglas Gentile, Ph.D., who is also a professor at Iowa State University with a Ph.D. in child psychology. He first became intrigued by Buddhism when he watched the "Kung-Fu" TV show at age 10.

In a wide-ranging discussion, Doug talks with me about how to live a more fulfilled life of awakening and balance in a modern world when so many of us seek mental distraction the moment we are left alone with our thoughts. How do we develop awareness, empathy and connection, and the ability to overcome problems and tragedies in our lives, and why is that so beneficial to us? How do we learn to "walk easily over rough ground?"
Listen via this link or download the podcast. It will also be available via Spotify, Apple Podcasts and other podcast distributors.
https://internalfightingarts.libsyn.com/internal-fighting-arts-59-douglas-gentile
I first heard of Dr. Gentile when I received a catalog showing his "Buddhism 101" course on the Learn25 website. I bought the course and found it very rewarding. Here is a link:
https://www.learn25.com/product/buddhism-101-how-to-walk-easily-over-rough-ground/

Top 10 Chen Style Taiji Movements to Practice in the Hospital 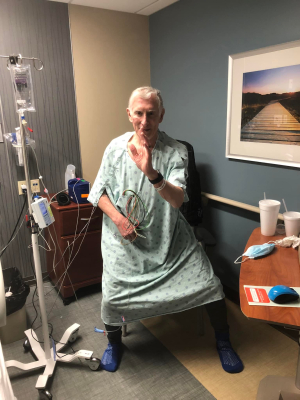 A few months ago, I developed several blood clots in my left lung. I spent five days in the hospital and was put on blood thinners.

I used to think that blood thinners dissolve blood clots, but they don't. Instead, they keep the clots from getting larger and then the body breaks down and absorbs the clot over time.

So I have been on warfarin for the past five months and I went in last Thursday for a follow-up CT scan to see if they had gone away.

Instead, a clot had grown larger and it was threatening the blood flow to the left lung. Because of past bleeding issues, my doctors and I had been too conservative on the level of warfarin in my system, so the warfarin did not stop this clot from growing. It's strange because I have been teaching all along and taught two classes on Wednesday with no unusual problems. But due to the CT scan results, I was told to go to the hospital...again. It's a serious health situation.

In the past few days, I have been stuck with needles every few hours to check my blood thinner levels, and with my right arm hampered because it is tethered with an IV, I have been practicing Chen taiji in my room very carefully, working on weight shifting, spiraling in the legs, using the kua and stepping. Someone on my Facebook page, Michael Sklaroff (responsible for #9 below) inspired me to compile the Top 10 Chen Taiji Movements to Practice in the Hospital. Here is the list:

4.  Green Dragon Comes Out of a Coma

2.  Lazy About Tying the Gown

Taking Ground is an Important Skill in Xingyiquan

One of my students around 2006 was a police officer and a member of his department's S.W.A.T. team.

During our Xingyi classes, we trained the fist postures, how to use them in self-defense, and we worked on taking ground.

In Xingyi, the goal is to drive through your opponent like a bowling ball through bowling pins, and when the attack is over, you are standing on his ground. It is physically and psychologically damaging.

So my student responded to a standoff situation one day. The perp was across the living room. At the right moment, my student lunged across the room using the same technique in this video and he took the perp down using Pi Chuan (Splitting Palm).

While he was being cuffed, the perp looked up and asked, "How did you do that so fast?"

Nobody expects you to take ground, keep your energy down and deliver power over seven to ten feet. When I was in my forties, I could take ground over a distance of eleven feet. Now, at age 68, I can't do that. But the drill in this video is very helpful if you want to develop this skill.

You can improve your ability to take distance. If you learn to deliver power from eight to ten feet away, you will plow through somebody who is four or five feet away like hitting them with a bus.

I am wearing a hand protector in this video because, being on blood thinners after developing clots in my lung six months ago, I can't exactly risk internal bleeding in my fist when doing bare-knuckle board breaks. That's why I am wearing a pad. I leave the bare-knuckle stuff to the young guys. 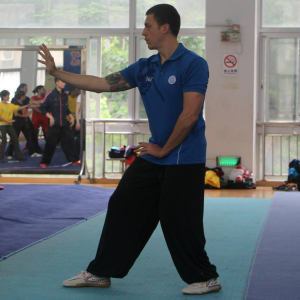 Byron Jacobs has become the first martial artist to appear on my Internal Fighting Arts podcast three times. He is a teacher of Xingyiquan and Bagua Zhang living in Beijing. He is a disciple of Di Guoyong.

In this wide-ranging discussion, we cover several topics, including how the Chinese people view their own government, the meaning of Xingyiquan "Classics," and what training is like with traditional Chinese gongfu teachers. We talk about the importance of forms and whether that should be the focus of your training and several other fascinating aspects of quality training, including the value of choreographed two-person sets and why you should take a notepad and pen to your next practice.

Here is the page to the podcast episode:

You can listen online or download it. The Internal Fighting Arts Podcast is also available through Spotify, Apple Podcasts, and other podcast distributors.

Byron teaches online through his Mushin Martial Culture videos on Patreon. His does an excellent podcast -- the Drunken Boxing Podcast, which is available through the usual podcast distributors.