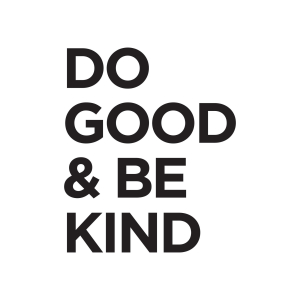 We all fall short of our goals at times. It's part of what makes us humans.

We try, but we often fail. The key is to pick yourself up and try again, a bit smarter this time.

Last week, I fell short of living my philosophy of treating people with kindness and remaining centered at all times.

Nancy was driving, I was in the passenger seat and we stopped at a red light. There was a car stopped next to us in the left lane.

As the light was turning green, I heard the sound of boots scuffing on pavement.

I looked to the left and a young man with long hair, a cowboy hat, and an open plaid shirt and jeans was walking in front of the car next to us. He was about to walk in front of us.

The light turned green and Nancy, oblivious to the pedestrian, started to gun the engine to drive forward.

"Stop!" I shouted and grabbed her shoulder. She slammed on the brakes just as the young man walked in front of our car.

Naturally, the adrenalin was flowing and we were both shocked at how close the young man had come from getting run over.

He kept walking and Nancy shouted, "Are you trying to get yourself killed?"

The young man looked at us and shrugged his shoulders as if to say, "Who cares?"

As soon as I said it, I regretted it. Nancy drove away, and I couldn't take it back.

It haunted me for a couple of days. Due to the shock of almost hurting someone, I lost my center.

What I should have said to him is, "Be careful!"

That would have been the kind and centered thing to do. 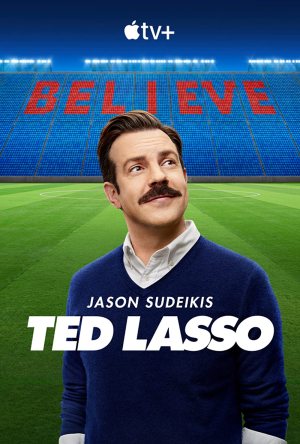 The next evening, we watched the latest episode of "Ted Lasso," the wonderful and funny series on Apple TV that has kindness as the basic message at the core of the show.

There was an important message in this particular episode. I took it this way:

Every person you encounter has very possibly gone through horrible things in their lives. Be kind to them.

I can't think of a better way to reflect my philosophy of life than that. I grew up as a Christian. At least, that's what my mother told me I was. But as I grew old enough to think for myself, as I got into martial arts and began reading books on philosophical Taoism and Zen Buddhism, I saw better, kinder ways of looking at the world. Enough of the eternal punishment bullshit. Enough already. Enough of vengeance. Enough.

We are now in a social media age where people post and share memes that assume the worst about everyone and try to stoke our anger at "the other guy who isn't like us."

I believe a lot of us don't think very deeply when we see a meme that criticizes a group of people and think, "Oh, that's good," and then share it. We forget that in reality, most people have good intentions, and I know that many people we encounter every day have been wounded by events in their lives that have left them damaged. Some of them are facing tragedies that we can't see, or trying to recover from ordeals that we can't see just by looking at them.

This young man who apparently didn't care if he was hit by a car, for example. What happened to him that would make him feel that way? Was he abused? Did something happen to make him consider himself worthless? Is he suffering from addiction or mental illness? When he was growing up, did he go to bed at night wondering if the next footsteps in the hall would bring someone who was going to beat him?

But I do know that I can be a better person than I was when he shrugged his shoulders. I should have lived my philosophy of treating all people with kindness, with humor, with respect and empathy. That is the way of the Tao. That is what a centered person would do.

I have remained calm and centered in a lot of tense, near-violent situations, but coming so close to such a senseless accident was shocking. It taught me a lesson of how a sudden rush of adrenalin and the horror of almost hurting someone can cause you to lose your balance, but that's not really a good excuse.

We fall short of our goals. We all do. The key is the lesson we learn from it, and whether we can recognize it when we fail.

We can make the world a more positive place, but it doesn't start with the other guy. It starts with us. With me. With you.

I'm going to do better next time.

48 Years in Martial Arts - The Journey is Now the Goal 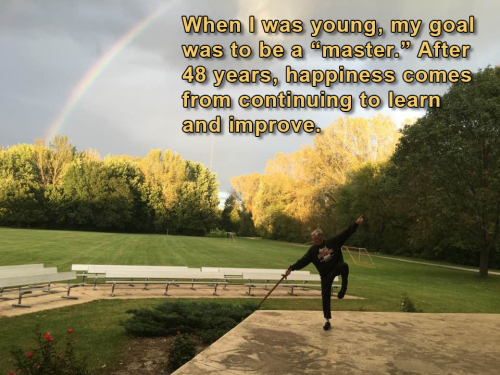 Forty-eight years ago this week -- on September 20, 1973 -- I walked into my first martial arts class at Grandmaster Sin The's "Shaolin-Do Karate" school in Lexington, Kentucky, my hometown.

I was a 20-year old student at Eastern Kentucky University. Asian martial arts were foreign to my generation. They were mysterious, and everyone said they were very deadly. The room was packed with new students inspired by Bruce Lee to check out the class.

At the time, I thought it would be really cool if I could become a "Master" of kung-fu, like Bruce Lee or the character Kwai Chang Caine in the Kung-Fu TV show.

Now, 48 years later, I have a different goal. I am 68 years old, not as physically strong as I was when I was younger, and when I think about my goal of being a master, I smile.

I was too young 48 years ago to realize that the journey I began that night was the goal.

There is a Vietnamese proverb that goes something like this: "There is no road to happiness; happiness is the road."

I keep finding teachers who know more about these arts than I do. It's exciting to discover these people, because I continue to learn. I continue to improve my skills.

And that, I have found, is the road to happiness.

What happens when you achieve the title of Master? Anyone can slap that title on themselves. Anyone can find an organization that will easily promote you to a belt-level that is considered "Master." And if you don't have silly things like ethics standing in your way, you could always start your own style and promote yourself to Grandmaster. I've known teachers who did that. 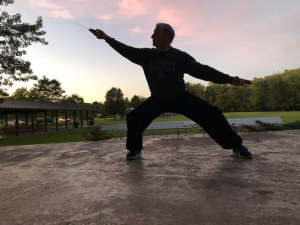 I see people on Facebook who actually put the title "Master" in front of their name. On Facebook! What kind of ego issues does it take to do that sort of thing and have that kind of need for recognition?

It is not someone I would want to study with. That is one thing I've learned in nearly five decades.

When I walked into my first class 48 years ago, I thought anyone with a black belt was a Master, a deadly fighting machine.

From 1973 to 2021, the most glorious moments have come when I have gained another small insight into a movement, an application, or the body mechanics that make a movement powerful in self-defense. I continue to study, searching for those insights, and I get them each time I study with my teachers.

Sheer happiness comes from gaining one of those insights, practicing it and trying to work it into my movements. It is not easy, but it is my idea of happiness. It is satisfying to take one little baby-step at a time.

With age comes, hopefully, wisdom. I am not a Master and I will never be one. What once appeared to be the road to happiness turned out to be the wrong path. The Road to Happiness is the road itself -- the journey of learning, growing, and improving my martial arts skills.

Travel the Road with me and study with me through my online school -- with nearly 1,000 video lessons plus live Zoom classes where you get personal coaching. Check it out at www.InternalFightingArts.com.