Form is Emptiness: The Depth of Tai Chi is Easy to Ridicule for Those Who Do Not Understand 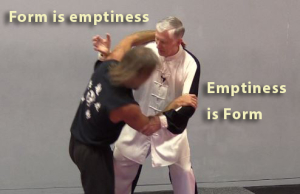 My daughter, Harmony had a yin/yang sticker on her notebook in 7th grade. She loved it. From the day she was brought home from the hospital and put into a crib in August, 1977, Bruce Lee posters had been on her bedroom wall and she was very familiar with martial arts.

But some of the girls in her 7th grade class accused her of worshipping Satan because of the yin/yang sticker.

They didn't understand and had been influenced by their parents, most of whom were Christians living in the Midwest.

Yesterday, I came across the "Heart Sutra," an important "rule" or aphorism in Mahāyāna Buddhism.

One of the key phrases that immediately made me think of Taoism, Zen Buddhism and Bruce Lee was this:

Form is nothing more than emptiness,

emptiness is nothing more than form.

You can say it a bit more directly: "Form is emptiness; emptiness is form."

It is a widely quoted concept that is visualized in different ways.

Bruce Lee liked to say that we should "be water." He said, "If you put water into a cup it becomes the cup."

Others, and I believe Bruce also talked about how a cup is only a cup because of the emptiness inside the form.

It is the emptiness that makes the cup useful. Without the emptiness, a cup would merely be a block of ceramic.

The same is true of a glass, a bowl, and you can take this concept on and on.

But to me, it symbolized the practice of Tai Chi (Taiji), and even though that type of quote can be ridiculed by other martial artists who don't understand Taiji, it is actually a good description of the martial side of the art.

When I step out onto a training floor, or out in the yard or in a park, and I begin practicing a form, it is an interpretation of the concepts that provides the frame of the movements, the structure of the body, the spiraling of the limbs and the relaxed internal strength flowing like a wave.

It is all intentional, it has form. But what I am doing as I work to achieve the body mechanics that I am after is not so easy to understand.

I am practicing form to achieve emptiness.

I can hear the MMA guys laughing, but just like the 7th grade girls hurling Satanic accusations at my daughter, they don't understand.

The practice of Taiji involves mastering a structure that allows you to lead an opponent into emptiness.

Using the ground path, developing the buoyancy of peng jin, making micro-adjustments with the kua like a buoy in the ocean, using whole-body movement and Dantien rotation and spiraling to add power to the movement -- these are some of the skills that the form develops (if you have an instructor who will teach you these things).

Any martial artist can punch and kick. Taiji includes punches and kicks, too, although the real skill in Taiji happens when someone touches you to apply force.

At that moment, all the form practice and the push hands practice and the freestyle work and takedowns with partners -- the practical application of ward-off, rollback, press, push, pluck, shoulder, elbow and other energies and methods -- should pay off in one specific way.

When an opponent puts his hands on you to use force or to put you down, he finds emptiness. You disappear beneath his force and, because the target is no longer there, he goes off-balance and your "form" (structure) and body mechanics take it from there to put him down instead.

I practice and teach Chen style Taiji, Xingyiquan and Bagua Zhang. I don't look at Taiji as a self-defense system that I would use if someone were standing three feet away and preparing to punch me. Taiji would not come into the question at this point. Xingyi would.

Once the punch is on its way toward my face and enters my power zone, Bagua would be a logical choice.

When they grab me, that's when Taiji shines, in my opinion, leading an opponent into emptiness and then lowering the boom. I maintain my mental and physical balance while my attacker loses his. I maintain my structural integrity even as I cause him, with his help, to lose his structure.

Form is emptiness; emptiness is form.

It's a shame so few Taiji students don't stay with it long enough, or have the right instruction, to realize this important concept. It has nothing to do with "cultivating chi." These are mental and physical skills that require as much practice as any fighting art requires for excellence. It's what I try to focus on in my study and my teaching. It doesn't come easily, but it does come when you eventually realize that the goal of all this form work is actually emptiness.