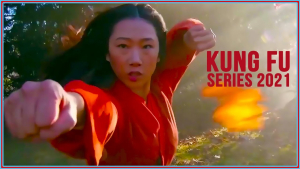 The new "Kung Fu" TV show strips the heart and morality out of the original, deciding instead of making us think, and giving us a roadmap of how to live a balanced life, it would be much better for modern audiences to appeal to 16-year-old girls and not make them think very much.
In the original series, the fight scenes captivated us, but the heart of the series was the morality of the monks. Their Taoist/Zen philosophy gave many of us a wake-up call that there were different ways of looking at the world than through the stained-glass windows of a church. For some of us, it pointed the way toward inner peace and the acceptance and tolerance of others.
The producers of the new series have hired an attractive young cast, threw in a sword with magical powers (Holy Green Destiny, Batman) which must be held by its rightful owner (shades of Thor's hammer). The plot is the same as many bad kung-fu films. "You bastard! You killed my teacher!" And they hint at a lot more magic to come.
Just what we need. Insert eye roll here.
Another thing we don't need: making it appear that you can achieve miraculous kung-fu fighting skills in three short years. Some of us who have studied martial arts for nearly 50 years see just how damaging that idea can be.
Kudos to the producers for using an Asian cast. A roundhouse kick to the head, however, for making it so shallow.
There is so much they could do. Why not bring the girl back to San Francisco and let her help people overcome their problems and see a better way to live, along with a little butt-kicking along the way?
There could also be some insight into the workings of a dysfunctional Chinese-American family, but it would help if, after spending three years learning the secrets of the universe, the lead character returned with a hint that she gained some wisdom along with kung-fu skills, but unfortunately, there is no hint of that wisdom in the dialogue.
Instead, I almost expect the second episode to show the lead character shopping at Abercrombie & Fitch.
And could someone tell the writers that when an attacker's arm is hideously broken the fight is over? And you know, like if you get kicked in the face five times, a sixth kick is not likely to be needed?
People right now are hungry for balance, kindness, and justice, not more magic and another "Tong war." And I hope the series brings more young people to martial arts schools, like the original series and Bruce Lee did. In the meantime, I can only hope the show "finds its legs" after a few episodes and becomes a little deeper. If the first episode of the new series is an indication, the producers appear to have ripped the heart out of the original "Kung Fu" series and are showing it to us beating in their hands before the audience, and the series, dies.