A Trap Door That Collapses Beneath You: An Effective Self-Defense Principle

Fifty years ago this summer, in 1971, I was working for my dad as a laborer in his ornamental iron business. I was 18 years old, had just graduated from high school and was soon to start college. My dad was very mechanical and was an artist with ornamental iron, doing everything from columns and railings to stairways in apartment complexes. I did not inherit his mechanical gene, so I was relegated to painting and helping carry materials.
One day, we were working on the third story of a new apartment building in Elizabethtown, Kentucky. The third floor balcony had some kind of temporary sheet metal flooring, but on this day, I didn't realize the flooring did not have support under it.
I was daydreaming and not being mindful about what I was doing when I went up to the third floor and stepped out on the balcony.
As soon as I stepped on it, the flooring gave way beneath my feet -- three stories up. It was as if I had stepped onto a trap door that suddenly, without warning, opened up.
To this day, I'm not sure how I did it. With no warning, as I was not paying attention, there was no floor under me and I was falling. In the fraction of a second that I felt myself falling, I reacted. Somehow, I jumped to the beam on the outer edge of the balcony and grabbed hold of some iron work we had installed the week before.
The flooring crashed to the ground. I looked down and began shaking inside. I could have been seriously injured or killed if I hadn't reacted without thinking, as soon as the flooring collapsed. But how did I jump when the floor was giving way beneath me? There was nothing to jump from, just sheet metal falling under my feet.
It's still a mystery, but maybe it explains why the concept of "empty" is one of my favorite "energies" in Taiji, but this concept is not limited to just Taiji.
"Empty force" is called "Kong Jin" in Taiji. It does not mean knocking someone down without touching them, as some less-than-honest people will tell you. 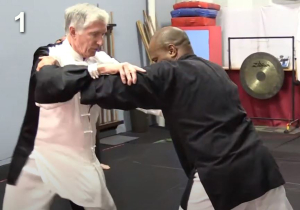 Empty force means that when an opponent tries to push you or seize you and apply force to you, whatever he is pushing on gives way like the flooring I stepped on, leaving him off-balance and vulnerable to a counter.
Sometimes, you can offer your opponent stiffness when they grab you. When you resist, he thinks you are going to continue using muscle-on-muscle, so he continues to use muscular force. Suddenly, you "empty," and he goes off-balance.
In the old "Kung-Fu" TV show, they said, "A Shaolin monk, when reached for, cannot be felt."
When an opponent reaches for you, when he exerts force, the target dissolves.
There is a popular saying in Taiji; "Leading Into Emptiness." 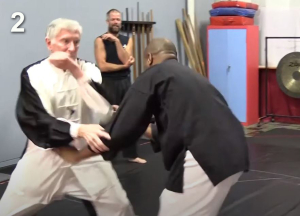 What does it mean? It can be self-defense for a physical, verbal or emotional attack.
For example, someone hurls an insult at you, wanting to "push your buttons" and make you react. You don't react negatively. You lead their verbal attack into emptiness. It is very good verbal self-defense. It is also a very good social media technique when you encounter someone spewing negativity on Facebook or Twitter to trigger reactions. Don't react with negativity. Lead them into emptiness.
Here is a physical example. A boxer like Muhammad Ali would lead his opponents into emptiness by sticking his face out toward the opponent, anticipate the opponent's punch, and when the glove came toward his face, Ali would lean back or slip to the side or go under, leading the punch into emptiness. Ali would use that split-second when the opponent was slightly off-balance to counter-punch.
But a third way to lead someone into emptiness is when they grab you to take you down. They always use muscular force, and very often, just emptying and not using force against force will put them off-balance just long enough to take advantage and put them down instead. 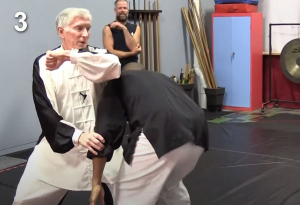 In Photo 1, I'm demonstrating this concept on a larger partner. He is pressing in on me, giving me force.
In Photo 2, I take all the tension out of my arm muscles and I step back, causing the support he had in my arms to collapse like the flooring I stepped on 50 years ago.
In Photo 3, he has fallen into the emptiness, losing his balance, and I am in position to come down on his neck or head with an elbow.
There is more about this on my website for members to watch in the Close-Up Self-Defense video (in the Push Hands section). It is also on the "Close-Up Self-Defense" DVD.
It takes practice to "empty" completely and suddenly so your partner falls into the emptiness. Even though I am "emptying" in the photos here, you can see that I am maintaining my structure and balance. The key is to let the "floor" (the part of the body he is pushing on) collapse under him, putting him off-balance just long enough for you to counter.
Practice by having a partner grab you and apply force, as if they want to take you down. Give them resistance for a moment and then completely relax and see what happens. When you collapse that part of your body, maintain your ground, peng, and structure. You can even do it with just one side of your body. Someone pushes on one side, you give that side to them. Empty it and let it go. It often sets them up for a good counter.
I still think of that day in 1971 when I do push hands. My goal is to have -- at all times -- the sensitivity that I showed on that morning, when I reacted without thinking, in the blink of an eye, as I took a step and suddenly there was nothing beneath my feet. If I had taken even enough time to think, "Oh crap!" it would have been too late to react.
In the meantime, I'm also working to provide my push hands partners with that "Oh, crap!" experience. They usually don't react as quickly as I did, but that's the idea, isn't it?
--by Ken Gullette