I Want to Throw Roundhouse Kicks on Muhammad Ali's Birthday

I want to throw roundhouse kicks.

I have been very angry during the past week-and-a-half. I am working very hard to center myself. Let me tell you why. 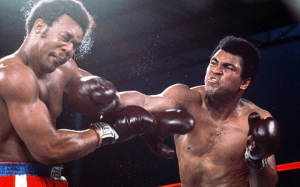 Muhammad Ali would have celebrated his 79th birthday today if he had lived, but unfortunately, he died of complications of Parkinson's Disease in 2016.
The night he defeated George Foreman (picture at left) to regain the heavyweight title was the night I realized I needed to stop being a racist. It was October 30, 1974. Muhammad Ali was fighting George Foreman in a fight that was held in Zaire and called the "Rumble in the Jungle."
Foreman was so strong it was scary. He was knocking other heavyweights out cold. Most people expected Ali to be killed that night.
I grew up in the American South in the 1950s and Sixties. I saw "White Only" signs on drinking fountains and bathrooms. I remember when blacks were not allowed to sit with us in the movie theaters. They had to sit in the balcony.
I remember when black kids could not swim with us in the public swimming pools.
When I was 15, I thought the coolest thing in the world would be to join the Ku Klux Klan. That's how the culture of the South affected me as a young white boy.
But in 1973, while I was in college at Eastern Kentucky University, I enrolled in my first martial arts class. I began reading about Bruce Lee, his philosophy, and I started reading books with the Taoist and Zen philosophy that I heard while watching the "Kung-Fu" TV show.
But I still had the South in me, and Muhammad Ali was a frequent target of our hatred. We hated him. We called him a "loud-mouthed" N-word. And he switched religions. He changed his name from Cassius Clay to Muhammad Ali. What a trouble-maker!
The night he fought George Foreman, college might have already started changing me a bit, but when the fight began, and I was listening to it being broadcast on radio, I was pacing in my dorm room, hoping Ali would get beaten. I was cheering for Foreman to hurt him.
The fight only lasted eight rounds. In the early rounds, Ali was on the ropes, being pounded by Foreman. Can you imagine the punishment? George Foreman could punch a large heavybag into submission. Imagine what he would do to someone's arms and ribs and kidneys!!
Round after round, Ali took tremendous punishment, and round by round, he survived.
Something clicked inside of me. It took a few rounds, but somewhere around the seventh, my perspective began shifting. Instead of a loud-mouthed braggart, I began to see Ali's courage, and the realization struck me like a right cross to the jaw. This man was letting the strongest boxer in the world pound on him. He had a plan, and he had placed himself in the line of fire.
I began cheering for Ali. When he suddenly knocked Foreman out in the eighth round, I jumped around my room, then ran up and down the halls shouting the news.
That was the bravest thing I had ever heard or seen.
I no longer saw Ali as a black man. I saw him as a brave man, and I began looking at other black people in a new light. I realized they suffered pain just as I did. They had the same needs I did. And they deserved the same respect I did.
I realized that so much of what I was taught in my culture was bullshit. For almost a year, I had been reading about the Taoist and Zen philosophies that presented such a different view of the world than the hatred of racism. How could I become "one" with the universe and the world around me if I considered myself better than another person?
It made no sense to be racist.
The answer was simple. If I continued to be prejudiced against people who were different, the philosophy that I was adopting would be a joke.
But like everything in life, including Qigong, and the ability to center myself, it took hard work and an ability to look inward, reflect and analyze why I thought certain ways and why I took certain positions on issues.
The philosophy woke me up to empathy.
Five years after the Rumble in the Jungle I met Muhammad Ali. It was 1978 and he had just defeated Leon Spinks to win back the heavyweight title. Ali was giving a speech at a rally in Louisville and I covered it as a reporter for WLAP radio in Lexington, Kentucky, where I was working. I got a front-row seat to the speech.
After the speech, Ali was going to hold a news conference at a hotel. I had a long walk to get to the hotel, so I was walking fast across a huge parking lot at the fairgrounds, where the rally was held, to the hotel where the news conference would be held.
Just as I arrived in front of the hotel, a limo pulled up with Ali in it. He got out and was followed by three or four bodyguards who were larger than he was.
I had a hardbound copy of his autobiography, "The Greatest," that I brought with me in case I was able to get his autograph.
For a few seconds after he got out of the car, there was a little space in front of him. I walked up and handed him the book.
"Would you sign this for me, Champ?" I asked, handing him the book and a pen. 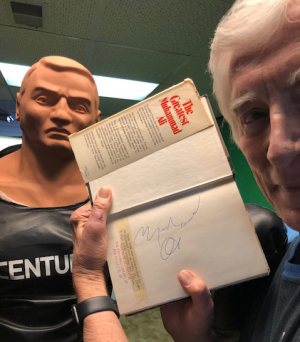 He took the book and the pen, scribbling his autograph as he walked, then held it out. By that time, he was being surrounded by people, and a bodyguard grabbed the book and pen and stuck them out behind his back as he walked with Ali. I pushed through the gathering crowd and managed to get the book out of his hand.
Then I went to the news conference, where Ali stood just a few feet away and I was standing with all the sports reporters, network sportscasters and other local media, watching and listening and enjoying my brush with greatness.
As years passed, I learned a lot more about Ali. In 1960, when I was only 7 years old, Ali won a gold medal at the Olympics and returned home to Louisville. He went to a restaurant that refused to serve him because he was black.
He was an Olympic gold medalist and still couldn't get respect from some white people.
Imagine how you would feel?
And yet, he was not an angry man. He tried to preach respect and human rights.
One day, he was visiting his mother in Louisville, and he was in a large motor home behind her house. A young white sports reporter knocked on her door to interview her. He didn't realize Ali was there.
"Oh, he's in the trailer," she said. "Just knock on the door."
This young white reporter knocked on the motor home door. Ali answered, let him in and they talked for hours. They became good friends.
That's the kind of man Ali was. How could anyone hate him?
Now why would I be angry today? I guess it's because of the riot held a week-and-a-half ago by the white supremacists in Washington, D.C. A lot of the people who stormed the capitol building were white nationalists.
I guess I have been angry because unarmed black men continue to be gunned down in the street by police in the United States. It was happening when Ali was young and it's happening now.
Perhaps, on Ali's birthday, it struck me that being a white nationalist, or tolerating them in any way, would be a violation of my goal of being a centered person. And perhaps this is my way of letting you know, since I am a teacher, that part of your training in the internal arts involves connecting -- not just with an opponent who you might never face, but also with the world, with the environment, with other animals, and with other human beings.
Being centered and connected does NOT mean being passive. Sometimes, it means standing up for what is right.
As you work on your martial arts, and as you try to become more centered and balanced, please understand that a good martial artist defends people who are weaker and are being attacked.
Self-defense is much more than throwing punches and kicks. Being a martial artist means you are working to master yourself, too.
The world is made a safer place when we all do our part and connect with others, perceiving them as being one with us, and when we realize that silence is the fuel that gives more power to evil.