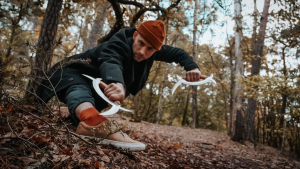 Jakob Pang Isaksson, a Bagua Zhang teacher in Stockholm, has lived an interesting life. In 1998, he won an MTV Break Dance Competition and appeared in a Run DMC video, "Sucker M.C.'s." Watch the video here.

A few years later, he traveled to Wudang Mountain to search out gongfu instruction. He returned to China later and spent three years there. He won medals at a large wushu competition and was selected to perform and compete with the Guang Zhou University professional Wushu Team. Eventually, he found his Bagua Zhang teacher, Li Jian Min, a teacher of Jiang Style Bagua Zhang.

I talked with Jakob Pang Isaksson about his experiences and it made for as very interesting podcast.

Go to the podcast page where you can listen to it or download the episode.

Book Review: Wandering Along the Way of Okinawan Karate: Thinking About Goju-Ryu by Giles Hopkins 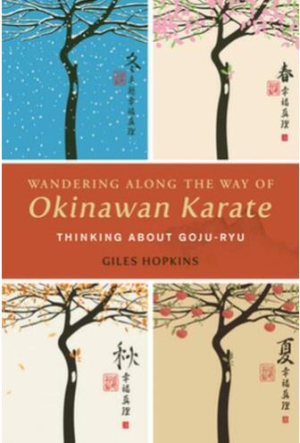 I don't often read karate books. One of the first martial arts books I ever bought, in 1974, was a karate book, but it has mainly collected dust on the bookshelf for decades now.

I have not found karate books very helpful for me, since I study and teach the internal Chinese martial arts. Most of them have been about technique, with dry information about stances, punches, blocks, and sequences of kata movements.

My opinion changed when I read a new book by Giles Hopkins that is a great addition to my martial arts library: "Wandering Along the Way of Okinawan Karate: Thinking About Goju-Ryu," published by Blue Snake Books.

Hopkins is a dedicated martial artist and an outdoors enthusiast. He approaches nature and his martial art with a philosophical attitude that immediately appealed to me. He sees the connection between the art he practices and the natural wonders he encounters while hiking along a trail or walking in the woods. His intellectual approach to the movements of kata goes "under the hood" in a way that is more meaningful than simply describing technique.

Why do we notice the leaves mainly when they burst into different colors shortly before they die? It is an observation Hopkins makes that easily translates into our approach to martial arts and to the people in our lives. We take many aspects of the arts for granted -- the rituals surrounding our practice; some of the movements that we have performed thousands of times.

As I read this book, preparing to turn 68 years old in a couple of months, and having endured physical hardships the past decade, this passage also hit home with me as I thought about how we take our own youth, strength and health for granted, and the glorious ability to perform at our peak. When we get to the point where we understand that we can't practice these arts forever, or when our physical abilities begin to slip away, it is ironic that this stage of life causes us to understand the real beauty of the arts we have been practicing for so long, and the reasons they are so important to us, like a loved one who suddenly has a terminal illness and you become all too aware of the relentless ticking of the clock.

When we are young, many of us take up martial arts so we can learn to fight better; to defend ourselves. As we get older, those of us who remain in the arts look deeper, and some of us carry the arts into our daily life in ways that make life and the arts more fulfilling.

Like me, Hopkins is no spring chicken. One of his chapters is titled, "Ah, He's Just Old, What Does He Know Anyway?"

Perhaps you need to have some years under your black belt before you can write a book like this.

He begins most chapters with something he has observed during one of his walks in nature, and he connects it with his karate. The book is divided into sections corresponding to the seasons. As he discusses something from nature, the transitions into karate are sometimes a bit clunky and repetitive. I grew a bit tired of passages that I slightly exaggerate when I describe this way: "I saw this rock along the trail and it reminded me of (insert name of kata or movement here)." There are more subtle ways of blending these concepts and messages, but if that is the worst criticism I have about the book, it is a very minor one. The only reason I mentioned this is because I was a journalist who hired and trained reporters and coached their writing. This is more a coaching comment than a criticism. It is an excellent book.

Hopkins sees deeply into the movements of kata, uncovering fighting applications, or "bunkai," that can turn on some lightbulbs for any martial artist of any style. One of the applications he discusses made me realize that a certain movement in a Tai Chi form that I have practiced thousands of times can not only be used as a joint lock against an elbow, as I always thought of it, but it can also be used to break an opponent's neck by twisting the head.

Hopkins explores interesting topics along with his photos and descriptions of movement, technique and kata. He wonders how these arts can be useful in an era when most of us do not have to worry about fighting. He thinks about the usefulness of pushing the creative boundaries when looking for the fighting applications inside kata movements, and he is honest enough to suggest better ways of teaching than to hold your students to silence with counterproductive responses to a question such as, "If you have to ask, you are not ready to learn."

The very first class I taught when I earned my black sash and recruited my own students included young guys who wanted to see just how good I really was, so they asked questions that made me realize I needed to raise my game. I had to study harder, practice harder, and be as good as my sash indicated. When you have a black belt, you are considered an expert. I think some teachers discourage questions because the wrong one can expose the true lack of depth in the teacher's knowledge.

A lot has been lost in the modern practice of martial arts. It is certainly true in much of the practice of Tai Chi, which has been watered down from a brutal martial art to an exercise for older people or "moving meditation" practiced by millions around the world. And when my granddaughter earned a black belt at a local taekwondo school and did not know how to throw a good punch, and I watched obese black belts strutting around her school who couldn't throw a good kick, I assumed that modern karate had gone the same way -- tense, muscular and simple.

It is wonderful to read a book on karate that is intellectually stimulating and offers insights about Hopkins' art, Goju-Ryu, that also informs my own practice. You don't have to study karate to appreciate it.

I highly recommend "Wandering Along the Way of Okinawan Karate." It is the first book by Giles Hopkins that I have read, but it will not be the last. I am ordering his earlier book today, and will keep an eye out for future books.

It is obvious to me that Hopkins is an outstanding teacher and the type of martial artist I would enjoy talking with and comparing notes. May he enjoy many more hikes in the woods, many more books on the market and many more seasons of training.