Home Archives Profile Subscribe
A System of Teaching Tai Chi, Xingyi and Bagua with a Focus on Internal Body Mechanics
How to Lose Gracefully and Why Losing Can Be a Positive Thing

What Sean Connery and James Bond Taught Me About Fighting 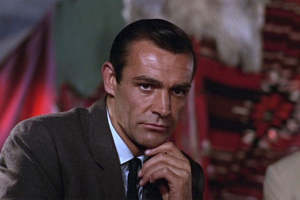 Sean Connery passed away at age 90. The news swept across the world today, and if you are a man in my generation, it's a sad day.

My mother would not let me see a James Bond movie until the fourth Bond film "Thunderball" came out in late 1965. We were very conservative Christians, and she thought the movies were sinful because they showed drinking and (gasp!) sex between men and women who were NOT MARRIED!

She thought I would burn in Hell if I ever saw a James Bond movie.

But by the time "Thunderball" came out and I was nearly 13, she relented. My buddy Ed McCaw and I went to see it at a theater in downtown Lexington. We walked in during the long scene when the atomic bomb was stolen from the downed plane. We stayed all the way through the movie the second time through. I couldn't believe what I was seeing.

I thought Connery was the coolest man who ever lived. The way he walked, the way he talked, and the slightly sarcastic, confident sense of humor had a big impact on me.

But the way James Bond fought in those early films also had an impact.

When Sean Connery played 007, he often found himself against much stronger, tougher opponents, but his resourcefulness often helped him win the fight. Whether he was fighting Oddjob in the vault at Fort Knox, "Red" Grant on the train in "From Russia, with Love," or the Japanese martial artist in "You Only Live Twice," he found a way to win. 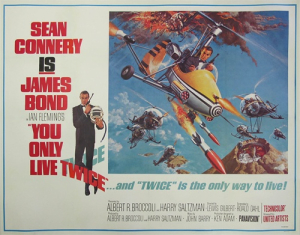 One of the radio commercials used in the summer of 1967 to advertise "You Only Live Twice" went something like this: "They rush him from all sides. FIFTY karate experts whose hands can slice through rock. The odds...FIFTY to one. THEY haven't got a CHANCE." Listen to the original radio ad here.

Oh, man. I still get cold chills listening to that radio ad.

As a kid, and as a young teenager, I was often the target of bullies. For some reason, they were attracted to me like fat to a mother-in-law, but they made a big mistake when they pushed me to the point when I could not walk away.

They did not realize they were picking on a guy who enjoyed fighting. I always tried to avoid it, but if I could not avoid it, once the fight started I considered it the ultimate one-on-one competition. It was the ultimate sport. I never lost a fight in my life.

And from watching James Bond movies in those days, I realized that the better, stronger fighter does not always win. Usually, the smarter fighter wins.

The second-to-last real fight I had was when I was 17 years old in high school. A guy named Charlie wanted to fight. The disagreement started in Mr. Fife's geography class and we took it to the boy's restroom there in the Stone Building at Lafayette High School.

It was a very small restroom and we faced off.

Charlie hauled off and punched me in the jaw. My head exploded in pain, and sparks seemed to burst in front of my eyes like fireworks.

It was clear that he was a much better puncher than I was.

So I moved in, clenched with him, and slammed him into the side of a stall.

How would Sean Connery handle this, I thought. Well, since he appeared to be a better boxer, I would stop him from being able to punch me.

I threw him to the ground.

He tried to get up, but before he could reach his feet, I slammed him to the ground again.

Each time he tried to get up, I slammed him into the wall or back to the ground.

Finally, exhausted, he gave up. We went back to our classes. I won the fight.

The moment I walked out of the restroom, I thought, "Sean Connery would be proud of that one."

Self-defense is a lot more than physical strength or even technical skill. Often, it is about awareness, not being there, and if you can't escape the fight, it's also about how you can use your surroundings or items you can pick up.

And it is about keeping your cool at all times. Or, as I learned in the internal arts, remaining centered at all times.

Tonight, I will raise a glass to this fine actor. I have watched his Bond movies countless times. I have them all on Blu-Ray and catch them when they pop up on cable channels. He will always be an inspiration to me in many ways.

I salute you, Sean Connery. The bullies who picked on me might have other feelings, however.