Home Archives Profile Subscribe
How to Embarrass or Insult a Teacher When You Do Not Observe Martial Etiquette
A System of Teaching Tai Chi, Xingyi and Bagua with a Focus on Internal Body Mechanics 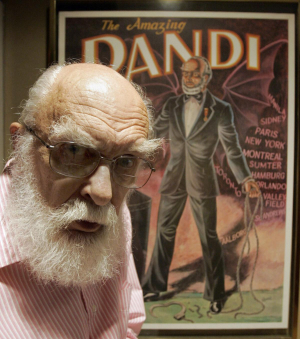 James Randi has passed away. He was a magician and a critical thinker who inspired many of us as he debunked supernatural BS, including chi powers. He had one million dollars in escrow that he offered to anyone who could prove, in a double-blind setting, that they could perform any supernatural acts that they claimed to do.
Richard Mooney was one of the martial artists who claimed to knock people down without touching them. He was featured in a martial arts magazine many years ago now, with photos showing his students falling to the ground without being touched.
Mooney tried to claim Randi's million dollars, but it was a double-blind test. Around 18 people were chosen, and none of them knew what Richard was going to do. One by one, they stood behind a screen as Mooney tried to knock them down without touching them. None of them even flinched.
In a double-blind trial, video of the event was given to judges who also did not know what Mooney was attempting to do. The judges decided that nothing really happened. Mooney did not get the money.
Randi inspired me to offer $5,000 to any "chi master" who could knock me down without touching me. I have challenged several of these people, and even though they willingly take the money of students, and they charge money to give workshops, they refuse to accept my challenge.
Ironic, isn't it?
I challenged Mooney before I knew he had failed at the Randi Challenge. I told him I did not believe he could knock people down without touching them, and I would drive down to his school to see if he could do it to me. He replied with some rude emails. That isn't what you would expect from someone who had tapped into the secret of the Universe, is it?
Mooney's failure at the Randi Challenge was supposed to be kept quiet, according to an arrangement with the Randi Foundation, but word leaked out a long time ago.
Mooney isn't the only one who failed James Randi's Million Dollar Challenge, and he is not the only one of these martial arts "masters" who has turned me down.

He was just one of the first. Many of the people I challenged sent rude or insulting replies. The business manager of one "master" said he was coming to "test" my skills. He said he wanted to do push hands. I told him it would be no-holds-barred fighting. He didn't show up. Imagine that.
Nancy and I wanted to meet Randi, but ran out of time. He inspired many people to think more critically, and to not believe everything someone in authority tells you, ESPECIALLY if he is a martial arts "master."
Don't check your brains at the door of a martial arts school, my friends.
Here is a link to a news report on James Randi's death.