Flowing Around Another Kung-Fu Obstacle -- a Pacemaker

Two weeks ago, a cardiologist put a pacemaker the size of a matchbox into my chest and ran wires down into my heart.

You have to go with the flow, right?

Be water, my friend, right? Flow around obstacles and find your way.

I try to remain centered and be water, but this took me by surprise. My cardiologist and I had been talking about it for years, but the decision to do it was not made until about five days before we put the pacemaker in.

I still suffer from atrial fibrillation, also known as a-fib, and that causes my heart to beat erratically. Just sitting at my desk, or on the couch, my heart will suddenly jump from 60 beats per minute to 155 bpm, as if I am running the 100-yard dash. Then, after a few seconds it will drop to 70 beats per minute, and a couple of seconds later it will jump to 140 bpm.

This can go on for hours. It makes me tired, and if I bend over, it makes me have to breathe heavy.

A-fib has been the number one obstacle in my life. When doctors tried to fix it three times in 2008, it cost me the use of my left lung.

But my heart has been beating in crazy, dangerous ways for the past two or three months, so the time came.

A pacemaker does not fix the erratic heartbeats, but it allows me to take medication to slow my heart rate and try to cut down on the rapid beating.

In my hospital room before the surgery, I asked, "When can I practice Tai Chi again?"

"Today," he said. "We want you to move your left arm so you don't get a frozen shoulder."

"When they put it under the muscle, the recovery is more painful," she said. "We want you to move your arm, but you will be surprised by how little you will want to move it."

They wheeled me into the operating room and kept me awake during the procedure, but they put a hood over my face and pumped me with enough goofy juice so that I could hear everything, and feel some things through the numbness, but I didn't care. I was in la-la-land, and that was just fine with me.

A lot of pacemakers are placed under the skin. My doctor cut the muscle and placed it under the muscle. I could feel him poking and pushing and prodding it, pushing it down closer to my heart. I did not feel him running the wires, called "leads," down into the heart chambers.

The surgery lasted about an hour, then I was wheeled back to my room to shake off the grogginess.

Because of the coronavirus, Nancy was not allowed in the hospital with me, but she picked me up at the door.

So I took it easy and decided to let it heal as quickly as possible and not stress it.

Nancy helped me tremendously, as she always does. 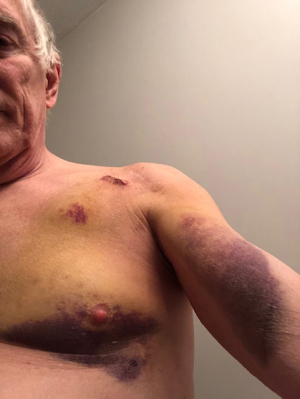 I now have a hump on that part of the chest. When I do heavy push hands and grappling-type throws with partners, I'll have to wear chest protection and make sure I don't take any hard hits or kicks to the pacemaker. Just one more adjustment to make as I get older.

I taught my first class six days later, a live Zoom Xingyi class with members of my website from Texas to Sweden and Germany.

I have taught my regular Monday-Wednesday-Friday Zoom classes since.

After a little more than two weeks, I can now move my arm normally with no pain, and I'll do my live Bagua class at Noon today.

I went in the week after it was installed. A technician with an iPad said, "Okay, I'm going to test your leads. You may feel your heart race when I hit this button."

She touched the screen of her iPad and I felt my heart race for a few seconds. It made me take an extra breath or two.

Then she hit another button and the heart raced again for a couple of seconds.

So they can control my heart with an iPad??

I hope Nancy doesn't get that app on her tablet. She might get a lot more out of me around the house.

In the end, this pacemaker may be a good thing and hopefully, I'll be able to practice more and teach even more. One of the reasons I haven't done more workshops in the past few years is the unpredictable nature of my health. Hopefully, this will help smooth things out a bit.

So we flow around the obstacles and find our way, like water.

At 67 years old, now with a pacemaker to catch my heart if it falls too low, it is time to keep pushing forward in these amazing arts. I don't think I'll be able to quit practicing until the heart completely stops. Hopefully, that is a few years away.