Home Archives Profile Subscribe
The Tao of Mr. Rogers - The Secret of Being Kind and Forgiving
Real Self-Defense Requires Fire and Fury, Not Punch and Stop

Keep it Simple for Ultimate Success in Self-Defense 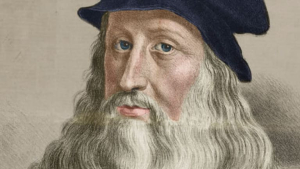 Leo Da Vinci
Leonardo da Vinci was not a fighter, but he knew something that can help you if or when self-defense techniques are needed.
There is a well-known Chen-style Taiji instructor who put a video on YouTube recently showing some fighting applications.
The applications looked really cool, but something did not seem right, so I decided to test them with students at the next couple of practices.
I very quickly discovered what was wrong with the applications. They did not work if the opponent did not cooperate completely.
If my student gave me the slightest resistance, or continued to fight as he would in a real-life situation, the application fell apart instantly.
My students and I watched the video together. We were quickly disgusted at how the student in the videos was just standing there limply even when "locked" and then allowing himself to be thrown to the ground.
That is not the way a real-life fight happens.
No wonder the internal arts have such a bad reputation for real self-defense!
da Vinci Knew the Secret
How many Bagua videos have you seen where the instructor does flowery, circular movements and three or four techniques on an opponent who appears helpless?
I have seen FAR too many. But when you try those flowery sequences on an opponent who is not playing along, they simply don't work.
Leonardo da Vinci said, "Simplicity is the ultimate sophistication."
He could have been talking about martial arts.
If you watch the self-defense applications of movements and forms on my website or on my DVDs, you should notice one thing -- they can all be done against an opponent, even if he is not cooperating.
Discard What is Useless
Another important artist, Bruce Lee said "discard what is useless."
If an application is not realistic, I throw it out.
It is okay to practice a theory or a principle, or a technique. But if it does not work as advertised, if you pressure-test it and it falls apart, why continue to practice it?
Throw it away!
It takes a long time to learn the body mechanics and the smooth application of those mechanics in movement. But once you learn the mechanics, and learn to move with internal strength, the fighting applications are simple.
Anyone who has wrestled with a friend, or sparred with fellow students, or sparred in a tournament or other competition knows that many of your best techniques don't work when you want them to work. Your opponent has the same goals you have -- to do good techniques, to avoid your techniques and to win the match.
Pressure-Test Your Arts
No one is going to stand there while you wrap an arm around their neck, step behind them, hit them and then throw them.
Some applications work at just the right time, in the middle of a fight, when you find yourself with the right opportunity. 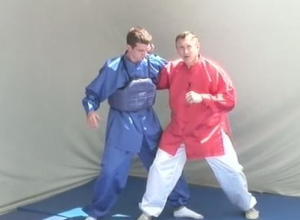 Punch the Ground Part 1
I'm thinking of a movement such as "Punch the Ground" in Taiji.
You would have to be in a position where you could easily snake your arm underneath and around an opponent's shoulder and be in the right position to put him on the ground. See how my right leg is blocking his right leg?
It might happen in a grappling, clinching situation, if you are also able to get him off-balance. But if you go into a fight thinking, "I am going to do Punch the Ground on him," you are doomed to favor.
In the photos shown here, my partner is not fighting me. Imagine how I would have to soften him up and distract him before I could pull this off! It can be done, but it would require the element of surprise. 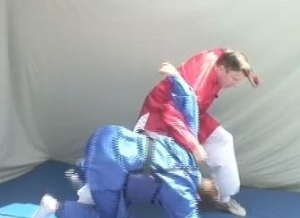 Punch the Ground Part 2
The Holy Grail of Fighting Skill
A lot of applications are successful only if the opponent is distracted, punch-drunk, in pain or off-balance. When any particular opportunity occurs, the "holy grail" of fighting skill is to be able to take advantage of that opportunity without thinking about it.
One of my students talked for 10 years about how, the first time he and I sparred, I handled everything he gave me just using Xingyi's Pi Chuan, "Splitting Palm." No matter what he threw, that is the technique I used.
Pi Chuan is simple, direct and effective against many different attacks. It is not flowery or complicated. The simplest techniques always are the most effective.
I urge you to practice some of your favorite moves from a form against a partner who will not cooperate. Try them in a sparring situation, too. It will give you an education.
Try a simple application, and then a more complex one, but tell your partner not to cooperate at all. See what happens and how you need to adjust the application or "soften" your opponent up before executing it.
Sometimes people ask me, "What would you use if you were attacked on the street?" They ask if I would use the Taiji "energies" and methods, or some flowery Bagua circular movement.
I disappoint them when I say, "I will probably try to drive their heads off their shoulders with Beng Chuan and get it over with."
If it were a clinch situation, at that point I might use the "energies," and hopefully they will be ingrained in my subconscious enough to do so, but I will be using those energies to set my opponent up for a simple technique that will bump him away, unbalance him, break him and put him to the ground.
All of this requires practicing with a partner who is not playing along. Any instructor of Xingyi, Bagua and Taiji should know this. When they put videos showing these unrealistic techniques on YouTube, some viewers may go "oooh" and "aaaah," but they will be impressed only long enough to try them on a partner who does not play along and protect the teacher's ego.
I love complex techniques. I love the flowery, circular movements. They are good concepts to practice. Just remember that self-delusion is very common in martial arts, and in real self-defense, simple is best, and simplicity is the ultimate sophistication.