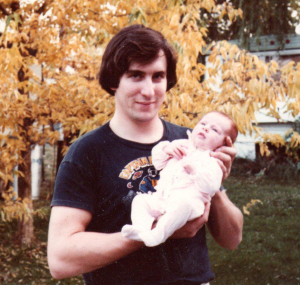 A few days ago, my daughter Shara would have celebrated her 39th birthday. She was born on September 12, 1980.

Six weeks later, on a chilly October morning, the morning after she broke into a big, toothless grin for the first time, causing me, her 3-year old sister Harmony and her mom to burst out laughing, we found her dead in her bed from Sudden Infant Death Syndrome.

Crib death came in the night and took our little red-haired baby girl.

We were devastated, shrouded for a couple of years in grief that felt like a weight vest. Over the years, the grief diminished to a manageable state; life went on, and after being knocked into an emotional hole in the ground, I managed to lift myself up and re-balance.

The philosophical Taoism and Zen thinking that I tried to adopt in the years before Shara's death had put down roots.

This philosophy is not about not feeling. It is not about being passive. It is about feeling fully, but not letting destructive emotions take control.

It is about letting them wash through you and continue moving, opening yourself to other emotions that will come if you persist through the pain.

Earl is a World War II vet who fought in the Philippines, carrying a mortar and fighting many battles. He saw friends die, but he came through with only one scratch from a piece of rock shrapnel that a bullet from a Japanese gun kicked up next to him.

Earl returned home after his fighting was done suffering from PTSD. He received help and he recovered, living a good life with his wife, Mary, and raising three sons who all have done well in life. Earl retired many years ago from John Deere & Company.

Nancy and I bought the house across the street from Earl five years ago, about one year after Earl's wife died.

Earl and I developed a friendship that has become one of the most important things in my life.

Sitting in the booth at the family restaurant, I showed him Shara's picture and told him she would have been 39 years old that day. 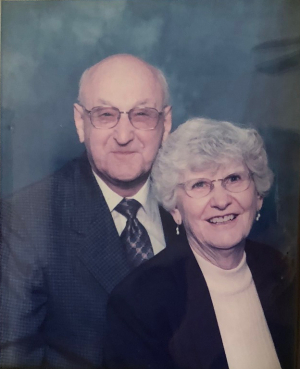 She was sitting up in her bed at the nursing home. Earl had been there all day, and it was time for him to go home and get some rest.

The next morning, he got a call and he went to the nursing home. She was still sitting up in bed, but she was gone.

As Earl told me this story, his chin was quivering and tears came to his eyes.

"A true test of character is the way we deal with loss as we get older," I said. "Losses start piling up. How do we balance ourselves and not let the ups and downs of life capsize us?"

It is a real test, Earl agreed.

I described to Earl how, when my daughter's body was in the casket at the funeral home, I took her out and held her in my arms, sitting near the casket, mourning as visitors came in. It must have been quite shocking to see. I was so grief-stricken that I could not bear the thought of her lying alone in the coffin. Wasn't I supposed to protect her? Isn't that what a father is supposed to do? It felt as if I had failed in the one job that I had.

"She is in a better place," some well-intentioned people would tell me.

"No," I would gently correct them. "The best place for her is with her daddy."

I know they meant well, but that was a stupid thing to say. All they needed to say was, "I'm sorry." Remember that the next time someone you know suffers a loss. Don't tell them its "meant to be," or "they're in a better place." Just say you are sorry and you are here if they need anything.

As I held my daughter's body in my arms, my little Zen voice in the back of my mind was saying, "You might appear as if you have lost your mind, but you haven't. Death is part of life. If you accept the joys and happiness of life, you must accept this, regardless of how unfair it is."

Earl and I talked about this at lunch, and about Mary, and losing a spouse after more than 60 years of marriage.

Is it easier to be the spouse who dies first? Earl thinks that is the easiest route. It is difficult, he said, to live without her.

And so, in both cases, and in many other instances of loss in your life -- the loss of a job, the loss of a marriage, the loss of money and status -- how do you find your balance again after being knocked down?

The answer for me is to enjoy the good parts of life and to put my head down and persist through the bad parts.

The yin and the yang are ever swirling and mixing and separating. In the best of times, you can enjoy the happiness life brings, but deep inside you know that something negative will happen at some point. It is the nature of things.

When something negative or tragic happens, if you try to accept it as part of life, put your head down and try your best to get through it, the wheel will turn and good things will happen again.

But I also remember how we laughed at Shara's grin the night before she died. I remember changing her diaper, her eyes staring into mine, trying to understand this new world, and I could see intelligence in her eyes.

Earl laughs about the trips he and Mary took, and how much they loved dancing and hanging out with other couples.

A year after Shara died, Belinda was born, a very funny little girl. She turns 38 this month, and works as a public defender in Cincinnati advocating for abused and neglected children. I can't imagine life without her.

The wheel turned. I kept my head down and walked on.

These deep losses have changed us, but in this universe, change is the only thing you can depend on. Everything changes. Why should Earl or I be any different?

The art of self-defense takes many forms. Sometimes, an attack may come from a person with misguided intentions. An attack can be physical and it can be verbal or emotional.

Sometimes, self-defense requires something other than martial skill or people skills. It requires the internal, psychological strength to handle what can seem to be an attack by nature itself, even though it is not an attack; it is simply life happening, throwing us off-balance and taking us to the ground.

Earl and I have almost 165 years between us. Persistence and determination, we agreed, were keys to re-balancing. In my view, the centering skills that I have taken from my philosophy have given me the ability to realize that nothing life throws at me is personal. None of us gets out of this alive.

Why do bad things happen to good people? Because good and bad happens to all people. How you deal with it is what counts.

One of the reasons my friendship with Earl is so precious is that he and I both realize it is not going to last very long. With some of my health issues I could go first, but in all likelihood I will be the one left behind to regroup. He knows this too, and he says he is ready to go if the time comes, which he expects will happen before long. We look forward to the time we spend together having lunch, sitting outside in front of his garage, or talking in his living room.

You cannot live in the past, whether your past is happy or tragic. You can work and plan for the future, but you have to understand that nothing is guaranteed. 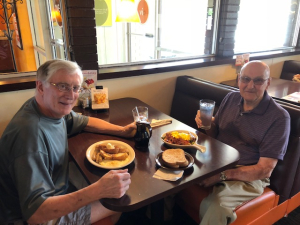 Ken and Earl having lunch at Village Inn.

And so we are left with this moment; this point in time. And on this day, at this moment, I was having lunch with my 98-year old buddy, talking about our lives, both good and bad, sharing the occasional off-color joke, and just enjoying each other's company.

After a few minutes talking about Shara and Mary, I said, "Let's talk about something lighter so we won't start crying in our food."

So we started talking about the battles he saw in World War II.

How's THAT for lighter conversation?

Thank you for sharing, sirs.

Yeah, what a lovely philosophical way of looking at the whole gambit of ones life.....Thank you for sharing.

Thank you Ken. This post is very timely in helping me and my loved one go through a tough situation.

I'm sorry for your loss. I'm glad the post helps.

That was a very touching post Ken. I am sorry for your loss and Earl's loss also.
By the way, you are a great writer.
Take care,
Steve