Say No to Noodle Legs -- Do Not Collapse Your Legs in Tai Chi, Xingyi and Bagua 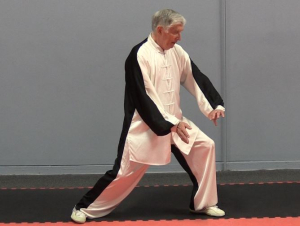 See the two images here in this post?
The top image shows a mistake that I see a lot. In fact, there is a good chance you are making this mistake in your forms, especially Bagua and Taiji.
I spent several years making this mistake and I was never called on it.
Then, I was training with Chen Huixian and her husband, Michael, and they pointed it out. I was doing "Buddha's Warrior Attendant Pounds Mortar" and it was pointed out that my rear leg was collapsed.
In the top photo, my right leg is collapsing. I have lost my peng. 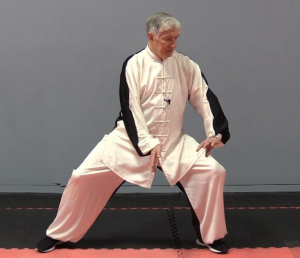 In the lower image, I am maintaining peng through the legs.
As you can see in the upper image, my stability and strength is far less with a collapsed leg. I cannot "defend from all directions."
It is a lot more difficult to maintain peng in the legs. It helps to relax and sit deeper into the kua, and it requires a lot of mental focus until you break the habit of collapsing.
That one bit of advice changed a lot of my stances. And now, I see people collapsing their legs a lot; even some people who are called masters.
Sometimes, there is no one to tell a master that he has gotten lazy, or perhaps his teacher did not teach him this particular thing.
Don't have "noodle legs."
Try to find a mirror so you can watch to see if your legs are collapsing. Watch for it in all movements. In Bagua, I see it a lot in movements such as "Sweep the Rider from the Horse" and similar movements.
It happens often when you are shifting weight -- the knee on the non-weight-bearing leg will collapse.
Remember to maintain peng throughout the entire body at all times.
The photos are taken from my book, "Internal Body Mechanics for Tai Chi, Bagua and Xingyi." If you don't have it, you can click the link and buy it through my website or through Amazon.
--by Ken Gullette