45 Years in Martial Arts - Time Flies When You're Having Fun

45 years ago tonight, on September 20, 1973, I entered my first martial arts class in my hometown of Lexington, Kentucky.

The crowd of new students that night spilled into the parking lot. I was 20 years old, a student at Eastern Kentucky University.

I had no idea that I would still be in the arts 45 years later, and that I would be working at it full-time after more than four decades.

I stayed in my first school long enough to earn a brown belt, then I began exploring, studying Taekwondo, Tien Shan Pai kung-fu, and discovered the internal arts in 1987. In 1991, I was working as news director of the TV station on the Iowa State University campus in Ames, Iowa, and was practicing in the gym when the coach of the ISU Boxing team, Coach Terry Dowd saw me and invited me to workout with the team. I was 39 and they sort-of adopted me. I trained with the boys for two years. 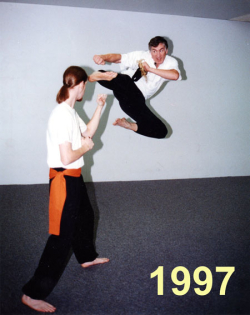 Since 1973, martial arts and Eastern philosophy have been an important part of my life. It has become part of who I am.

I'm pondering some of the lessons I've learned over the past 45 years. The martial arts attracts people with controlling personalities sometimes, and sometimes the arts attract people who want others to see themselves as mysterious, possessing supernatural powers. There are really great, caring people and also those who will lie about their backgrounds as they take your money. It attracts some people who think critically and others who will believe almost everything their teacher says. There are people who maintain their humility and there are others who troll the internet and Facebook and slam everyone they see.

But beneath all the noise are these self-defense arts. After 45 years I still think they are cool, fascinating, and I take them seriously but I still have as much fun practicing now as I did when I was 20, even though after all these years, losing a lung and developing a heart issue has made it a little more challenging.

45 years went by quickly. I hope to keep training, learning and improving for years to come.

Thanks for being part of my journey by reading this. 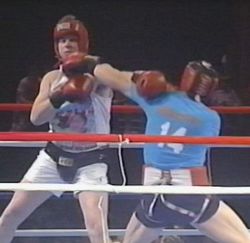 It is a B.S. argument, but it is the current fad in martial arts discussions.

"If you can't take on an MMA fighter, your martial art is useless."

If you did train all-out, like a "real" fight, you and your partners would not train very long.

Unless you are in a full-contact fight with no rules at all, it is very difficult to defend the way you want to.

If a shooter comes in, I want to knee them in the face and strike down on the back of their neck with my elbow. If someone clinches, I want to bite a hole in their arm.

If anyone practiced realistically, in any martial art, we would all take turns going to the hospital. 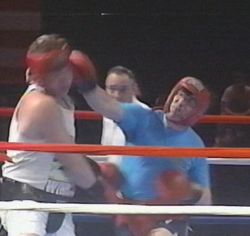 We were practicing clinches last week, and we laughed at one point because one of the best defenses is to just reach over and gouge out your opponent's eyes. But we were working on techniques more fitting to our art and we were not hurting each other.

At one point, I asked my partner to put me in a choke hold. He did. I faked a bite to his arm to get the point across.

In a real fight, if someone got me on the ground and wrapped a leg around my throat, he would be screaming when I bit a hole in his thigh. You think you are tough enough to take that pain? Not likely.

You do not have to hurt anyone or be hurt, or defend yourself against a trained young MMA fighter. You can still be a good fighter and defend yourself or others when necessary.

I was in the Toughman Contest in 1991. I was 38 and my larger opponent was 25. I won my full-contact fight, but afterwards, there was a dull ache in the center of my brain from being punched that I had never experienced and could not pinpoint. The photos on this post show highlights. I am in the blue shirt.

It convinced me that full-contact fighting is for people who don't look very far down the road. 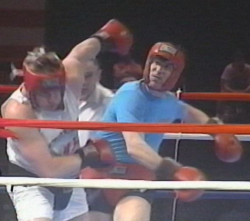 That does not mean we can't learn to defend ourselves or others, as I proved in that fight.

The macho guys who now say you have to fight a trained MMA fighter or you aren't a martial artist have my permission to damage their bodies and get all the concussions they want.

Using Internal Principles in Grappling -- How to Escape a Clinch

Can Tai Chi, Xingyi or Bagua be used against a grappler?

A lot of macho types say no, but that's because they do not understand the internal martial arts.

Tai Chi has been slandered, maligned and unfairly criticized during the past year or two because a couple of people who claimed to be Tai Chi "masters" (they are not masters) had the stupidity to take on a trained MMA fighter and they lost. Badly.

I had a Wing Chun guy come into my school once and he wanted to spar full-contact. I told him we didn't do that, but we would gladly spar with him and do light contact. We hit him in the face anytime we wanted. My top student and I both tried him out. It was pitiful, but I did not judge Wing Chun based on this guy.

The internal arts have principles and body mechanics that work if you follow them, just like any art. Sometimes, you simply have to fight. That includes punching. But sometimes, you use body mechanics to take advantage of your opponent's force or to break his structure.

This past Wednesday night at practice, three students -- Justin Snow, Colin Frye and Chris Andrews -- worked with me as I demonstrated how to escape from a clinch. We had a good time playing with this.

Justin and Chris are both around 300 pounds. They are strong guys, around 30 years old. They have experience fighting. Real fighting.

I am 65 with one lung, heart issues, and I lost a lot of muscle mass when I got sick 9 years ago.

They still can't hold me in a clinch if I use internal principles. And I can't hold them, either.

We had fun playing with this. Enjoy the video and I hope you learn from it. And remember, 850 video lessons and pdf downloads are available 24/7 on my membership website at www.internalfightingarts.com. Check it out.

Who is Chen Huixian? A Tai Chi Video You Need to Watch

There is a Taiji instructor -- a Chen family member -- living in the Kansas City area who every Chen Taiji person in the U.S. should know.

I have trained with several top Chen masters, and I believe she is the best instructor of them all. She is highly skilled, a traditional teacher (in other words, her classes are intense), but she has a sense of humor that makes her classes enjoyable. Also, she is interested in the people who attend.

Her name is Chen Huixian. She grew up in the Chen Village, met Michael Chritton when he went there to study with her uncle, Grandmaster Chen Zhenglei, and they eventually got married and moved to Overland Park, Kansas. Huixian is also the niece of Chen Xiaowang and Chen Xiaoxing.

This is a brief capsule video explaining who she is.