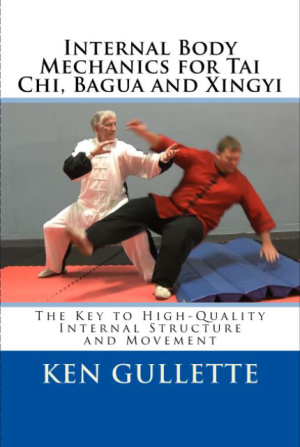 I believe this is the first time that someone has tried to organize and teach, step-by-step, the fundamental body mechanics that are required for high-quality Tai Chi, Bagua and Xingyi. I have seen at least one book titled "Body Mechanics," but it did not discuss body mechanics. After 31 years of studying these arts and 21 years of teaching them, I decided to write a book that is clear on this topic.

Body mechanics for Tai Chi, Bagua and Xingyi are much more than simple directions such as "turn your foot out 45 degrees and relax."

I have included 250 photos and clear, straightforward descriptions in this book. I am confident you will have several "Aha!" moments about internal body mechanics when you read it. If it does NOT teach you anything important, or give you insights that help you in your internal arts journey, send the book back to me and I will refund your money.

Basically, I wanted to write the book that I wish I had when I began studying the internal arts back in 1987. If I was able to read it back then, it would have saved me many years and thousands of dollars in class fees. Based on some of the martial artists I have met during the past 20-something years, I know there are millions of internal arts students who are not learning these skills.

The six fundamental body mechanics for internal power include:

** Establishing and maintaining the ground path at all times.

** Using peng jin at all times along with the ground path.

** Using whole-body movement -- when one parts move, all parts move.

** Silk-Reeling "Energy" -- the spiraling movement that adds power to techniques.

** Dan T'ien rotation -- guiding the internal strength and power as the body moves.

** Using the kua properly -- opening and closing the kua, like a buoy in the ocean, helping the body stay balanced as incoming force changes.

Each of these body mechanics represents a physical skill -- NOT metaphysical. You can "imagine chi" for the rest of your life and still not be able to develop real power in your Tai Chi, Bagua or Xingyi. It takes hard work and practice -- real study -- to move with internal power in these arts. When a teacher does not know the body mechanics, it is much easier to make students think that "cultivating chi" is the goal. It is not the goal.

The intent of Tai Chi, Bagua and Xingyi is self-defense. You can practice for health and meditation if you want, but unless you understand the body mechanics and the way the movements are used to defend yourself with relaxed power, you are not studying the complete art.

The book does not attempt to explain the history of the internal arts, much of which is lost in the mists of time and usually results in political squabbles among different factions within the arts, much like different denominations or sects will argue over religion.

I also do not use abstract wording that confuses more than it clarifies.

Instead, I try to get right to the point, as I do in my teaching, writing in a straightforward way that attempts to strip away the mystical mumbo jumbo. Along the way, I try to deliver a few good heel kicks to some pillars of mythology that stand in the way of many students.

I first heard about these body mechanics from Mike Sigman, through his online discussions and his videos. Through his online forum, I was guided to instructors Jim and Angela Criscimagna, living at the time in Rockford, Illinois, a couple of hours from my home. I became their student, and through them and another teacher I had later, the late Mark Wasson, I was able to learn from Grandmaster Chen Xiaowang, Grandmaster Chen Xiaoxing, Ren Guangyi and Chen Bing. I have also learned from Chen Ziqiang and Chen Huixian.

I began studying martial arts in 1973 at age 20, and I also practiced with the Iowa State University boxing team when I was 39 and 40 years old, when I was "adopted" by Coach Terry Dowd and the young boxers on the ISU team. I began studying the internal arts in 1987, and three years later, I won a gold medal performing the Yang 24 form in Tai Chi competition at the 1990 AAU Kung-Fu National Championships. I won more medals than any other competitor in the championships -- six medals in all, for Tai Chi, Xingyi, Bagua, and sparring. I thought I knew the internal arts, but years later, after learning the body mechanics I describe in this book, I realized that not only did I not understand internal body mechanics, neither did the judges. I was probably the best of a bad group of students who were doing external, muscular arts but calling them internal.

As I taught Tai Chi, Xingyi and Bagua beginning in 1997, as the Internet was becoming popular, I was reading Mike Sigman's online forum and realized there were holes in my knowledge. A few months later, I met Jim and Angela, and realized that what I had learned and practiced during the previous decade was empty. Over time, I identified the six key body mechanics that are basic to good internal Chinese gongfu. This book offers information on these skills that your teacher may not have taught you.

A few years ago, Kiefen Synnott wrote to me and said, "I live in Japan and study Baguazhang and Xingyiquan, but the language barrier makes me miss some of the meaning. Your training has filled in the gaps and has been responsible for most of the progress I have made so far."

Another martial artist who lives in Shanghai wrote to me that he was "amazed at how few instructors here know the body mechanics."

The book is sold in the U.S., the UK and Europe through Amazon. It is available for Prime shipping. If you are in the UK or Europe, please go to Amazon and search for "Internal Body Mechanics." In Australia or other parts of the world, you may be able to order it through bookstores.

If you are in the U.S. you can order the book directly from me on this blog.

There is Free Shipping within the U.S. (Sorry, due to high shipping fees, Ken cannot mail the book internationally). BONUS -- If you buy this book plus a DVD from this site, you may select another DVD free of charge as a bonus (just email Ken with your selection for the bonus DVD).

Order the Book Now with Free Shipping - U.S. Customers Only