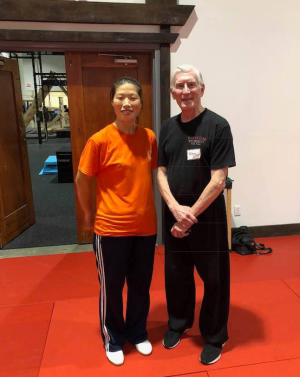 If you have been reading this blog since I began writing it in 2006, you know that I do not put teachers on pedestals.

I look at martial arts masters as people, not gods. I do not worship them. I do not want them to be a parental figure. All I want to do is learn from them and support their efforts.

And so I hope it means something to you when I tell you there is a jewel of Taijiquan that is shining here in the United States and, in my opinion, the best Taiji instructor that I have met. For most of the people who have studied Chen Taiji in America, it is an undiscovered jewel.

This past weekend, I attended another workshop by Chen Huixian, who lives and teaches with her husband Michael Chritton in Overland Park, Kansas, which is part of the greater Kansas City area. Michael met her when he was training in the Chen Village under Grandmaster Chen Zhenglei. They eventually married and she moved with Michael back to Overland Park.

How lucky that was for Michael. And how lucky it was for us.

Michael was the very first guest on my podcast, and he told of how their relationship developed. It is a great story. Here is a link to the podcast.

Huixian grew up in the Chen Village and is the niece of Chen Zhenglei, Chen Xiaowang and Chen Xiaoxing.

So we have a member of the Chen family living and teaching in the United States. And she speaks English.

This means we do not have to go all the way to China, or wait for the men to visit here to get high-quality Chen taiji training. All we have to do is either go to Overland Park or sponsor Huixian for a workshop.

I have trained with Chen Xiaowang, Chen Xiaoxing, Ren Guangyi, Chen Ziqiang and Chen Bing. Each of these teachers are outstanding, and I have enjoyed my experiences with them. But here is a little secret. Don't tell anyone, but I would rather learn from Chen Huixian than any of them.

She does not need an interpreter to explain the details, the concepts, the mechanics, the applications and the philosophy behind the movements of Taiji. She is genuinely interested in the people she meets, she is funny, and a very generous teacher, willing to answer any question. 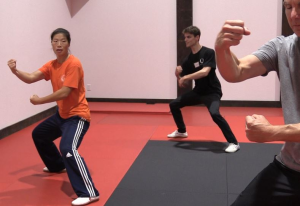 Patrick Rogne, of Ancient Root Taijiquan in Madison, Wisconsin, sponsored last weekend's workshop with Chen Huixian. It was held at Orthdx Natural Fitness. I attended one of her workshops in Madison five years ago, then again last year.

When I first attended her workshop in 2013, Huixian and Michael gave me corrections that no one else had given me, including advice on maintaining peng jin that I felt took me a step forward instantly.

She also gave me an insight into the use of the kua that illuminated this important part of internal body mechanics.

This past weekend, we did three hours on Friday night, focusing on the final few movements in Laojia Yilu that we rushed through at the end of last year's workshop.

We started with Punch the Crotch, which involves folding the arms, kicking the palm, turning and punching downward.

Huixian gave more detail in these movements than I ever received from Xiaowang or Xaoxing, and she gave it in English. As she demonstrated, coached, explained and corrected in detail, the quality of her teaching slapped me like the flat edge of a kuandao.

I am 65 now, and with one lung and a heart issue, my legs were screaming for mercy when I got to my hotel room Friday night. I was so exhausted, I wondered if I would be able to last the weekend. Eating bitter with a member of the Chen family reveals how easy we take it on ourselves in our own practice, and after only three intense hours, I was feeling it. 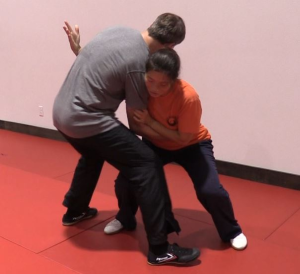 On Saturday and then Sunday morning, we spent a total of nine hours on Laojia Erlu, also known as "Cannon Fist." It has been one of my favorite forms for a dozen years, but this time, I was looking at it through Huixian's perspective, which is closer to the way Chen Zhenglei does it than the way Chen Xiaowang does it.

I had to rewire my brain and do a few movements differently than I had been accustomed to doing them for so long, but at the same time, I caught nuances in the body mechanics, the turning, the movement of the hands and feet that will add depth to my form, explained in detail.

Five years ago, when I first met Huixian and Michael, she was coaching us through a movement in Laojia Yilu and I was concentrating. When I do that, I sometimes look a bit downward as I ponder the body mechanics of a movement.

As I looked downward, from across the floor Huixian shouted, "Ken! The answer you seek is not on the ground." 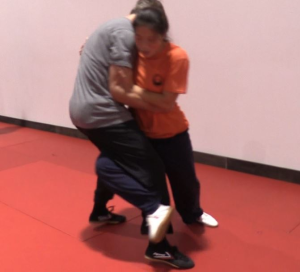 Unbalancing the opponent and using a leg hook - Part 2.

I cracked up, and for the past five years, I have been repeating that to myself when I catch my head tilting forward or looking down. And she taught me that lesson with humor.

In fact, laughter is common in her classes. She is dead serious about the art, but she sometimes jokes, and of course, I have always enjoyed laughter in everything I do, so I tend to crack an occasional joke to lighten the atmosphere.

Michael said on the podcast that when he first saw her practicing in the Chen Village, it seemed that anytime he heard laughter, she was in the middle of it.

On Saturday, late in the day, when our legs were burning and aching, she asked the class, "Are your legs hurting anywhere?"

"Everywhere," I said loudly, and she almost doubled over laughing along with the class.

It is a lot easier to eat bitter when you can cleanse the palate with humor.

Watching her do movements from Cannon Fist is a treat. Her grace, her relaxed strength, and her explosions of fajin won the admiration of everyone in the workshop.

On Saturday evening, there was a group dinner at the Nani Restaurant in Madison. Huixian talked about a wide range of subjects, including her children and life in the Chen Village. She asked about my children, and she figured out that she is three months younger than my youngest daughter. That was a profound shock to me. 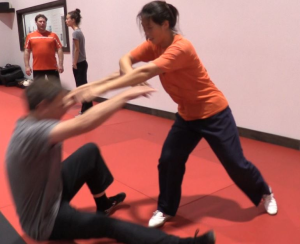 I was in good shape and energized until I landed back in my room. I sat down and posted some pictures on Facebook, then stood up. My thigh muscles clenched. "Oh, hell no," they screamed at me.

We finished Cannon Fist on Sunday morning, with a lot of fajin in the fist and elbow strikes. On Sunday afternoon, we spent the final hours of the workshop on push hands. Near the end, we got into some applications and Huixian started throwing some of the guys who were almost twice her size, showing them how a bump can unbalance your opponent, then you can step in and uproot him, then turn and throw him.

When a man is thrown by a woman, it is interesting to watch their faces when they hit the ground and begin standing up. With each one, you could see the respect and realization in their faces, each one not only impressed with the way she threw them, but you could also see the light bulbs going off after they were able to feel the way she did it.

I hated to say goodbye on Sunday afternoon.

I have studied with several teachers over the past 45 years. I do not believe I have met a better teacher than Chen Huixian.

An open-minded Wu stylist who attended this workshop from Detroit told me, "I have never seen this level of personal corrections in any workshop. She is excellent."

Before I attended my first workshop with her in 2013, my main taiji teachers and the Chen masters I had learned from had been men, and it was only natural, given our society and the culture I grew up in, that I wondered how good a woman would be, and since I adhered a bit to the Chen Xiaowang/Xiaoxing way of doing things, would it matter that her "side" of the Chen family added different flourishes to the movements? Each of the "Four Tigers" of the Chen Village (Chen Xiaowang, Chen Zhenglei, Wang Xian, and Zhu Tiancai) add their own artistic touches to the forms.

Any reservations I had vanished quickly five years ago. The quality of her taiji and the concepts, principles and mechanics she teaches transcends style and teacher. She won my immediate respect and it has only grown since.

I still feel the same as I always have about putting teachers on pedestals, but Chen Huixian deserves every bit of respect and recognition that the men in the 20th generation of the Chen family receive, and regardless of who you "follow" in taiji, if you live in the U.S. you have a Chen family member here of tremendous value, willing and able to share -- and more importantly TEACH -- her family's art with skill, power, and an unpretentious, fun personality that makes every moment a pleasure.