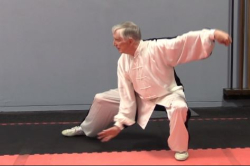 My membership website, InternalFightingArts.com, will turn 10 years old on July 4, 2018, just under six weeks from now. When I launched it in 2008, it had around 200 video lessons on Chen Taiji, Xingyi, Bagua and Qigong, plus some downloadable pdf files.

It now has around 830 videos offering a step-by-step approach to learning all three internal arts.

Now it also has something different -- Yang style instruction for those who want a slower, gentler version of Tai Chi.

Yes, I know. I love the self-defense aspects of Taiji -- how each movement, how each placement of the hands and body represents a powerful self-defense technique and a principle of internal body mechanics.

But over the years, it has occurred to me that a lot of people do not know what they are missing when they just study Yang style, so I have decided, after years of resisting it, to include Yang style instruction on my site. I believe it will offer them something they want, and then expose them to more high-quality instruction on a wider range of internal principles than they are accustomed to seeing.

I resisted this for years, because of my love for Chen style Taiji, but when I polled some members, they were almost all enthusiastic to see Yang style instruction from my perspective -- especially with the body mechanics and applications -- because many of them started, as I did, with Yang style.

Yang style was the first Tai Chi style I learned, beginning in 1987, and I began teaching it in 1997.

In 1990, I won a gold medal with the Yang 24 in Tai Chi Competition at the AAU Kung-Fu National Championships, held in Omaha that year.

I gave up Yang style around 2000, after taking up Chen style in 1998, and finding it much more "alive" and powerful. Chen Taiji is still my foundational art. 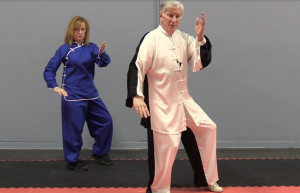 In the past few weeks, I have dusted off the Yang 24 and I am recording the form plus instruction on individual movements. My wife Nancy Gullette is usually my videographer, but she has stepped out from behind the camera to learn the form as I teach it and correct her. And trust me, an opportunity to humiliate and correct and tease your wife on camera is something no man should pass up!!

I am still recording and editing lessons, but my goal is to very soon have the complete forms of the Yang 24, the Yang 48, and the Yang Straight Sword form on the website, plus detailed instruction on each movement, including the body mechanics, and fighting applications for each movement.

After working on the Yang 24 again for the past few weeks, I understand why it is the most popular Tai Chi form in the world. It was created in 1956 by the China Sports Commission, with guidance from four Yang style masters. It is an easy, graceful form, perfect for an older student who is not especially looking to study a martial art.

On my website, those who study the form for health, fitness and meditation will also have the option of learning what the movements mean in self-defense.

In the meantime, I am also doing new videos for the website drilling into other internal principles and techniques. One of them is a video on where to generate the ground path in the feet -- what point in the foot do you focus on when grounding? And I am writing a book on Internal Body Mechanics in time to publish for the 10th Anniversary of the website.

Join me on the site for two free weeks. It is the most honest site on the Internet. You can cancel anytime, and you can even get personal coaching from me.