Zhan Zhuang and My 96-Year Old Buddy: An Idea for Your Elderly Friends and Family 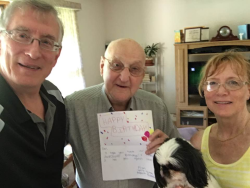 Me, Earl, Minnie and Nancy when we delivered a 95th birthday card to Earl in 2016.

My neighbor Earl is one of my best friends. He is also 96 years old. A couple of weeks ago, I realized that he could benefit from the practice of Zhan Zhuang -- "Standing Stake" or "Standing Pole."

If you do Zhan Zhuang as part of your practice (I call it "Standing Stake"), you can teach it to elderly people in your life.

We moved into our current home almost four years ago and Earl, who was 92 at the time, walked across the street to introduce himself to us. His mind was sharp and he had a great sense of humor. His wife had died two years before. He fought in the Philippines during World War II, came home with PTSD, but got help and lived a happy and successful life. His three sons all live within a mile.

During the first year we lived here, I was friendly with Earl and would sometimes cross the street when he was outside to talk to him.

But during the last three years, Earl and I have developed a close friendship. My home office looks out toward his house. We sit out during warm weather and my dog Minnie and I visit all the time. When I have health setbacks, he calls to see if I'm okay, and I keep my eye out for him. We have each others backs.

Earl and I go out for lunch sometimes, and he always tells me how glad he is that I am his neighbor. I told him recently that he has become one of my best friends in the Quad Cities. He replied, "We have a good thing going."

I've never had a "bromance" before, but I think I have one now.

My home office looks out at Earl's house across the street. He says sometimes, he looks over at our house and wonders what I'm doing. I told him I do the same. Instead of looking at him as the old man across the street, I connected with him, and discovered a friendship that has added tremendously to my life.

During the past year, I've seen Earl get weaker, and I have been worried. He fell a couple of times, really banged himself up, and now he walks with a cane, and sometimes uses a walker in his house. This is a man who was using a push mower on his yard a year ago.

So a couple of weeks ago, I taught him how to do "Standing Stake." It's an important tai chi exercise that is used for meditation, but also for strength-building, especially in the legs. When you first do it, you can feel wobbly after just a minute or two. The idea is to add a little time each day. 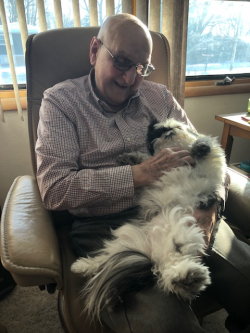 Yesterday, Minnie and I visited Earl and he said he had been doing Standing Stake every day. He stands next to the walker and does it while watching TV. He has worked up to 15 minutes, and he says he feels stronger and is now walking around the house without his cane. He thanked me for showing it to him.

During the past nine years, I have been in the hospital a few times. The hospital drains the strength out of your body. When I was able, I got out of the bed and did Zhan Zhuang in the room to help build leg strength. It really works, and it even works for people who are unable to do strenuous cardio exercise.

If you know someone who is aging and getting weaker in the legs, through age or illness I believe Zhan Zhuang can help keep their legs strong.

Who knows, next I might teach him some Silk-Reeling exercises. Most of those are the same as taiji without the space requirements.