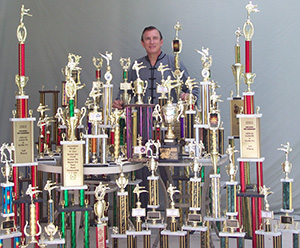 On April 7, 2008, a vice president at the university where I worked as the director of media relations walked into my office with a Human Resources manager and closed the door.

Oh, crap, this is not good, I thought.

So I had an idea that this would happen, but it is still a shock when you lose a good job, even a very political and public job where you are placed in front of news cameras to hold news conferences on sensitive university issues, then you walk away from the news conference and realize there are arrows in your back, fired from within the university. It was a very interesting, intense job. I loved it, but I was, as the VP said, "set up" for a fall.

After the VP and the HR person left my office, I quickly cleared out my stuff and within a couple of hours, I was sitting at home wondering how I was going to replace a six-figure paycheck.

My feet had been on firm financial ground for years, and suddenly, the floor had collapsed like the trap door on a stage.

A couple of days later, I was talking to my nephew Brian, who was launching a website to teach language skills online. Previously, I had tried to launch a website called the Media Relations Coach to teach media relations, but it had not been embraced by the public.

In talking with Brian, three days after I lost my job, the idea came to me -- I would do what I loved the most, the internal arts, and I would create a website to teach what I had learned, step-by-step in plain English, without the mystical mumbo jumbo that so many instructors teach.

My wife, Nancy thought privately that it was a crazy idea, but she supported me. 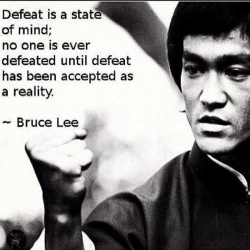 The plan was that I would do it all myself -- content creation, photos, Photoshop, shooting video, editing, creating the membership website, marketing it, posting the content to the site and working with payment processors so members could pay monthly.

I had my goal, and I developed my plan.

I got to work, and less than three months later, on July 4, 2008, www.InternalFightingArts.com was opened. It is still going strong. I work on it every day, creating content, videos, marketing it -- and the content I create for the site also helps me create new DVDs, which I sell on my websites and on Amazon.

Setting Goals is Only Step One

I was talking with a couple of students this week about the new year that is fast approaching.

Both students are within striking distance of some major goals. One is one test away from his brown sash; the other will test for his black sash.

Progress has stalled for both, and as the teacher, I am faced with the challenge of motivating them in a positive way.

We all go through stagnant periods -- plateaus -- where it seems like our progress has stalled. Many things compete with us day-to-day to knock us off our martial arts path, from jobs to relationships to children and more.

I completely understand. The week before I lost my university job, I was diagnosed with atrial fibrillation. After three procedures to fix it, the pulmonary veins from my left lung to my heart shut down.

For a few years, the challenges I face each day after losing the lung, going through heart failure, and struggling to regain some muscle mass that I lost in 2009 all conspired to stunt my progress. I made progress here and there, punctuated by periods when I was simply trying to survive.

A few months ago, I suddenly felt as if I had broken through to another level, as I gained insight through practice of the use of taiji "energies" in close-up fighting. It has boosted me again.

In other words, I am very familiar with hitting plateaus. It happens to all of us.

There is one surefire way to make progress on any goal in martial arts or in life. The coming of a new year is always a good time to look ahead and plan.

Let's not use the word "resolution." We all know what happens to resolutions by February first, don't we?

If you have a goal, you must visualize yourself successfully achieving that goal.

For example, you are going for a brown sash. You know the curriculum you are working on.

Here are steps that will help you achieve this goal:

Step 1 -- Visualize how good it will feel to wrap that brown sash on your waist and hang the certificate on your wall.

Step 2 -- Look at the calendar and set the date when you will achieve your goal. Since I am writing this on December 20, let's say March 1 is the day I will earn my brown sash. I write this on the calendar.

Step 5 -- On March 1, take the test. On the afternoon of March 1, visualize wrapping that brown sash onto your waist.

There is a simple truth to achieving any goal in life, in business, in anything.

Here is the truth:

You will achieve the goal that you believe you can achieve if you set the goal and establish a clear plan of steps you must take, and then work hard to complete the plan, step-by-step.

If you set success as your goal, you will achieve it.

If you set failure as your goal, you will also achieve it.

In my life, I have seen this truth play out time after time, and as I have gotten older, I have gotten better at it. This truth becomes evident if you shoot for any goal, whether it is a better career or a tournament victory.

If you cannot believe in your own ability to set a goal, work a plan and achieve success, your self-expectation becomes your reality.

In my latest Internal Fighting Arts podcast, one of the most successful martial arts instructors in the world, Keith R. Kernspecht, said that when he decides he wants to do something or learn something, no one can stop him. Listen to the podcast by following this link.

There is a reason some people achieve their goals and some people fail. Which path will you take in the coming year?

It is your decision.

The best book ever written on this valuable concept is called Think and Grow Rich, by Napoleon Hill. It is available at a low price on Amazon, and a free Kindle ebook is available. I highly recommend it.