A Real-Life Use for Qigong -- Getting a Cardiac Stress Test 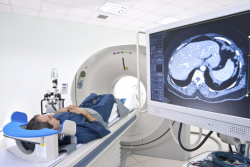 The cardiac stress test machine was similar to this.

I went in to the hospital yesterday for a cardiac stress test. After a freak side-effect from a medical procedure nine years ago this month, my left pulmonary veins shut down, meaning my left lung is virtually useless. Doctors at Cleveland Clinic tried to stent one of the pulmonary veins, tore the vein and accidentally pierced my heart with the wire.

That set off complications that I have survived, barely it sometimes seems. But my chi is strong, right? Still, I sometimes have to get tests to make sure nothing is getting clogged up.

Cardiac stress tests have changed. They used to hook you up to electrodes and put you on a treadmill.

It's All in Vein

Now, they stick an IV in your arm, hook you up to electrodes and slide you into a tube, as if you're getting an MRI or something.

They pump radioactive crap into your vein and then take pictures. The new pictures are supposed to be a lot better than even the ones they took during my last cardiac stress test three or four years ago.

"Are you claustrophobic?" the nurse asked before sliding me into the tube.

But as they slid me in (my head remained partially out of the tube), they told me I would need to lie very still for about 30 minutes.

How to do Qigong During a Test

I closed my eyes, relaxed, and began doing qigong.

Using reverse breathing, I put part of my mind on my Dan T'ien and focused on my breathing.

With each inhalation, I imagined air and energy coming into my body and collecting at the Dan T'ien.

Each time I exhaled, I felt my Dan T'ien growing warm.

It only seemed like a couple of minutes when the first set of pictures had been taken, but almost 10 minutes had passed.

I did the same thing during the second set of pictures. Relax, remain aware of everything around me, and put part of my mind on my breathing, Dan T'ien, and feeling of warmth.

Second set seemed like only a couple of minutes, too.

Shoot the Juice to Me, Bruce

Then the third set, when they pumped in the drug that made me feel as if I was exercising hard. I began breathing hard to keep up, but relaxed and just went with it. In my mind, I visualized doing Laojia Erlu.

Within a couple of minutes, the heavy breathing eased and before long, the test was over.

Qigong can help you in many ways.

If you are suddenly faced with a tense moment or a crisis, an unreasonable boss or an upset spouse, or someone cutting you off on the highway, you can relax, put part of your mind on your Dan T'ien and your breathing, and keep part of your mind focused on the problem at hand.

I have found that this has helped me in many real-life situations that would normally result in stress and tension -- even when you get poked and shoved into a tube and pumped with radioactive chemicals.

So remember to do qigong during these moments, and shine on, with or without radioactivity. :)

Check out Ken's Qigong DVD -- 90 minutes of exercises to help you remain centered and manage stress.