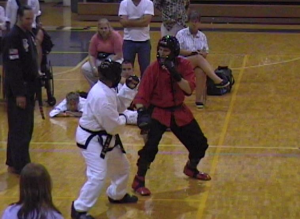 Ken Gullette in red, sparring and connecting in Keokuk, 2000.

A little old man kicked my butt at a tournament in Keokuk, Iowa in 2000, and it is one of my favorite memories from my years competing in martial arts tournaments.

It was a hot, August day in a gymnasium that was not air-conditioned. I had been out-pointed by a black belt from Georgia in a match for first place, so I was next paired with a nice old guy to fight for the third place trophy.

My opponent was short, feeble, very slow, left himself open, had slow reaction time, and could hardly get a kick above his own waist. He wore hearing aids in both ears.

I had seen him perform at the tournament at least two other times, but he never went home with a trophy. He didn't even come close. It was a fluke that we were put in the ring to fight for some hardware.

The center ref told us to bow to each other, then bow to him. He signaled us to begin.

In that moment, I felt a connection to my aging opponent. In other tournaments, I had encouraged him to stay with it, even though he competed and never won anything. It was great just to see him there, still plugging away despite not having the tools to succeed.

But now, for the first time, I was in a position where I had to dispatch him, and I had a surprising reaction to it. Or, considering my personal philosophy, not so surprising.

What would his children think; how proud would they be if at his age, and with his limitations, he brought home a martial arts trophy for sparring?

And how much would another trophy mean to me if I won under these circumstances?

We touched gloves and the match began, and I approached him. He threw a kick, then a punch.

I could imagine his children bragging to his grandchildren, showing them the trophy he won late in life.

I didn't want to make it obvious. He needed to do some blocking, so I blocked some of his punches and threw a few that he blocked. Then I left my stomach open just a bit for a kick to land.

The match resumed and I threw a kick for him to block. He threw a couple more kicks and one landed.

At this point, I knew my students, who were in the stands recording the match, would be wondering what the heck was going on. And on the video, you can hear one of them give an "Awwwww," in frustration as my opponent got his second kick in.

We touch gloves and the match resumed. I needed to act a bit more desperate, so I came in with a little more energy, bouncing, threw a few quick punches that were easily blocked, and I kept my head out front and open.

He landed a ridgehand for his fifth point.

The judges called it and had us bow to each other. My opponent and I slapped each other on the shoulder.

"Why?" my puzzled student asks on the video.

He found out why a few minutes later when I explained.

As I walked out of the ring, an Asian judge approached with tears in his eyes.

He slapped me on the back and said, "That was one of the most generous things I have ever seen."

I just nodded at him and said, "Thanks."

Later, a couple of other black belts came up and commented on the match, thanking me for displaying such sportsmanship.

But the best thing that happened was one week later, when I went to a large regional tournament in Dubuque, Iowa. One of the more prominent black belts, Ken Dunkle of Dyersville, was standing across the large high school gymnasium when I walked in carrying my gear and my weapons.

I watched as Mr. Dunkle walked across the gym, directly at me, like a man on a mission. When he reached me, he stuck out his hand.

"I heard what you did last week in Keokuk," he said, warmly shaking my hand. "I just want to tell you that I think it was great."

I don't remember exactly how I replied. I was probably surprised and just said thanks, it was nothing, glad to do it.

Attitudes seemed to change towards me at the tournament that day. I could feel a greater sense of respect from my black belt peers.

I always tried to have fun in martial arts tournaments. When my opponent landed a good punch or kick, I congratulated them right there in the ring. I didn't try to brush it off or act as if it didn't happen, as some competitors do to try and fool the judges. And I did not get angry. I never got angry.

No, I felt that if someone scored on me, they were pretty good, and I appreciated their skill.

Sometimes, I would joke in the ring. At least once, a younger, faster opponent would score, and I would take out my mouthpiece and loudly say, "He's young and fast. I HATE that." And the judges would all laugh.

It is a lot more fun for everyone, whether it is at a tournament or in the workplace or at home, to enjoy yourself, help everyone else enjoy themselves, and not take yourself too seriously. Good things happen when you get out of your head and connect with others.

Do you live your philosophy or is it all about you?

I have won a lot of trophies in a lot of tournaments -- in forms, weapons and sparring. But I think my warmest memory comes from the day in August, 2000 when I got my butt kicked by an old man in Keokuk, Iowa. That was the day I saw a judge with tears of gratitude in his eyes, and I saw an old man take home a shiny trophy to show his grandchildren.

I think I won that day, too.