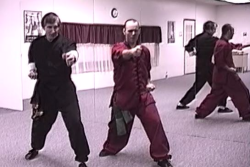 Practicing with Rich Coulter in 1997.

Twenty years ago last night, I taught my first martial arts classes. It was about one month after I earned my black sash.

For some reason, I did not want to compete with my friend John Morrow, who has a kung-fu school in Moline, Illinois, so I chose a fitness center in Muscatine, Iowa, rented a room, and advertised classes would start on October 1, 1997 -- one class for children and one for adults.

When the adult class started, and these teenagers and 20-something guys were looking at me as if thinking, "Okay, are you any good?" I began to feel the pressure of the black sash. 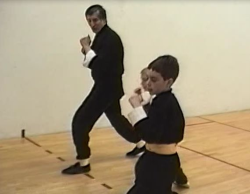 Teaching was a slap in the face by the cold hand of reality! Being a student is one thing, but being a teacher put me in a new category.

I responded by living, eating, breathing, and sleeping kung-fu. My practice time jumped. It was not unusual, especially on the weekend when I was not working, to practice and workout for six hours a day. Two nights a week I was teaching and the other nights, practicing and studying.

Within a few months, as I studied and researched the Hsing-I, Yang Tai Chi and Bagua I was teaching, I discovered there were holes in my curriculum and my training. I heard internal terms that I had not been taught. This led me to Jim and Angela Criscimagna, who introduced me to Chen Tai Chi, and that changed the course of my training.

I was lucky. Among my first students were Rich Coulter and Chad Steinke. They walked in with the look of skepticism in their eyes. They had both studied other arts, but they liked what they saw in my class and came back. In the coming two or three years, we tore up the tournament circuit and had a great time together. Rich became my first black sash student and both are still good friends.

The Kids' Class only lasted about 18 months. I love kids, but I felt it was holding me back in my own development. One evening, when one of my 11-year old students began crying when I was coaching him on a movement, I asked what was wrong.

"You're always criticizing me!" he bawled.

I was stunned, and tried to explain that I was simply trying to help him do the movement better.

At that point, I realized that teaching children was not what I wanted to do. Some people are great at it, and some do it because it's the only way their schools are profitable, but I decided I would rather not make a profit if I had to endure that, so when I moved my "school" to the Quad Cities in January, 1999, I left the kids for good.

Tonight, at the Bettendorf Community Center in Bettendorf, Iowa, I am launching a free 6-week tai chi class for anyone aged 40 and over. I have been flooded with calls since the Quad-City Times ran a short article about it yesterday. 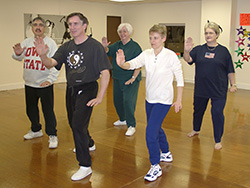 Most of the people who are attending have never studied qigong or tai chi before. It's going to be a lot of fun. A few of my older students from 15 years ago will be there. They are now in their 70s.

One 78-year old woman called yesterday to tell me she would be there tonight. She thanked me for my gift to the community and she said I am a "gift to the universe." How sweet was that? I can't wait to meet her.

A gift to the universe. At my age, I feel like I have been re-gifted.

During the past 8 years, since I lost my left lung and have occasionally been forced to spend time in the ICU and the ER, my health has not been dependable enough to hold a regular class like this. But with my 20-year teaching anniversary, I thought it was time to try again.

If it works and people like it, I might try again after the first of the year. But if I don't, the people I bring into the art may seek out other instructors in the area. I am the only one holding classes in Chen Tai Chi, however, but when you are beginning and in your 50s and up, you are not really looking to eat bitter, you are looking for health, fitness, and fun, and that's what this class will be.