Home Archives Profile Subscribe
Are You Getting This Important Benefit from Your Qigong Practice?
A New Spiffy Platform for the Internal Fighting Arts Website 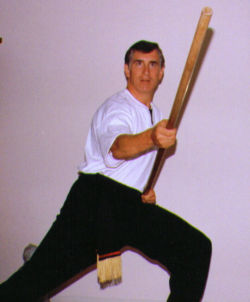 Ken Gullette at age 44, shortly after earning a black sash in 1997.

20 years ago this summer, I got canned from my last job in TV news.

It wasn't a total shock. In fact, it was a relief. Despite award-winning work, I was the manager of a newsroom, and it was a fate worse than death.

Anchors acting like prima donnas, reporters angry because they wanted to be anchors, videographers dinging news cars, inexperienced kids on the air and me having to answer for their screw-ups.

I got into news to be a writer, reporter, and to be creative. I found myself in a living hell as the top decision-maker in the newsroom.

Suddenly, I was canned. It happens in the news business. The life expectancy of a news director is 18 months. I had been there three-and-a-half years.

Two days after losing my job, I had an idea. I was 44 years old and I had been one test away from black sash since 1991, but I had moved away from Omaha, where my teacher was, I was working more than full-time, I was a single (divorced) father with two teenage daughters living at home, and was also trying to have some type of social life, so there was no time to pursue the black sash.

Making it more difficult, my teacher had sold his school in Omaha and was in seclusion.

So I got canned from the TV job, just 10 months after I was re-married. One daughter had moved out and the other was living with her mom in Cincinnati.

Within a couple of days of being fired, I called the instructor who bought my teacher's school -- one of his senior students -- and asked if he would test me. He agreed.

Every day for one month, I trained for a several hours. I had no partner to work on chin-na or one-steps or sparring, so I fought mental opponents. I stood in the basement and imagined my partner throwing attacks and I would respond.

Xingyi, Taiji, Bagua, Qigong, chin-na, shuai-jiao, weapons forms, sparring empty-handed and with weapons -- it was a deep curriculum. The test was intense.

In late August, 1997, I drove to Omaha, took the test, and did well. I was now allowed to wear a black sash. And brother, I was ready!

On October 1st, I began teaching at a fitness center in Muscatine, Iowa, and at that time, as I faced my first students, young guys who all expected me to be perfect, I began feeling that there were deep holes in my curriculum and my knowledge.

The Internet was beginning to take off. I was reading the Neijia List every day, an online discussion by Chen taiji guys, including Mike Sigman. All the guys on the site seemed to look up to Mike, and they were using terms and descriptions of skills that I had never seen or experienced. I had never heard of the ground path. I only knew "peng" as the "ward off" posture in Yang style tai chi, which I learned as part of my curriculum.

Holy cow! I had a black sash and it meant I had to begin studying!

I was still proud of the black sash. Many people begin martial arts training, but in a school as difficult as the one I trained in, few earned their black sash. But I knew there were a lot of internal principles and mechanics missing.

The next spring, I set out to make a mark in tournaments in the black belt division, but I still continued to research and seek out what was missing in my internal mechanics and material. Within a few months, after being directed by the guys on the Neijia List to Jim and Angela Criscimagna in Rockford, Illinois -- a couple of hours from my house -- I switched to Chen taiji, which gradually became the foundation of everything I did.

I left the system that I earned the black sash in -- it was a little too much into the woo-woo for me, and the more I studied Chen taiji, the less internal I realized my previous art was -- but I still practice and teach the most solid pieces of the martial material, infused with and improved by better internal principles. 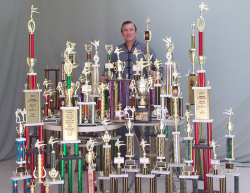 Ken Gullette and his trophies in 2008. Most of them were won after age 44. He threw them away after taking this photo.

I did very well in tournaments. I did a lot of Xingyi, but as the years passed, I did more Taiji. My goal was to publicize the internal arts, and show martial artists from all styles that these were martial arts. At that time, karate, TKD, Kuk Sool Won and other "external" artists thought the "internal" arts were for old people, and for people interested in moving meditation. My students and I showed them something that changed their attitudes.

One of my first students, Rich Coulter, walked into one large tournament when he was a brown sash. A student from another school said, "Great. Rich Coulter is here. The most I can hope to win is second place."

And meanwhile, every day, I was working to improve and learn better internal mechanics for my arts. I taught in a school setting until 2007, when I moved to Tampa for a new job.

In 2009, I lost the function of my left lung, a freak side effect of a medical procedure. I went through a couple of years of heart failure. My cardiologist said, "You could drop dead at any moment with no warning."

That really plays a number on your mind, but it didn't stop me from practicing.

My heart situation improved. Breathing is still an issue, but I have been teaching anyway, through challenging circumstances, and still trying to get better. I now teach in parks and in rented rooms at community centers. I moved my "school" online and have made more than 800 video lessons, passing along everything I learn as my skills develop.

When I was in TV news and became a manager, I would work with my reporters, producers and anchors and try to cut years off their learning and development time by giving them straight information and coaching on delivery, writing, and a more creative approach to their stories.

As an internal arts teacher, my goal is the same. I teach what I have learned and hold nothing back, hoping to save people a few years of getting information bit-by-bit, or not at all, sometimes from teachers who did not have good training but never realized, as I did, that you never stop seeking out new, better, and more advanced information to push your own skills forward.

I never went back into the news industry. I worked in media relations at ACT (the college test), then at the University of South Florida and a couple of nonprofits. In 2013, I began doing the internal arts full-time and handling my own marketing, media relations, video editing and customer service. It is a labor of love and a completely creative job.

And always, I am seeking training and information, practicing the studying, working through forms and movement and fighting applications carefully, like studying a college course, always trying to look beneath the surface.

I was so proud when I earned a black sash 20 years ago, but it was just the beginning. Even 20 years later, and almost 44 years in martial arts (next month), I still feel like a beginner. It is a lifelong endeavor. There is so much to learn.

Check out my membership site and enjoy more than 800 video lessons in Chen Taiji, Xingyi, Bagua, Qigong and more -- right now -- with two weeks free and no risk. Follow this link to www.internalfightingarts.com.

Take your understanding deeper with Taiji, Xingyi, and Bagua DVDs that teach principles, internal mechanics and fighting applications at www.internalfightingart.com.