Writing It Down: How to Get the Most Out of Your Teacher's Corrections 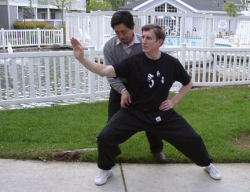 Chen Xiaoxing correcting me in 2005 in Livermore, California.

In 2005, I had the opportunity to spend a couple of private days with Grandmaster Chen Xiaoxing. My teacher at the time, the late Mark Wasson, invited me to his home in Livermore, California, for an exclusive opportunity to hang out with him shortly after Xiaoxing arrived in the country for a tour of workshops.

We spent most of the time going through Laojia Yilu, movement by movement. Grandmaster Chen and Mark would watch as I did a movement, then Xaoxing would make comments and gestures, and often hands-on corrections. Mark would listen and watch his comments intently, then interpret with additional instruction.

I was grateful to have such a valuable opportunity.

When I left Mark's home to drive back to San Francisco to the airport, I was a few hours early, so I stopped at a park, went to a table, and started furiously writing notes. I continued on the airplane flying back to the Quad Cities. Starting with the Opening movement, I went step-by-step through the form and wrote down every correction and piece of coaching I could remember. My mind had retained a lot of it, and it flowed out of my pen and into the pages of my notebook.

Those notes were crucial. I referred to them, thought about them, and I worked hard to incorporate them into my movement. I still refer to them sometimes, to see if I have let anything slide over the years. 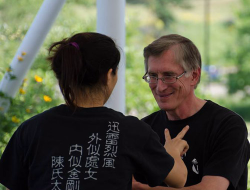 I can't help but smile as Chen Huixian gives me a subtle bit of coaching in 2013.

This weekend, I plan to attend a workshop held by Chen Huixian in Madison, Wisconsin. On Friday night, she will teach push hands. On Saturday and Sunday, we will go through at least half of Laojia Yilu. I also attended one of her Laojia workshops in Madison four years ago.

I am looking forward to studying with her again. She is a very good teacher, and she speaks English well enough to not need an interpreter.

You can bet I will be writing down notes at the end of each day's practice.

Are you making notes after classes with your teacher? We don't always retain information over time. We spend a lot of money for instruction, and we spend a lot of time, sweat, and energy to "eat bitter" and to learn.

I urge you to get the most out of your training by taking notes and referring to those notes as you practice.

This week, I was coaching a student in one of the movements in the Chen 38 form. At the beginning of the movement, there is a slight closing of the left kua, a sinking, then a sitting back and turning. Even though I had corrected him on this movement before, I noticed he wasn't sinking or closing the kua before the turning, so I reminded him that we had gone over this, and I encouraged him to write down notes after practices.

Go to a workshop and some people will have notebooks or tablets with them. Each time there is a break, you can see them scurry over and scribble or type furiously, recording the tips they had received during the previous hour or two. I often take a notebook and do this during breaks. At other times, I will go back home or to my hotel room, if I am travelling, and I will write down as much as I can remember.

You can also do that after a regular practice with your teacher. We are no different than high school or college instructors. When a student pays attention, takes notes and focuses on what is being taught, it is what we live for -- to know they are hearing us, taking it to heart, and documenting it so they won't forget.