An Effective Tactic for Verbal Self-Defense: Flipping the Script 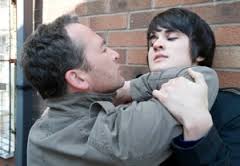 "Hey, what are you looking at?"

Every boy learns to recognize this question. It's one of the first things a bully will say when he chooses you for a target.

It doesn't matter how you answer.

"What? Are you saying I'm nothing?" the bully will reply.

And then he walks closer. He is ready to fight.

As adults, these types of encounters are not as common, but they do happen. Often, the bully is replaced by someone with more sinister motives -- someone who wants to do us harm.

Dan Djurdjevic is a martial artist from Perth, Australia who has developed the concept of "flipping the script" on someone who is verbally setting up an assault.

You can "flip the script" when you reply to a leading question with something that the potential attacker is not expecting.

For example, he might say, "What are you looking at?"

He is expecting you to be afraid and reply, "Nothing." Then he can continue with his script.

But what if you give him something he isn't expecting, for example, "Oh, I'm sorry, I wasn't paying attention, I just found out my wife has cancer."

He would be completely thrown off his script. He would not know how to react, and the threat might be over quickly.

Or, you could smile and reply, "Hey, how are you? I haven't seen you in a while."

He might stop in his tracks and wonder what the hell is going on. You could say, "Oh, sorry, you look like a good friend of mine that I haven't seen in years. You look just like him."

In the latest Internal Fighting Arts podcast, Dan Djurdjevic gives two or three great examples of how he flipped the script on a stranger who appeared at his door one night with a knife held behind his back, a robber who was looking to take his money at the train station, and he describes a funny story of how a friend disarmed a potential attacker by saying something that made no sense at all.

It's an interview that will give you some great ideas, but it's also great self-defense. If you can avoid a fight, that demonstrates that you have the ultimate self-defense skill.

Here is a link to the Dan Djurdjevic interview on Audello (listen online or download the podcast).

Here is a link to the podcast on iTunes.

Here is a link to the podcast on Stitcher.

Make sure you subscribe to the Internal Fighting Arts podcast and hear interviews with top internal martial artists around the world.