Chen Village Taiji, Beijing Taiji, and a Reunion with Jim and Angela Criscimagna 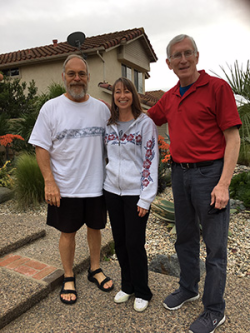 Jim and Angela Criscimagna with Ken at their home last week.

I had a great visit last week with my first (and best) Chen taiji instructors, Jim and Angela Criscimagna, at their home in Escondido, California. Nancy and I went to San Diego to attend the Social Media Marketing World conference, which I used as an excuse to see Jim and Angela and get some input on taiji.

I began studying with them in 1998 when they lived in Rockford, Illinois, and continued until around 2004, when I met and became a student of Mark Wasson. This is the second time I have seen Jim since 2004, and the first time I've seen Angela since then.

Jim and Angela have had several martial arts teachers over the years, including Zhang Xue Xin, who they studied with before training with Chen Xiaowang. I met Chen Xiaowang because they sponsored his workshops in Rockford.

Around 2005, Jim and Angela met Chen Yu while in China. The quality of his art and his body method caught their attention, and Jim began exploring the differences between the Beijing way and the Chen Village way.

When I studied with Jim and Angela, we were primarily doing taiji the way Chen Xiaowang was teaching it. Last week at his home, Jim coached me on some of the differences between the Chen Village way and the Beijing way.

I returned home on Sunday. Last night at practice, a student asked me what I had learned. I had to tell him that I really wasn't in the position of showing much because I am still processing the information. It will take some time and some dedicated practice, and some followup questions, before I will be able to translate it into movement. In general terms, it involves slight changes in stances, in the shifting and placement of weight to establish root, in the way the inside leads the outside, and other coaching that involved openings and closings and sinking. It is very difficult to explain. Jim and Ken practicing push hands in the early 2000s.

In recent years, the debate has risen about the differences between the Beijing way and the Chen Village way. Did Chen Fake take the highest quality of the art to Beijing when he relocated there from Chen Village, leaving the art in the Chen Village to decline in his absence? Did Chen Xiaowang's generation learn as much as they really needed to learn from Chen Zhaoxu, Chen Zhaopi and Chen Zhaokui? Since most of my training has been in the Chen Village way, this is an important question for me. And I have never been afraid to change my viewpoint when new information comes in; that is true in religion, politics and martial arts. I have changed beliefs, parties and styles based on new information. I have changed my beliefs about psychic phenomena and "alternative" medicine. When new information arises, you have to change and evolve if you are going to be intellectually honest.

From the explanations and coaching I received last week, I believe there are differences between the Chen Village and Beijing styles of Chen taiji that are worth exploring. Is one better than the other? That's an individual decision. 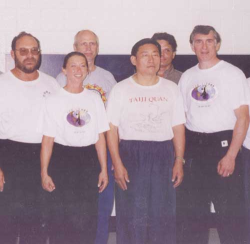 From left to right: Jim, Angela, Chen Xiaowang and Ken at a 2000 workshop in Rockford, Illinois.

These are complicated and political issues. Let's face it, those of us who did not grow up in the Chen Village or Beijing can learn from both camps. We can't touch any of them in the quality and power of their taiji. My philosophy is simple -- I can learn from anyone. About three years ago, I was at a workshop with Chen Huixian and her husband Michael, and they gave me some input that had a profound change in my movement. Huixian is the niece of Chen Zhenglei, of the Chen Village. So there is quality throughout.

Some people make this debate out to be a much more negative thing than it should be (more about that on my next podcast, which features an interview with Dan Djurdjevic), but the goal here for all of us should be knowledge. We should learn what we can from everyone who can teach us. From there, we develop our own taiji.

In the meantime, I deeply enjoyed our visit with Jim and Angela. The time went by way too fast, and I was bummed when Nancy and I left their home last Tuesday to drive back to San Diego. Good instructors are hard to find. I always appreciated Jim and Angela because they asked questions and looked under the hood. They were not content to just follow along with their instructors. And what they learned, they passed along to their students. That attitude of sharing and teaching continues, even though Jim has officially retired from teaching, and I was grateful for the opportunity to learn.

Jason,
Thanks! Perhaps I'll get someone to write a guest post, or write one in the future after I understand it a little more myself. :)

Mr. Gullette, this is my understanding of the difference that exists between what you refer to as Chen village and Beijing Chen Taijiquan. I hope it brings clarity to your muse.

When Chen Fake was invited by his nephew Chen Zhaopi, the father of Chen Zhenglei, to come to Beijing he possessed what is referred to as Old Frame (Chen village style). Chen Zhaopi and Chen Fake’s older son, Chen Zhaoxu, the father of Chen Xiaowang and Chen Xiaoxing, were also taught Old Frame. Both later in life had eventually retired to the Chen village to continue teaching their family style of pugilism. When Chen Fake moved to Beijing he made friends with a number of teachers in the martial community, one in particular was Hú Yàozhēn (胡耀貞, 1879-1973), a well-known Xingyi boxer and qigong expert. Their friendship enabled Chen Fake to enrich his understanding of the internal processes associated with qigong. At some point Chen Fake began to further develop the internal processes of taijiquan movement, incorporating concept of qi movement in his taijiquan, with greater emphasis on the core, or dāntián (丹田). Having established the orbital rotation of the dāntián he then saw how this greatly effected the twining actions of chánsī (纏絲) through the body. I see Hùnyuán Chén Tàijiquán (混元陳極拳) of Féng Zhìqiăng (馮志強, 1928-2012) as a continuation of this exploration, placing a great amount of emphasis on the orbital rotation of the dāntián during the performance of New Frame routines. Also, in reference to Feng Zhiqiang note that although he is renowned as a indoor student of Chen Fake he also studied Xingyiquan with Hu Yaozhen, who introduced him to Chen Fake. Feng Zhiqiang was seen by many practitioners of Chen style as the leading expert in push hands, while Chen Zhaokui was seen as the leading expert in qinna. Circa 1980 Feng Zhiqiang began condensing Yilu into 48 postures and shortly thereafter began developing his Hunyuan curriculum. In the early years of development Feng’s performance still resemble traditional Chen style. It was not until his later years that Hunyuan Chen Taijiquan took on its current stylized appearance.

Thank you, Dwight! That is very interesting.

Aren't the two forms taught equally in Chenjiagou? My understanding is that Laojia is the base routine for all beginners (in addition to basic exercises), and intermediate practitioners also learn Xinjia to get a better understanding of the former's applications.

B.BarNavi, I would agree... However, my post is about the origins of the two main frames of Chen Taijiquan, particularly since there are a number of questions about the differences between Small Frame, Large Frame, Old Frame and New Frame. My teacher Dr. Yang has studied with a number of prominent Chen Style teachers, including Chen Zhaokui. He grew up in Jiaozuo north of the Chen village. He was accepted as an indoor student of Feng Zhiqiang in 1988. Although he teaches Hun Yuan Chen Taijquan it does not resemble much of what is taught today. I tend to call it “The Early Years”, since he was under the tutelage of Master Feng when he first began to formulate the Hun Yuan curriculum. In teaching Yilu in 48 postures students are first taught the “Essential Form”. This is often considered to be much like the Old Frame, as the student’s focus is on learning the basic movements, weight shifting, structural alignment, concepts of opening and closing, and etc. Once the student has acquired the fundamentals of the Essential Form they begin the Refine Form. In the Refine Form the silk reeling movements they have been practicing in the 30 Silk Reeling Exercises are now introduced into the form and the postures are expanded upon. The focus begins to shift to how the dantian rotation affects movement, how these spiraling movements are an integral part of opening and closing, how the spiraling action is linked to shun chan and ni chan, while more focus is given to rooting and weight shifting. Erlu or Pao Chui, from what I have seen remains much like the traditional version. It is not condensed to a shorter version, although Master Feng did create a 24 version of Pao Chui much later.