The "Glimpse" That Keeps Us Coming Back to Tai Chi, Qigong, Bagua and Xingyi 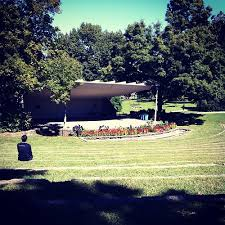 The "Ravine" at Eastern KY University in Richmond, my alma mater.

A Taiji instructor and a former guest on the Internal Fighting Arts podcast, Kimberly Ivy of Seattle, wrote a post on Facebook a few days ago that brought back some vivid memories for me, and reminded me of one reason I have kept coming back to these arts decade after decade, putting myself through the hard work and practice to get better at these skills.

She wrote that some of her long-time students, some of them off-and-on students, told her that it was the occasional "glimpse" they received when practicing that kept them coming back.

I first experienced the "Glimpse" around 1980. I had been involved in martial arts for seven years at that point, and I had been studying Zen Buddhism and Taoist philosophy. One of my favorite books was "Zen Buddhism," by Christmas Humphreys. I loved reading the koans -- little anecdotes or riddles that are supposed to make you realize the inadequacy of logical reasoning and to trigger enlightenment: the "Glimpse."

Here is a koan:

A monk asked Kegon, “How does an enlightened one return to the ordinary world?”
Kegon replied, “A broken mirror never reflects again; fallen flowers never go back to the old branches.”

Here is another good one:

One day as Manjusri stood outside the gate, the Buddha called to him, “Manjusri, Manjusri, why do you not enter?”
Manjusri replied, “I do not see myself as outside. Why enter?”

Most people are familiar with the famous koan: What is the sound of one hand clapping? It is usually said as a joke in the United States. No one actually reflects on the meaning behind the riddle.

So I was sitting one day around 1980 in the Ravine at my alma mater, Eastern Kentucky University. I spent a lot of time there when I was a student (graduated in 1975 with a double major in journalism and broadcasting). It was a terraced field, leading down to an ampitheater, nestled almost in the center of campus.

1980 was a rough year. I was working in TV news but earning so little money, my wife and I were teetering on bankruptcy. My wife was pregnant and having serious mental health issues related to the pregnancy. The baby, a little girl named Shara, would die at six weeks of age from crib death later in the year.

I was visiting EKU and decided to sit in the Ravine and meditate, touching the ground like Antaeus, who maintained his strength as long as he was in contact the ground. Perhaps it would renew my strength for the daily battle.

It was a sunny day. I sat on one of the terraced steps of grass and tried to calm my mind and body, detaching and letting all thoughts and concerns go.

A few moments later, just as I reached my calmest moment, a robin landed in front of me in the grass, just a few feet away. It turned and looked at me. Our eyes met.

For a few short seconds, I felt my connection to the bird and to all things in the universe. A sense of calm, order and acceptance washed through me. It was the most complete feeling of peace I had ever experienced.

Then, just as quickly, the moment I thought, "This is satori," it was gone. Vanished. And I was back in my own head.

When you reach for it, you cannot grasp it. Once you get back into your own head, it is gone.

This moment, this "Glimpse" stayed with me. It consumed my mind all the way back to Lexington that day. And I immediately tried to look for it again. But it does not come very easily when you are caught up in daily activities and concerns.

Satori is when you suddenly are aware of your connection to all things; your place in the universe; your "One True Nature." Sometimes, we simply refer to it as a "connection."

Some people attempt to achieve this through religion, but too often in our society, that means a benevolent (or malevolent) dictator above you, ready to reward or punish your every thought. It too often involves judging others and meddling in their lives, particularly on "social issues."

The "Glimpse" I'm talking about does not depend on invisible beings or gods. In my opinion, having experienced both worlds, I eventually rejected the religious view for a different path. If you are reading this and think, "Oh, I get the same feeling from (Insert Name of Deity Here)," then I would simply note that you probably have not traveled this path.

In 1987, I began studying the internal arts and qigong. Since then, I have had several moments of the "Glimpse." It can happen in the middle of a form, when I feel my body flowing through the movement. It can happen when doing Standing Stake or another qigong exercise. It can happen when I am sitting on the couch with Nancy.

The "Glimpse" keeps me coming back.

On the day that I took my black sash test in the style of kung-fu I was studying in 1997, part of the test involved sparring another black sash with a wooden broadsword. We got into our fighting stances and prepared for the start of the match. I tried to center myself and connect. A calmness came over me, and I felt as if I was part of my opponent.

Mr. Garrett moved to thrust his broadsword and before he could move more than a couple of inches, my broadsword was at his chest.

Ahh, the "Glimpse." Just at the time you need it the most.

Do you ever get the "Glimpse?" It comes when you are in the moment, your ego is gone, your awareness broadens and your mind opens to your One True Nature as it relates to all things, without judging, without liking or disliking.

The journey to achieve this takes you to a place where you react differently to relationships, to aggression, to tragedy, and even to tough deadlines at work. You can take the first step with qigong exercises, Standing Stake and internal art forms. And a great book to read is "Zen Buddhism" by Christmas Humphreys.

It is a journey worth taking.

Here is a website with some great koans to stimulate your mind. And there is a second type of "Glimpse" you get when practicing the internal arts. That will be the topic of my next blog post.

Great post Ken! Unfortunately I don't think I have ever experienced "the Glimpse", but maybe like you I was strongly influenced by books on Zen Buddhism when I was younger, think certainly the direction you are talking about it where I want to go too.