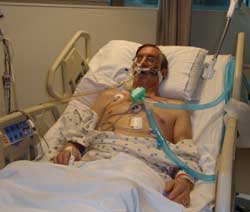 Seven years ago today, I had just commemorated Halloween in a drug-induced stupor, in the ICU at Cleveland Clinic, with a breathing tube down my throat and another tube coming out of a hole in my chest. I had to take strong sedatives, because of my gag reflex. I choked and gagged on the breathing tube, so the only way I could handle it was to be doped up.

My condition made the horror movies showing at Halloween on the Chiller network even more bizarre. There was one movie, playing once a day, that I have not been able to find in the years since this happened in 2009. Nancy says I was hallucinating, but it's remarkable how much I remember of this terrible time, despite the sedation I was under.

I went into the hospital on Oct. 22 for what I thought was a one-hour procedure to try to find out why I had been coughing up blood for about 8 months. But when doctors discovered my left pulmonary veins had closed up, causing my terrible breathing difficulties that year, they tried to stent one of the closed veins, tore it, and pierced my heart with the wire.

The cardiologist came out to see Nancy in the waiting room and said, "There is nothing more I can do for your husband."

That isn't the way it was supposed to go. Cleveland Clinic sent a team of doctors into the operating room and they worked to save my life.

Remaining Centered in the Midst of Crisis

So, as I was drowning in blood that kept building in my lungs for the next several days, Nancy and my daughters, and some friends and sisters, were distraught, thinking that I was about to die. They maintained a cheerful attitude around me, but they would go out into the hallway as I was coughing up jet streams of blood, and they would break down in tears.

Meanwhile, I was in bed trying to wrap my mind around it all, remaining determined to push through it, and keeping my mind on my goal of competing in a martial arts tournament that was coming up in five or six months.

I also put part of my mind on my Dan T'ien and continued to center myself through the procedures, the uncertainty over whether I would live or not, whether I would see my grandchildren grow up, see my daughters develop in their lives and careers, continue to laugh and love with Nancy, and whether I would ever practice kung-fu again.

I did not worry about any of that. I used my internal arts and qigong training and I calmed myself. I needed to be ready for that tournament in late March.

"It is what it is," I reminded myself. Just relax, don't fight it, and heal. If I died, I would be the last to know, so it was not something I worried about. And I never once, not for a moment, considered changing my religious views (I am not a believer in invisible beings and was very comfortable with that, thank you very much).

When I first got sick earlier in the year, the side effect of a medical procedure, I weighed 206 pounds. When I finally hobbled out of Cleveland Clinic late in the first week of Nov. 2009, I weighed 156 pounds and could hardly walk, I had lost so much muscle and so much strength.

Occasionally, I will get an email from someone who tells me that obviously, I was doing Xingyi or Taiji wrong, or I wouldn't have been sick. Obviously, they say, I didn't cultivate enough chi.

I try not to insult their intelligence, although they deserve it, and remind them that perhaps I am alive because I had cultivated strong chi.

That thought usually doesn't occur to them. I wonder what they will think when they grow older and come down with a serious condition or illness. Will they blame a lack of chi cultivation? I don't think so.

As October turned to November in 2009, one doctor after another would come into my room and tell me that I would not be alive if I had not been in the excellent physical shape I was in when I arrived.

By the time I left to make the long drive back to the Quad Cities (against doctor's advice but I wanted to go home), when I arrived home my ankles were swollen. I could hardly walk to the bathroom. I could not walk down to my basement office to work on my website. It was a very long recovery.

Bad News on the Road to Recovery

In the years since, as I have struggled through a loss of muscular strength and a serious diminishing of my breathing capacity, I still have to remain centered and work hard to wrap my head around the fact that I am not as young and strong as I used to be. As a teacher, I can still try to improve, but I can't go toe-to-toe with younger, heavier students and spar or get thrown like I used to. It is occasionally frustrating. I am wrapping my head around the concept of being more of a coach than a fighter.

For a couple of years, the impact of all this left me in heart failure, with a weakening heart that was at 25% of pumping capacity. My cardiologist told me that I could "drop dead at any moment with no warning."

That sort of news will play with your head, no matter how centered you are.

I went to the Mayo Clinic in 2010 for a second opinion. Two doctors told me that my heart would fail within three to five years. 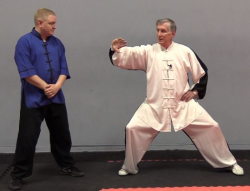 It is now six years later, and thanks to various factors, including medication, my heart is beating normally most of the time, and my EKGs always look normal. I continue to practice, train with my students, and try to improve my internal arts skills.

One of my Facebook friends said I should write about how the internal arts and qigong helped me get through all this.

I think the greatest benefit I have obtained from my practice is better physical conditioning and an ability to ride the ups and downs of life. The mental workout you get from doing these arts and from practicing qigong can help you to remain calm in a crisis. Physically, I believe in cross-training, both cardio and weight-training.

The "internal strength" that I teach includes body mechanics that make your internal arts stronger, giving you the "iron wrapped in cotton" that good internal movement is known to possess. You appear relaxed and smooth, but underneath, there is a powerful martial art that can break an opponent.

But those are the physical benefits. There are mental benefits as well.

You cultivate self-discipline when you work to improve at an art over decades, setting small goals and achieving them one by one.

This is the type of internal strength that is even more valuable than the physical strength that comes from good body mechanics. Your mind, your attitude, your ability to maintain humor during the occasional loss or tragedy -- this is the "iron wrapped in cotton" that I have found to be the greatest benefit after 43 years of martial arts practice.

I have not needed to use my self-defense skills since I began studying martial arts, and I may never need to use them, but every day, every single day, I use the internal strength skills that I have gained from my training.

Good one, Ken. Thanks!