I am finishing up production on a new DVD -- actually, a replacement of my original Silk-Reeling Energy DVD, a 2-disc set I did back in 2008.

The new revised version is all on one disc and it should be ready for market next week.

It includes in-depth instruction on 19 silk-reeling exercises that help you put the key body mechanics of the internal arts into action.

I'll announce next week when the DVD is available on my websites and on Amazon.

A Guided Chaos Workshop - Tai Chi Fighting Insights from the Outside 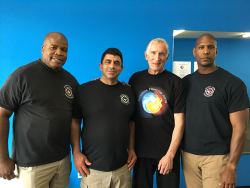 Those of us who practice Tai Chi (Taiji) as a fighting art pursue concepts that represent a holy grail. They are written about in the classics, and spoken of in quotes by long-dead masters including Chen Wangting, who supposedly said:

"I know everyone, but no one knows me."

When I first became interested in the Kung Fu TV show back in the early Seventies, one of the interesting quotes from the show was:

"A Shaolin monk, when reached for, cannot be felt."

When I was 18 and watching that show, I thought that meant something mystical, as if a Shaolin monk vanished in front of you. But the quote resonated with me.

I have done push hands with some Chinese instructors, including Chen Bing and Chen Xiaoxing, who, when I pushed on them, they disappeared and very quickly I found myself off-balance (or on the floor). When I reached for them, they could not be felt.

In other words, I could not find their center, but they could find mine.

For a long time, I've been working to get better at maintaining my center while I control my opponent's center, setting him up for a counter. There are muscular ways of achieving this, and more subtle ways. And so, when my friend Evan Yeung introduced me to Guided Chaos, and its practice of "contact flow," I immediately saw the connection between this aspect of their art and the goal that eludes so many Tai Chi folks who end up using muscle to overpower their opponents, rather than relaxing, sensing, flowing, and controlling the opponent's center.

On September 17, 2016, I spent a day in Cincinnati working on contact flow with three talented Guided Chaos instructors: Lt. Col. Al Ridenhour, Kevin Harrell, and Joe Martarano. It was my second time working with Al and Kevin, and the first time I have met Joe. I hope it isn't the last. These guys are great martial artists.

Another important phrase that we often repeat in martial arts is from Bruce Lee, who borrowed from Taoist philosophy when he urged people to "be water." Pour it into a cup and it becomes the cup, Bruce said. Water can flow, and it can crash.

Contact flow, developed by the founder of Guided Chaos, John Perkins, teaches you to relax and flow around obstacles, redirecting incoming force, moving and maintaining your root, maintaining your center, and, as you flow and find your way, you knock the crap out of your opponent.

This is what Tai Chi is supposed to be. Tai Chi is about fighting, but it aims for more subtle principles and body mechanics than some arts do.

Chen Tai Chi push hands can be brutal. I know people who have gone to Chen Village and come back nursing broken bones. There are strikes, throws, joint locks and more. A good pluck can cause whiplash. If you aren't careful, or if you get a little aggressive, someone will need to heal up for a while. But in the beginning, you should develop sensitivity and be able to move from form to fighting. To do that well, you should develop subtle skills. At least that's what everyone talks about, but few seem to do it.

Practicing contact flow triggered insights and connected some of the dots of Tai Chi in an effective way. A year ago, after my first Guided Chaos workshop, it changed the way I thought about push hands, and this year, it has changed the way I practice push hands.

You should be able to learn some of these subtle skills, but it's not easy to find good push hands instructors, or experienced push hands partners. Another problem we face is that Americans simply do not grow up learning the concept of relaxing and flowing while maintaining the ground, peng, and using the spiraling movements of silk-reeling. Instead, we tense up and want to smash like the Hulk. It's funny to me now when I push hands with someone from outside the internal arts -- how tense they are. But that is how we all feel until we learn, and practice, practice, practice. 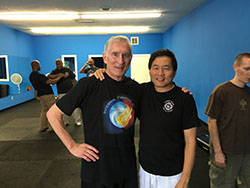 My friend Evan Yeung introduced me to Guided Chaos.

One time, around 1999, a Chinese gongfu "master" came to the Quad Cities to hold a workshop at my friend John Morrow's school. I attended, and at one point during the workshop, the interpreter walked over to me and said, "Master Wong says you have gongfu. He would like to visit your school and practice with you."

I was very flattered. When he visited my school a few days later, he had me put my hand on his chest, and he put his on mine. He wanted me to push him off-balance. That was the first time I ever pushed on someone whose center could not be found, and he wasn't nearly as skilled as the Chen family. It was eye-opening. But he had no idea how to explain it to me. So the concept remained like the Shaolin monk. I reached for it, but could not find it.

Guided Chaos has at least part of the answer, but as a combat art, it is about a lot more than contact flow. It is a no-nonsense fighting art and they will flat out kick your butt. I highly recommend any of their workshops.

I could only spend one day at this year's Cincinnati workshop because I had to return to teach my journalism class. Even one day was enough to inform me on some of the next steps in my own development. I am continuing to work on the relaxed strength, moving, centering, and spiraling that makes up good internal arts, but also allows you to flow like water, remain "out of reach" by your opponent, and then, as Bruce Lee also said, "I don't hit. IT hits by itself."

I can fight, but just fighting is no longer the goal for me, especially at my age. There is something else, skills that have been elusive.

I was working with Joe Martarano at one point during the workshop, and I realized that I was repeating some habits that have been part of my fighting but were not as efficient as I was trying to achieve.

"I need to empty my cup," I said, scolding myself. But Joe disagreed.

"Empty your cup?" he asked. "You already emptied your cup or you wouldn't be here today."

You never know when you will taste someone else's art and learn something that contributes to your own art.