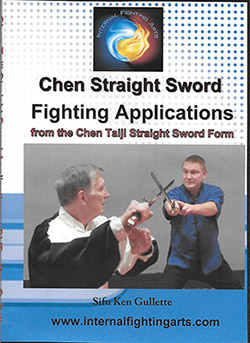 I have always believed if you are going to learn a martial arts weapons form, you should learn to fight with the weapon.

My newest DVD mines the gold inside the Chen Taiji Straight Sword form. I demonstrate 79 fighting applications, at least one realistic application for every one of the 49 movements in the form.

There is also a section that shows step-by-step how to go from form to fighting with a straight sword. How do you work with a partner to put the applications into practice? It is clearly demonstrated.

You will learn how the movements are used in parrying, deflecting, intercepting, adhering, controlling, and also how to counter with various cutting techniques. As usual, I teach with an emphasis on body mechanics.

This DVD is a follow-up to my Chen Taiji Straight Sword Form DVD, which provides instruction on the movements of the form. While it focuses on how to do the movements, this new DVD explores the fighting applications of the movements.

Running time is 1 hour 48 minutes. Check out the clip below for a sneak peak.

The Chen Straight Sword Fighting Applications DVD costs $19.99. There is Free Shipping worldwide, and a No Questions Iron-Clad Money-Back Guarantee -- if you aren't happy for any reason, just send the DVD back and you will get a prompt refund.

Click on this button for our secure order page and within a few days you will deepen your knowledge of the Chen family Straight Sword Form.

The Chen Taiji Straight Sword Form DVD and the Chen Straight Sword Fighting Applications DVD -- Buy Both for only $29.99 with Free Shipping worldwide and a Money-Back Guarantee if you are not satisfied.

Grandmaster Chen Xiaowang and the Story of Students and Spaghetti 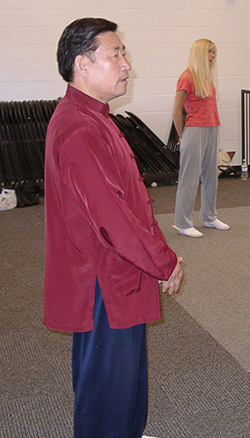 At one of the workshops I attended with Chen Xiaowang, he told the story of a taiji instructor who invited his young, eager students to have dinner with him.

They all sat around the table as spaghetti with meatballs was served.

The master took his fork and tried to spear a juicy meatball that was on his plate. He missed.

The master kept trying to spear the meatball and it kept slipping away from the fork, so he chased it around the plate, stabbing and missing.

After a moment, he looked up at his young students seated around the table. Each student was chasing a meatball around the plate just like the master was doing.

That is how the master does it, so that is how it must be done. The master is showing us the way!

I am paraphrasing this story. In Chen Xiaowang's version, the master may have been using chopsticks - it has been a while, but the gist of the story is the same, and he laughs when he tells it, but as you look around at the students who are listening, you see them smile and shake their heads because they see the truth in the story.

Yes, we are all guilty. We see a master do a movement one way and we think, "That is the way it is done. There is no variation!"

Later, we see the master doing a movement differently, and we wonder why he changed it. And if the master makes a mistake, students who follow blindly continue to make the mistake.

Then we get confused when we see a different master doing the same movement differently. But THAT is not the way it is done! Some masters of Xingyi don't bend, or "seat" the wrist when the lead hand is forward in San Ti. Some hold it another way. Some bagua masters used the ox tongue palm, others used the willow leaf. Once a master does it one way THAT IS THE WAY YOU MUST DO IT, or at least that is what students often think.

Some of my students will ask questions about small, subtle placements of hands, or one particular way of doing one tiny part of a movement. Sometimes, I tell them to follow the way that I learned it, but I sometimes tell them that it doesn't matter. You can do it this way, or you can do it that way. As long as you are maintaining the proper structure and mechanics, some of the little things don't matter. Also, as long as it still works in application, that is a good guide to follow.

Gongfu masters are human beings. Honor them, learn from them, get corrected by them, and follow them as well as you can. But don't check your brains at the door. Think, study, and apply your knowledge and carry the art forward. But don't be frozen in time like a snapshot just because "that's the way the master did it." And don't forget -- other masters might have a better way. Don't become too attached to one way of doing something.

Don't be a meatball. 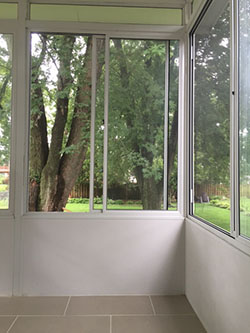 Do you make a habit of practicing Zhan Zhuang -- "Standing Stake?" It can change your life.

This is my little Standing spot, in the corner of a 3-season porch, just a few feet from a tree in my backyard. This morning, light rain was hitting the roof, and I could hear birds and the little shrieks of squirrels as I relaxed, breathed, and felt my energy melt into the floor.

You don't have to believe in the scientific reality of chi to get a lot of benefits out of Zhan Zhuang. The benefits come from calming the mind, relaxing the body, focusing on your breathing, and holding the solid structure of Taiji.

I recommend starting your day this way, even if you only have time for five minutes. Later, as you go through your day, your goal should be to recapture this calm, centered, relaxed feeling when you encounter a stressful moment, as we all do every day. Whether it is someone driving like a crazy person, or an inconsiderate boss or customer, or an angry spouse -- make it your goal to recapture the feeling of Standing instead of reacting with tension or anger.

You will notice a difference, and so will your body.

The new edition of the Internal Fighting Arts podcast features an interview with Robert Allen Pittman, a martial artist and author who teaches Xingyi and Bagua through his system that he calls Wisdom of the Body. He is the type of martial artist I love to talk with -- a man who has gone to extraordinary lengths to learn his arts, particularly Xingyi and Bagua.

Allen was a student of Robert W. Smith, a pioneer who wrote some of the first books about Chinese kung-fu for the Western audience. Allen also co-authored books with Robert W. Smith on Xingyi and Bagua.

I was thumbing through my martial arts library a few weeks ago when I came across his book, "Walking the I Ching." I tracked him down on the Internet and we arranged an interview while he was visiting his mother in England. I have seen his name for a long time, because of his work with Robert W. Smith, but I had no idea that he had such a good story.

Download the file or listen online by following this link, or play here: