When I teach the internal arts - Xingyiquan, Chen Taiji and Baguazhang - I teach fighting applications with the movements.

It is very important to learn how to move from form to self-defense. A positive learning environment helps, where your partner is trying to help you internalize the meaning and the application of the movement.

My website - www.internalfightingarts.com - has more than 750 video lessons and downloadable pdf documents.

This is a short clip from some of the videos we are currently shooting and putting on the site. It shows a Pi Chuan cutting block and deflects and redirects your partner's energy, setting you up for a counter.

If you enjoy this, visit the site and try two weeks free with absolutely no risk and no contracts. 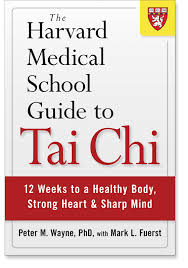 Tai Chi is a martial art. Every movement is a powerful fighting application for self-defense.

But is it also a healing art? Does it have benefits that are more powerful than normal exercise, and if it does, do those benefits come from the slow, controlled nature of Tai Chi and the mindful, meditative components and from the flow of chi?

I would guess that more people consider it to be a healing art than a martial art. But is it really? Or when it is done in slow motion, is it one of the most low-impact exercises that elderly people can do to get them moving and to get their minds off their problems?

Do we think of it as a healing art based on outdated stories and science that doesn't hold up?

And do clinical trials show benefits that can be attributed simply to exercise and calming meditation, or is it something more? Are the health benefits of Tai Chi anything special?

Almost a year ago, I bought the Harvard Medical School Guide to Tai Chi, by Peter Wayne, Ph.D. I began asking Peter to appear on my Internal Fighting Arts podcast last August. After the podcast last month with Dr. Harriet Hall, the "SkepDoc," and the heat I encountered from some in the Tai Chi community following that interview, I thought it was time to balance the scales and talk to someone who is obviously more inclined toward the "traditional" view of the art.

Last week, I was finally able to talk with Dr. Wayne for an hour. The result is this podcast, the 24th in the series.

Don't miss the final five minutes, as I clarify part of the interview and have some final thoughts that wrap up some of the issues raised in the past two podcasts.

Follow this link to listen online or download the mp3 file to your computer -- the Internal Fighting Arts podcast 24 - Peter Wayne. 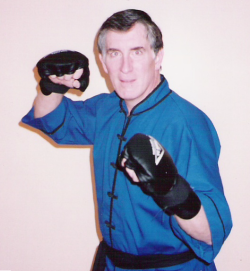 What do you do when life gives you a roundhouse kick to the head? A punch to the groin? A heel kick to the solar plexus?

Nineteen years ago this morning, I walked into WHBF-TV, where I was news director, and management was waiting for me. I was pulled into a meeting where the GM and the Program Director told me they were letting me go. In the news business, it happens.

"I have two words for you," I replied, and saw them brace as they sat across the table.

I left the station, and by the next day, realized that while I was looking for another job, I would train hard and finally test for my black sash in kung-fu.

I worked hard for a month, went to Omaha to test, and succeeded. I began teaching by October. By that time, I was working at Mike Bawden's ad agency in Davenport. From there, I went to ACT (the college test) as director of media relations.

Being fired from a job changed my life in a very positive way. Besides pushing me toward a new career in media relations, PR and communications, it helped me take steps that have resulted in a third career, teaching martial arts to people around the world through this blog, my DVDs and my membership website.

After more than eight years at ACT, I decided to try something new, so I took a job as director of media relations at the University of South Florida. It was a great job, but I found myself being asked to hold news conferences and do media interviews on sensitive topics ranging from students arrested on terrorism charges to football players accused of cheating. It was more intensely political than I expected, and each time I did an interview on behalf of President Genshaft, I walked away with arrows in my back, often fired from within the University.

Within a year, I was diagnosed with atrial fibrillation and a week later, I found myself without a job. My nephew, Brian Ragsdale called to talk, and he sparked the idea for my website, www.internalfightingarts.com. I would work for myself, putting all the instruction onto video lessons that I had been teaching my students for over a decade. I would offer it to people around the world who wanted to study but didn't have a teacher nearby. I began making DVDs more prolifically, and on July 4, 2008, the website was born and it is going stronger than ever eight years later.

None of it would have happened if management hadn't asked me, 19 years ago this morning, "Ken, you got a minute?"

How can you turn a life-changing negative event into something positive? You can do it. I am living proof. But after all, one of the things our philosophy in kung-fu is supposed to do is help you ride the ups and downs of life, isn't it? Trust me, I've seen as many downs as anyone. If you hang in long enough and work at it, yin will always turn into yang again. The wheel turns.

Sometimes, an event that seems to be really bad at the moment can be just the push you need. The next step is yours.