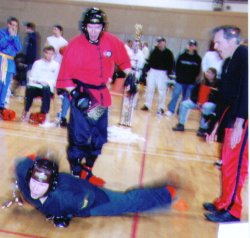 My opponent in this match provided an example of NOT using the Three Internal Harmonies.

He was in his twenties -- young and cocky. I was in my late forties. I could tell by the way he carried himself and the way he looked at me that he thought it was going to be easy. He thought he was going to kick my butt.

It really made him mad a moment after the match started when I swept him to the ground. He hit the wooden gymnasium floor hard, and when he got back up, he was STEAMED!

I always loved to spar in tournaments. It was great competition, and it refined some of the skills you need for self-defense on the street. Even in "no contact" tournaments, a lot of contact was made. Ribs were cracked, jaws were jacked, gashes were opened up sometimes. Damn, it was fun.

In a tournament match, I never lost my cool. If my opponent scored on me, I would congratulate him.

"Good shot," I would say. The referees loved the sportsmanship. I never got angry. If my opponent was good enough to score a good shot on me, he deserved a pat on the back. And then a roundhouse kick to the head, heh heh.

This young karate guy I sparred in 2001 was one of those guys who proves the validity of the "Three Internal Harmonies" concept in the internal arts.

When you are successfully using the Three Internal Harmonies, your "heart" or "spirit" is in harmony with your "intent," or your logical mind.

When your "heart" and your "intent" is strong and in harmony and your "energy" is strong, you can then use your "strength" and skillfully defeat your opponent. 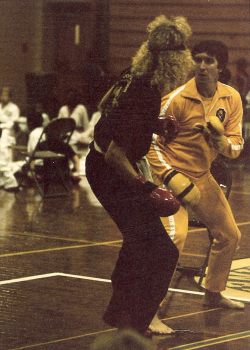 A Cincinnati tournament in 1983 - the Eye of the Tiger.

This is the best example of what the Three Internal Harmonies really means. There is nothing mystical about it.

At this tournament in 2001, this strong, cocky young man came at me hard. But when I swept him, he lost his cool. He became angry and his "intent," or logical mind became scattered with anger. His "heart," or emotional mind took over. He was no longer in harmony. He couldn't focus his strength or technique and became out of control.

I never could understand why guys would get angry in tournament matches. I met a lot of really great competitors with good attitudes, but I have to admit -- I enjoyed it when my opponents got angry. It was a good sign that I was going to win.

As the years passed, I grew to enjoy sparring so much, I stopped keeping score during the match. It didn't matter to me who won any particular point. The judges would stop us, they would rule on the point, then tell us to resume fighting.

I remained calm and centered, and took each point as it came. Sometimes, at the end of the match, I was surprised to find that I had won.

The lesson of the Three Internal Harmonies can be applied in self-defense, but also at work and even in your personal relationships. When faced with an impossible deadline at work, when faced with an angry spouse or child at home, simply understand that you have the ability and the skill to solve the problem, focus your calm attention on the problem at hand, and get to work.

The Three Internal Harmonies can really help you out when someone is trying to kick your butt. But this concept is intended to be used not just as a method of fighting, but also as a way of life.