Home Archives Profile Subscribe
Acupuncture, Qigong and Jesus -- Why Traditional Chinese Medicine is Like Religion
Remaining Centered in the Heat of Battle and the Three Internal Harmonies

Pulling the Internal Martial Arts Out of the Pre-Scientific Past 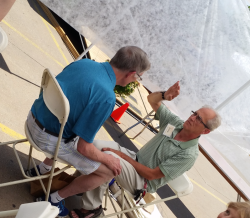 Steve believes he is shooting light out of his hand to "lift" me spiritually.

Steve said he could emit light from his hands and "lift" me spiritually if I would "receive the light." It is a practice called "Sukyo Mahikari."

"You emit light from your hands?" I asked.

"Yes, would you like to try it?" he replied. I said sure.

I sat down in a chair facing him. He sat across from me.

I closed my eyes and relaxed. Steve, a mild-mannered, soft-spoken man about my age began praying in a language I had never heard. After a moment of prayer, he held up his hands and began shooting light out of them, I suppose. At least that's what he thought he was doing.

I peeked once during the 10-minute session and there was no light coming out of his hands. Maybe it was beyond the visible spectrum. So I cooperated, relaxed, and tried to be receptive to whatever happened. Nothing happened.

At the end of 10 minutes, he prayed again in tongues and then told me to open my eyes.

"Did you feel anything?" he asked with a hopeful look on his face.

"No, I was just relaxed and being receptive," I replied. He seemed very happy with that.

I had not felt a thing, and I can guarantee you that Steve was NOT shooting light out of his hands, visible or invisible.

"You are a nice man," I told him, shook his hand, and rejoined my wife Nancy and daughter Harmony, who were walking around the Health and Wellness Fair with me.

This happened last Saturday in Davenport, Iowa. Mixed among the booths for hospitals and various healthcare companies were "health and wellness" claims that were simply beyond rationality. Among them -- acupuncture and chi healing.

How does a nice, middle-aged, obviously intelligent man believe he has learned to emit light from his hands? He went to Chicago to take a course to learn how to do it. I hope the course didn't cost very much.

I have taken a little heat over my recent Internal Fighting Arts podcast with Dr. Harriet Hall. Chi believers think it was unfair. I even received an email from a "skeptic" who said it was too one-sided. I disagree. It was exactly the interview that a lot of people in the internal arts still need to hear.

The people who were most critical of the interview earn money from acupuncture or some other form of "energy healing." To expose these practices as devoid of scientific merit is to threaten their income.

I think some people were offended that I compared belief in bogus science to belief in religion. It is not my intent to offend my friends. I am simply offering a different viewpoint, and insights that are based on my discussions over the years with believers of ancient "science" and religions. There are many parallels in the thought processes, and the way people defend their beliefs when the evidence is not there to support the belief.

And so this debate was happening as I attended the local Health and Wellness Fair and came upon the only booth that involved acupuncture and energy healing. It was a business out of Iowa City and it also offered Feng Shui, Chinese Herbal Medicine, Past Life Regression, Reiki, Shamanism, Healing Touch, ThetaHealing, Tarot Card readings, Emotion Code, Access Bars, and Angel Card Readings.

A sweet older lady at this booth told me about the Angel Card Readings.

"We spread out three decks of Tarot cards," she explained. "You select some of the cards. Then we get in touch with your angels and they give you advice."

I wanted to ask why angels would need Tarot cards as an intermediary, but I suppressed my Inner Smartass.

"Do you really believe angels communicate with you?" I asked.

"Oh, I KNOW they do," she replied earnestly.

And that's what they all say:

"I KNOW that chi can heal you."

"I KNOW that Jesus healed me of my drug addiction."

"I KNOW that you can remember your past lives."

I found it almost embarrassing that acupuncture and energy healing were part of this booth's offerings. All internal martial artists should be ashamed that we are caught up in this nonsense. Far too many of us incorporate these bogus, superstitious beliefs into our arts and tell gullible students that it is based on "science" that is "thousands of years old."

Astrology is thousands of years old, too, and there is evidence that acupuncture was patterned after astrology. One researcher who was trained in acupuncture calls it "astrology with needles."

When I first started banging the drum of critical thinking in the 1990s, I was told to shut up by some internal arts teachers, especially Tai Chi teachers. Most of them simply turned their heads when instructors made claims of miraculous chi powers. I didn't turn my head, I challenged them.

Now, the number of critical thinkers in the arts has grown, but there is still a lot of work to be done.

The internal arts are martial arts, based on unique ways of moving and unique ways of dealing with the force of an opponent. They are based on a calming, centering philosophy. I do qigong as a stress management, centering technique. There is nothing wrong with that. Problems arise when you begin to pretend that qigong can be used to treat medical conditions. It might get someone's mind off of pain for a while, but it cannot help you heal from anything.

Just because Chen Wangting might have woven some old Chinese folk medicine theories into his art does not mean we can't move beyond it. Honor his legacy, yes. Acknowledge this was part of the founding of the art, yes. But we must also acknowledge, out of honesty and intellectual integrity, that all of these TCM theories were developed in pre-scientific times, in the days when the Chinese believed they could heat a turtle's shell and tell the future by the cracks that developed in the shell. They were developed by people who believed you could write a petition to the gods, burn the paper and the message would rise to heaven to be read by the gods. It might be as valid a belief as eternal reward or torture, but it is equally lacking in evidence.

The five elements do not actually relate to specific internal organs. The "flavors" do not really relate to the elements and organs. No human being can hold their hands close to me and "assess my chi."

And Steve cannot shoot light from his hands. It's time to move beyond this silliness, and that is the purpose of the most recent podcast.

Posted at 07:30 AM in Alternative Medicine, Science | Permalink | Comments (0)