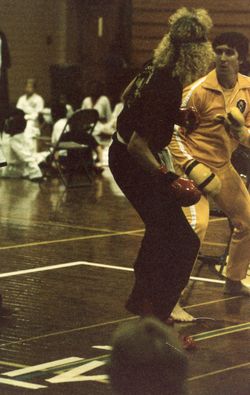 Did you ever find yourself in a situation where a bigger bully attacked you and it was clear that you didn't have a chance? Have you ever been frightened and covered up to protect yourself?

Here is another question. Have you ever found yourself in a position when you had to defend yourself and you were determined to win?

There is a big difference between those two situations, and the difference is Spirit.

In the internal arts, Spirit is called "Shen." It is the "emotional mind."

The Three Internal Harmonies begin with Spirit. The state of your emotional mind combines with your Mind/Intent ("Yi" -- pronounced Yee). Shen is often called the "emotional mind" while Yi is sometimes called the "wisdom mind."

Think of one of the greatest fighters in history -- Muhammad Ali. Think of his attitude when he entered a fight. Confident, bold, smart, ready and willing to rumble.

Then think of a time when you were sparring -- or perhaps in a fight in school or on the street -- and you were not confident, not sure of your toughness, and afraid you were going to be defeated.

This is the difference between strong and weak Spirit.

Sometimes, I get on students for having weak Spirit. They just sleep-walk through their techniques in a sloppy way. Sometimes, I can tell a student's spirit is weak when he expresses doubt in his ability to defend himself. 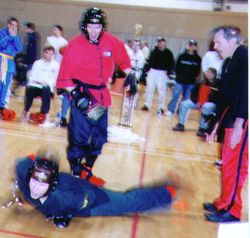 One student spent years training, but he was unable to solve his own poor self-esteem. He constantly put himself down and said he would be unable to defend himself in a real fight. Early on, he competed in tournaments, but he was defeated time after time, and it became a vicious cycle -- he did not have the Spirit to win and he did not win. He gave up and stopped competing.

"I can point the way," I told him many times, "but I can't take you there. You have to understand and believe that you can do this."

When I find myself in a situation that could potentially require self-defense skills, I instantly adopt the Eye of the Tiger. I am calm but ready, and I will not be defeated. It is this Spirit that helped me win fights when I was younger and tournaments when I was older.

When rapists are targeting victims, they look for women who appear to have weak Spirit. Women who are confident and appear strong are passed by in favor of victims who look like they will not fight back.

When you are determined, and have good technique, your Strength (Li) happens naturally. Strong Shen and Yi and good Chi cannot help but generate strong Li.

This is the meaning of the Three Internal Harmonies. It is not mystical. Chi does not mean a mystical invisible energy flowing through meridians in your body. It means proper structure, mechanics, and technique. Strength is the result of a strong mind and a precise body.

By training seriously, pushing yourself toward precision, power, and good conditioning, and sparring with a variety of partners to develop your self-defense skills, proper Spirit should come naturally.

But I can't take you there. I can only point the way. Your Spirit is unique and lives within you.

Finally, do you want to see a great example of Spirit? It is embodied in a small French bulldog who could have been eaten by two big bears that invaded his yard. But his Spirit and his Intent produced some powerful Chi. It is a funny video, but it truly drives home the point. Do you have the Spirit of this bulldog?