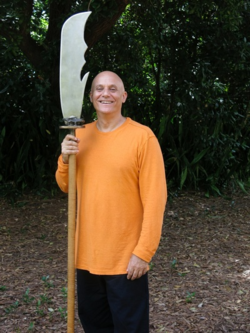 The 19th edition of the Internal Fighting Arts podcast features the second part of a two-part interview with Chen Tai Chi instructor and Taoist Monk Yunrou. He became known as Arthur Rosenfeld, as a martial artist and author, but has taken on the name he was ordained with as a Taoist monk -- Yunrou.

This interview covers some interesting topics:

** The need to boost the self-defense aspects of Tai Chi.

** The problem of "having a plan" in fighting.

** The Guan Do and its relationship to Tai Chi Chuan.

** Becoming ordained as a Taoist monk.

Yunrou lives and teaches in the Pompano Beach/Boca Raton area of Florida. His website is www.monkyunrou.com.

Here is the link to listen online or download the podcast on Audello.