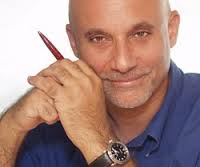 Arthur Rosenfeld is an author, ordained Taoist Monk who was ordained with the name Yunrou (pronounced "Yoon-ro"), teacher and a student of Chen Taiji Master Yan Gaofei.

As Arthur Rosenfeld, he is author of more than a dozen books, including "Tai Chi: The Perfect Exercise." He has also written fiction, and his newest book, "Yin," written under the name Yunrou, is described as a "Lao Tzu love story" and will be published November 1, 2015.

This is part one of a two-part interview with Yunrou, in which he talks about the forces in his life that drove him toward the martial arts, Chen Taiji, and the philosophy of Taoism.

You can listen to the podcast online or download the file via this link: http://internalfightingarts.audello.com/internal-fighting-arts-18-taoist-monk-yunrou/.

It will also be available on iTunes, where you can become a subscriber.

By the way, at the end of the podcast, Yunrou tells of an incident he was involved in at Starbucks, resulting in a "random act of consciousness." You can see the story that went viral by clicking this link to the NBC Nightly News report.