Stepping Out of My Comfort Zone -- A Guided Chaos Workshop 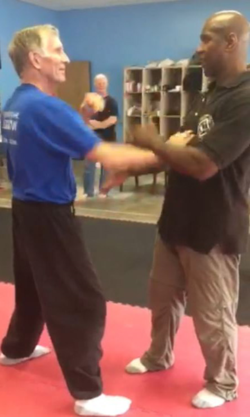 Working on Contact Flow with a master at his art, Lt. Col. Al Ridenhour.

Have you ever emptied your cup and attended a workshop that is outside your comfort zone -- outside the art that you typically practice?

Some of the most valuable instruction I have ever received has been from people who made me feel like a complete beginner. I feel this way when I study with any of the Chen family, and I felt that way when I worked with my best teachers. I also felt that way when I attended a "Guided Chaos" workshop in Cincinnati last weekend and worked with Lt. Col. Al Ridenhour and Kevin Harrell.

I was introduced to Guided Chaos through my friend, Evan Yeung, a few years ago. How can I best describe this art? There are no forms. It is a no-nonsense method of handling the chaos that can happen when you are face-to-face with real-life violence. It is a fighting art.

When I first heard of it, I was skeptical. The world is full of people who "created" their own martial art. Very often, that means they were not willing to put in the work to master a real martial art. During the past few years, when Evan worked with me on Guided Chaos (at the same time I worked with him on Chen Taiji, Xingyi and Bagua), he showed me an exercise they call Contact Flow. I immediately saw the connection with push hands, but it was more than just a connection. Through Contact Flow, I was recognizing skills that all internal artists -- especially those who practice push hands and close-up fighting skills -- should develop, but many of them don't.

I have seen Al Ridenhour in the Guided Chaos DVDs. The videos do not do him justice. When I read about him 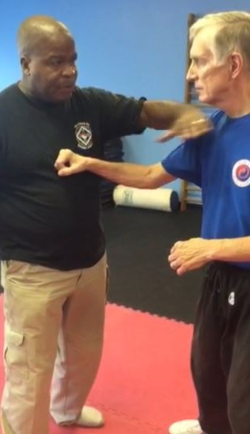 Every bit of advice Kevin Harrell gave me at the workshop was gold.

and Kevin on their website, both had the title "Master." Naturally, I rolled my eyes. But after I worked with them for a weekend, I realized the titles are deserved.

Contact Flow is one of the skills they practice that resembles push hands although there is no "pattern." You start very slowly and match the speed of your partner. Each of you tries to strike and defend, but by starting slowly, you learn just how out-of-balance you can become and how inefficient your movement can be. As you get better, you speed up, but as in any quality art, it takes a while to get better as you overcome bad habits.

In person, both Al and Kevin could get through my defenses at will. And as I worked on it with other partners, they would offer coaching that was spot on. I took a lot of notes and have plenty to practice -- and plenty to apply to my push hands.

I used to drive a couple of hours to Rockford, Illinois, to study with my teachers Jim and Angela Criscimagna. In the car on the way home, I would always feel like bouncing around because I was excited at what I had learned. I felt the same way driving the 7 1/2 hours from Cincinnati back to the Quad Cities on Sunday night.

I have attended workshops by a lot of great martial artists -- from Bill Wallace to Kathy Long and the Chen family, plus some workshops I have forgotten. The Guided Chaos workshop was one of the best and most practical that I have attended. I can't say enough about Al and Kevin. They are great teachers.

The founder of Guided Chaos, John Perkins, doesn't really have a lineage in Taiji. To look at him, you certainly wouldn't guess he is a martial artist. And yet, he apparently is one of those people who comes along once in a while and possesses a gift. There are no forms in his art. It is designed for use in real-life self-defense. And yet, he has captured the essence of something that has eluded many internal artists. It should be required training for anyone in the internal arts. Hell, it should be part of any martial artist's training. 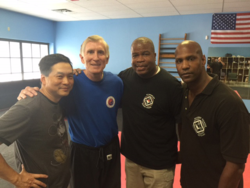 Most people never get to a level in push hands that approaches what I would expect from a good Contact Flow practitioner. And while in push hands we work hard to maintain a centered stance at all times, in Guided Chaos they work to strike from their root even when they find themselves in an off-balance or awkward position. It is a very complementary concept to what good internal arts should be.

And we didn't even get into the Guided Chaos ground-fighting or other aspects of their training. But you can check it out on their website.

I enjoy the "art" part of martial arts. I love the precision of the forms and enjoy working on my body mechanics and movement. I have not been in a "real" fight since I was 18, and I try to avoid situations where I would need to use my martial skills. So at 62 years of age, I would not be satisfied to study an art that does not include what I get from Chen Taiji, Xingyi and Bagua, which are great fighting arts if studied and practiced properly. And when it comes to real self-defense, there is NO one-size fits all. For every attack that is raining chaos on you, I can show you two YouTube videos where one punch ends the fight. So you can put down one glass of Kool-Aid and replace it with another if you aren't careful. I try not to drink the Kool-Aid, remaining open to the truth in different styles.

There is truth to discover in Guided Chaos, and it fits perfectly into whatever internal or external martial art you are studying.

My thanks to R.J. Trusty for hosting the workshop at his Five White Tigers Martial Arts school. I will be at the next one, too.

Extra Note -- For more about Guided Chaos, here is the Internal Fighting Arts podcast I did with Ari Kandel earlier this year.

Posted at 11:59 AM in General, Other martial arts, Self-defense | Permalink | Comments (1)

Informative and nicely written, Ken. The point about stepping outside of your comfort zone is so critical to progress. Thank you.