Connecting -- The Number One Skill in Tai Chi, Hsing-I or Bagua 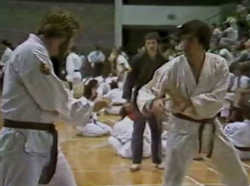 I am on the right against a fast, skilled opponent.

I was sparring a guy in 1980 and he was taking it to me. He was fast, with a great reverse punch that had nailed me a couple of times as I moved in on him. I was tensing up, trying to figure out how to beat him.

Then I connected. I relaxed and got my head out of the match. I waited with a relaxed state of readiness for him to move. 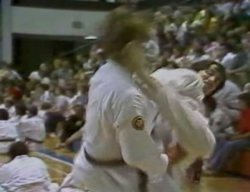 After connecting, I was ready for his attack and nailed him with a hook kick.

When I took my black sash test in 1997, among the many tasks I had to perform was a sparring match with wooden broadswords to show strategy, technique, and skill. My "opponent" was another black sash with a wooden broadsword. He was cocky and considered himself a lot better.

I relaxed and calmed my mind. I centered, and connected with him. We assumed the on guard stance.

The instant he moved toward me with his sword, the tip of my broadsword was already touching his shirt at the heart. It would have been a clean kill. One cut, fight over.

Have you ever sparred with a martial artist whose reactions to your techniques were sluggish and seemed to lag behind yours?

You throw a technique and it gets through, or he deflects it, but his counter comes after a beat, giving you plenty of time to throw another attack or prepare for the counter. It's as if he has no idea you are going to attack until the attack has landed.

He is not connected.

When you are not connected, you will always work a step or two behind your opponent or your partner. Being connected allows you to respond like an echo, or as the Tai Chi classic says, "When my opponent moves, I move faster. When my opponent arrives, I am already there."

The same is true in Hsing-I and Bagua.

Look at this video. It shows a Hsing-I fighter who thinks that if he just has a good San Ti stance, he is doing Hsing-I. He is not connected to his partner and the result -- he gets knocked out.

Maybe this isn't fair. This is a poorly trained fighter. He has no business being in a full contact match. I hate seeing someone suffer a concussion for such a stupid reason as this. A concussion can change your life. But this post isn't about that sort of stupidity -- it's about the lack of a connection with your opponent, which he displays.

The art of connecting to your opponent is the number one skill in the internal arts and there are plenty of ways to practice. Here is one. 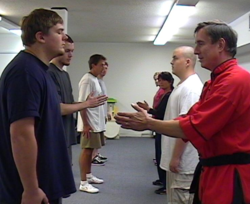 A connecting drill -- my partner prepares to try and slap my hands.

Your partner should stand with his hands at his sides. You will stand in front of him with your hands in a "prayer" posture (palms together) held out at a range where he can reach them.

Your partner is not allowed to fake. His goal is to slap your hands before you can pull them away.

This drill requires you to relax -- remain in a relaxed state of readiness -- and be hyper-sensitive to your partner's intent and his physical movement. You must pull your hands out of the way before your partner can slap them. 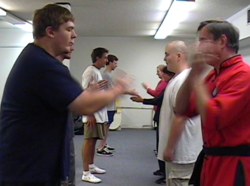 I connect with Justin Snow, my partner, and get out of the way before his hand can slap mine.

After a couple of minutes, switch sides. You will hold your hands at your sides and your partner will hold his hands out, giving you a chance to slap them. He will need to connect with you and pull his hands out of the way before you can slap them.

This is also a good reaction drill and a speed drill, too. If you are trying to slap your partner's hands and you telegraph your movement, he will easily be able to avoid being slapped.

This is just one of many connecting drills. The concept can be carried forward into sparring. Become your opponent. Relax and be ready. Anticipate his movement. When his attack begins, you should already be moving. When his technique arrives, you are already there.

Connecting is not just a concept for fighting. This is a skill that also carries into your daily life. Are you connected to the people at work? Can you anticipate when your boss or a co-worker has a need for your skills?

At home, are you connected with your spouse and your children, or do you mentally detach yourself? Do you listen? Do you become "one" with your partner?

When you interact with the world, are you connected? Are you doing more damage than good to our planet and to the creatures that inhabit it? Can you do better?

Do you have empathy for other people who feel wronged, abused, or disrespected by society or by authority? Can you connect with them and see the world through their eyes?

A lot of good things happen when you learn to connect. 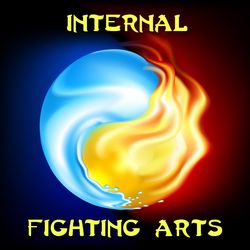 Byron Jacobs is a South African who moved to Beijing to study with his Xingyi teacher, Master Di Guoyong. The interview I did with him for my Internal Fighting Arts podcast should inspire any martial artist.

Besides studying Xingyi simply for the art, Byron also works for the International Wushu Federation.

We talk about how he got into martial arts, the culture shock of moving to Beijing, what it's like to train with his teacher, and some of the finer points of Xingyiquan (also spelled Hsing-I Chuan).

Listen online or download the mp3 file through this link to the Internal Fighting Arts podcast on Audello.

It will also be available on iTunes.

Do You Understand the Body Method ("Shen Fa") of Your Martial Art?

What does the term “body method” mean when it comes to Xingyiquan, Taijiquan and Baguazhang? The Chinese term for body method is “Shen Fa.”

Putting it simply, body method is the way you train your body to move in practicing an art so you achieve the result of moving in this same way when you do self-defense. It involves structure, body mechanics, and concepts for receiving and discharging force.

Each art has distinct ways of training, but I have broken some of the key body mechanics down, and I teach those body mechanics as a way to begin developing the body method for effective internal arts.

The six key body mechanics include:

When you develop these six body mechanics as you train the various exercises, forms and fighting concepts of the internal arts, you develop the body method. 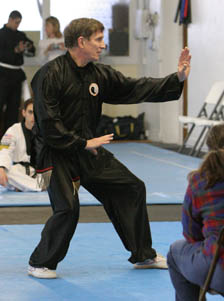 Ken performing Xingyi at a tournament in 2006.

For example, holding the San Ti stance in Xingyi. With proper instruction, it teaches you to drop your energy, to root, to establish the ground path, peng jin, and develops leg strength, a solid base from which to move. Some people also use Standing Stake (Zhan Zhuang) in their Xingyi practice, but holding San Ti accomplishes the same thing. Other teachers have various training methods and exercises to help develop the body method.

When you learn the fist postures, you learn to move in a connected way, using whole body movement and maintaining the ground and peng even when exploding forward to take an opponent’s ground. You learn Dan T’ien rotation and opening/closing the body. And you learn how to apply all these mechanics and delivering power through opening the body and closing the body, in rising and in falling, in crossing, at angles, and in moving straight.

This body method is developed as you work on your forms, but the test comes when you apply it against a partner.

Working with partners in two-person drills helps you develop further, and then you should incorporate light sparring into the mix. As your experience and skill grows, your sparring can include a bit more contact.

Along with body mechanics and structure, sparring also allows you to develop the proper intent – the proper “spirit” of Xingyi – which should be confident, strong and willing to explode through an opponent and take his ground.

When most of us are new to martial arts, we react to someone attacking us with tension – by “rising” up with the body and tensing the muscles. Our mind scatters and we are often overwhelmed by the information our brain is receiving, not to mention our mind’s refusal to believe we are being attacked. Quite often, our reaction is to cover up, hoping the attack stops.

When you develop the body method and the proper intent of Xingyi, you react differently – sinking your weight, establishing structure and instantly adopting a mindset of driving your opponent off his ground – and driving his head off his shoulders.

I have been involved in martial arts now for nearly 42 years. We all start with the desire to improve our self-defense skills. And even as we grow older, as the arts evolve into something beyond simple self-defense, it is common to go through “what if” scenarios in our minds when we are out in public. “What would I do if this guy suddenly took a swing at me,” or “What would I do if that group of guys came rushing at me?”

I study three internal arts, but Xingyi is the one that I use when I visualize those “what if” scenarios. As I think through these visualization drills, I also visualize my body moving in the way I have trained it to move when doing Xingyi.

The body method of Taijiquan has some similar qualities to the body mechanics of Xingyi, but it also includes many different ways of moving that you don’t find in the more explosive art of Xingyiquan. It includes methods of dealing with an opponent's force and controlling an opponent's center that are sometimes unique and more subtle than Xingyi.

The body method of Baguazhang has certain mechanics that are also common to Taiji and Xingyi, but it also involves unique ways of moving, twisting and walking. It also involves concepts of dealing with force and controlling the center that are subtle like Taiji.

The concept of Shen Fa -- Body Method -- is fairly new to Western students of the internal arts. Quality internal arts instruction has only arrived in the United States during the past 20 years or so.

Can you summarize the body method of the art you are studying? If you can’t, you should ask your instructor for help in understanding it.

Two DVDs that help you start developing body method are the Internal Strength and Silk-Reeling DVDs. They contain exercises and concepts that provide the foundation for all three of the internal arts.

Neil Ripski is a martial artist whose school is Red Jade Martial Arts, located in Creston, British Columbia. In a rural part of Canada, he pursues martial arts as a living.

Neil is the guest on the latest edition of the Internal Fighting Arts podcast. He studied and teaches Ma Family martial arts, including a Drunken style, and he also studies and teaches Xingyi, Chen Taiji, and Bagua.

In this interview, he discusses Drunken style and why he considers it an internal art. He also talks about how his first two teachers taught him a lot about now NOT to teach. And we get into other areas of the internal arts as well.

Listen to the podcast online or download to your computer via Audello.

You can also find this podcast and all the past episodes on iTunes. Subscribe on iTunes and each new podcast will automatically download.