A Simple Concept of Baguazhang - The Spinning Wire Ball There are three images that summarize the three main internal arts. They are simple images and do not encompass all the subtleties but still represent good concepts.

A Taiji fighter is like a beach ball being submerged into a swimming pool. The ball will take your energy and 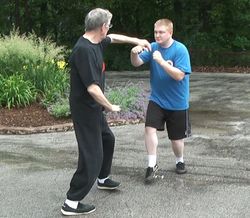 give a bit, but there is strength underneath, and it will spring back and spin, dumping you into the water.

Bagua is like punching into a spinning wire ball. The ball catches your force and spins you off-balance, controlling your center and spinning you out in unexpected directions. It often leaves you broken by the time it spins you out.

Here is just one example. My opponent 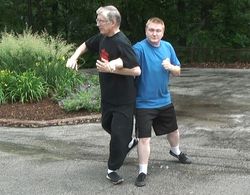 punches. I intercept the punch, wrapping my left arm around his punching arm. At the same time, I begin spinning to his outside.

I hook his right arm and continue to spin. At this point, I can break his elbow or dislocate his shoulder, or both. At the end of my spin, I am in position to also strike to the back of the neck or head. 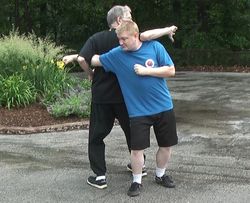 Some of my favorite Bagua techniques involve uprooting, unbalancing, and controlling the opponent's center. This technique is a good example of punching into a spinning wire ball and being broken by the spin.I am also striking my opponent in the direction he is traveling. That is part of our fighting strategy called "Join and Unite." This strategy involves taking control of your opponent's center by melding with it, and causing it to continue turning in the direction it is already turning while you strike in the direction your opponent is traveling. Often, that means you are behind your opponent when you strike.

A Bagua fighter is said to disappear in front of his opponent and reappear behind the opponent. This is accomplished by lateral movement, spinning movement, and controlling your opponent's center so that you move him where you want him.

A lot of these concepts are demonstrated with techniques you can use to develop your skill in my DVD, Basic Building Blocks of Bagua Self-Defense.