How to Use Intent in Your Tai Chi, Hsing-I and Bagua Movements

I am currently updating my instructional videos for the Chen Tai Chi form Laojia Yilu, replacing video shot between 2008 and 2010. As I was shooting instruction on Sunday for the second movement of the form -- Buddha's Warrior Attendant Pounds Mortar -- the concept of "intent" came to mind as something a lot of people misunderstand.

A lot of Tai Chi instructors talk about "intent," but too many students are left with the impression that intent is somehow connected to "cultivating chi" or other mystical, healing energy nonsense.

Let's cut out the noise, eliminate the middleman, and cut to the chase.

"Intent" means exactly what it implies. What is the intent of the movement? What are you intending to do with this movement?

The answer is almost always a self-defense application.

Tai Chi was created as a martial art. Every movement in the form is a self-defense movement. 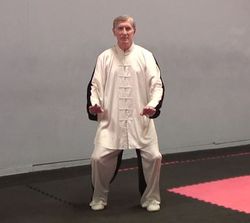 When you perform Tai Chi movements with the intent of self-defense, it informs how your "energy" should be used, how you focus your body mechanics, and where you put your arms and legs. You feel completely different when you move if you are thinking about self-defense rather than becoming One with the universe or trying to be healed by some mystical, cosmic force.

Let me show an example of how the intent of a movement impacts the move. There is one movement that almost always comes second in a Chen Tai Chi form. It is called "Buddha's Warrior Attendant Pounds Mortar." 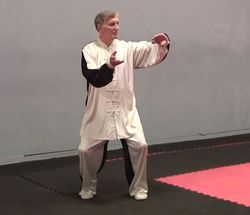 Many beginners go too far to the left, until their arms are pointing sideways.

If you go too far to the left, you violate the "intent" of the movement, which is primarily to grab an incoming punch, get your hands on your opponent's punching arm, and either break it or control it some other way, such as an armbar takedown. 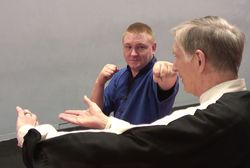 Let me show you. In the third photo, if a punch comes in and I move my hands up to the left side too far, I get a bloody nose. And believe me, my nose is hard to miss.

The last photo shows where my hands need to rise to intercept and grab the incoming arm. I deflect and grab the wrist with my left hand and bring my right hand to his elbow. 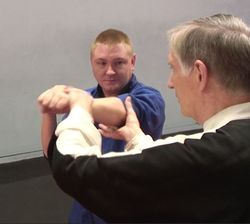 This can be a strike, holding his wrist in place and striking his elbow with the right palm. Elbows break very easily. If the situation does not call for that level of violence, you can do an armbar instead. This is where your hands should be at this point in the movement -- at an angle, not too far to the side. Why? Because it doesn't make sense from a martial perspective to take them too far.

And so, your body, arms, hands, legs, etc. are more likely to be in the proper place if you are able to execute a self-defense application while using your energy in the most efficient internal way.

All of the other principles of Tai Chi are still in play here -- the internal and external harmonies, the body mechanics, the "energies," etc. But the intent of the movement drives it all, and the intent is the application.

If you are not practicing the fighting applications of Tai Chi, there is no way you are going to understand the true intent of the movements. No way. End of story. No matter what your teacher tells you while he is urging you to cultivate chi.

And here is another dirty little secret. As long as you are thinking about cultivating chi and you do not learn the fighting application, you will never have a clear idea on how to properly perform Buddha's Warrior Attendant Pounds Mortar or any other movement in the internal arts.

Here is another little secret. If chi actually does exist (and you know how I feel about that), it will be flowing and cultivating if you do the movement properly and if you are practicing the fighting application in a way that uses proper body mechanics. It is much easier to "feel" the "chi flow" when you perform an application and understand "Oh, THIS is the way I close into the kua and use whole body movement to knock this guy over my knee!" Those lightbulb moments will illuminate the "secrets" of Tai Chi for you a lot faster than pondering abstract, flowery descriptions in the Tai Chi Classics.

On my online videos and my DVDs, fighting applications are as essential as the body mechanics of the movements. In fact, the body mechanics of the movements are often understood much more clearly by showing how they work in a self-defense situation. The entire feeling of a movement changes when you work it in a self-defense scenario. That is why I teach applications as I teach the movement -- in person, on my website, and in most of my DVDs. In fact, if you want a really good understanding of Chen Tai Chi applications, many of them also adaptable to Hsing-I and Bagua, check out my 3-disc DVD series on Tai Chi Fighting Applications.

The concept of "intent" is a simple one. The real art, and the real complexity, comes when you try to apply internal body mechanics properly in both movement and self-defense. 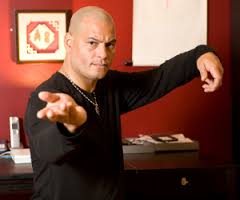 Jose Figueroa is the guest on the 13th edition of the Internal Fighting Arts podcast. Jose teaches Chen Taiji at his Mind Body Synergy Institute in St. Paul, Minnesota. He is a disciple of Ren Guangyi.

Jose is also an author, filmmaker, and has taught Taiji to help traumatized children and adults with PTSD.

This program is a little longer than the typical podcast, at 1 hour 43 minutes. I decided to include it all rather than breaking it into two episodes.

At the beginning of the program, I update everyone on the medical emergency that arose during the past three weeks, and talk about how our personal philosophy or belief system should deliver us from fear.

And as usual, my sidekick Hung Lo offers his usual balanced comments.

Listen to the Internal Fighting Arts podcast or download it to your computer.

It is time for Marvin Smalheiser to either sell Tai Chi Magazine or pull the plug.

In the latest issue, I found one of the worst articles ever written, by William CC Chen. It is bad enough that two or three paragraphs were repeated at least four times, a horrible proof-reading error, but this is the type of bogus "medical" information contained in the article:

"The benefit of the magical art of Tai Chi Chuan for heart diseases is not magic. It is simply a matter of releasing the rib cage muscles and enlarging the inner volume of the torso. The organs are then able to work effectively due to the increased space of the chest cavity."

"The reason for the changes is that releasing of the rib cages without the arms floating up helps to keep the armpits open slightly. It may also help to enlarge the inner volume of the torso."

"The rib cage muscles release to increase the volume of the torso, giving more space to optimize the working conditions of all organs. Maximizing the volume of space in the torso promotes better function, allowing full inflation and deflation of the lungs."

"At the same time, the toes press against the floor and the fingers push against the resistance of air to create an additional forceful energy flow in the body. This creates a dynamic "jet-stream" wave effect within the torso which flushes out any contamination of the organs. It is similar to the water-jet in a dishwasher which rinses off the dirt from the dishes, making them like new and ready for reuse."

I mean, seriously? A dynamic "jet-stream" wave effect that acts as a dishwasher? And what type of research has gone into this discovery? According to William CC Chen, "This information I have accumulated and evaluated from my daily practice with students for the past 60 years."

Well, slap that story into the next issue of the peer-reviewed Journal of General Internal Medicine.

I hate to break this to Grandmaster Chen, but Tai Chi students, including his students, suffer heart disease, cancer, worn-out joints, and other illnesses, and they die at the same ages as the rest of the general population, this despite the extra room our organs apparently have to move around and get "lubricated" and "washed" like dishes.

William CC Chen also quotes Cheng Man-Ching, who allegedly said, "The organs of cats and dogs are healthier than humans because their organs are loosely hanging inside the body as they walk."

This is "medical" information at its worst. But it is not the only example of sloppy standards in this issue.

In another article, the writer uses the story of Zhang San Feng without question as the source of Taiji. I hate to break this to the editor of Tai Chi Magazine, but there is not one shred of evidence that Zhang San Feng ever existed.

There is one article in this issue containing good information, called The Eight Gates of Tai Chi Chuan, by Dax Howard.

One of the reasons I teach, and one of the reasons I started my podcast, Internal Fighting Arts, is to take people beneath the pseudoscience and bogus, unsubstantiated claims made in so much of what we read in magazines and books.

I understand times are probably hard for Tai Chi Magazine, with bookstores closing and circulation probably way down over the past (I am assuming). But the way to make a magazine relevant is to hold writers to a higher standard. The opposite seems to be happening at Tai Chi Magazine, and it is sad, because it could do so much good for the art. One way to do that is to keep it real, not buy into the bullshit and let anyone pass it along.

I won't even go into the Jiang Jian-ye videos plastered across the pages in the back of the magazine. This has been a waste of space for a LONG time.

You have done a great service to the art over the past 40 years, Marvin, but if, after all this time, you can't make it real or maintain quality control, sell the magazine, please. Or pull the plug.

Note from Ken: Marvin Smalheiser passed away in October, 2016. Tai Chi Magazine went out of publication at that point. It is a shame there was no one to carry the magazine forward. It did a lot of good for the art, despite some of the myths and the bad science that it helped perpetuate. Obviously, his age and health had a huge impact on the magazine during the final years.