A Christmas Tree on a Baby's Grave and a Beautiful Day 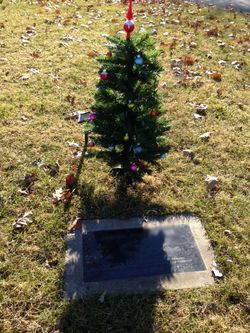 What a beautiful, sunny day it is today! It seems as if the sun has been hibernating behind the clouds for the past two or three weeks, but today, a few days after Christmas, it must have decided to get a little more shining done before the year is over.

It was such a nice day, despite being 28 degrees, Nancy and I took our little dog Minnie for a walk, and we headed down the street to a large, peaceful cemetery with a network of paved roads that serve as a walking path for the neighborhood.

At one point, Nancy noticed a small Christmas tree, about two or three feet tall, that someone had planted in the ground about 15 feet from the path. It was an unusual sight, so I walked across the grass to have a closer look.

The little Christmas tree had been put up next to the grave of a baby who had died just a few years ago.

I read the name on the stone and walked away, but a flood of emotion made me turn and go back, realizing the pain and the love the parents were trying to express during a season when a child should be alive and filled with joy and wonder. How difficult it must have been to place that tree next to their baby boy who would have been eight years old this Christmas.

It is a pain that is all too familiar.

Thirty four years ago, I was surviving my first Christmas after losing a daughter. Shara died of crib death at six weeks old -- suddenly, in the night with no warning. The night before she died, as I was talking to her and trying to get her to smile, she grinned a huge, toothless grin that caused me, her mom and her sister to burst out laughing. It was the first and last time I would see her smile.

The devastation was total. We were stunned and heartbroken through the funeral, as our family and friends tried to offer hopeful words of support.

The day after the funeral, after a series of cloudy, wet days, which I considered appropriate when my little girl had died, I was driving down Georgetown Road near Lexington, deep in despair, when the sun poked out from behind the clouds and the sky became a glorious blue.

What a beautiful day, I thought. And in that moment of enlightenment, the day after burying my baby girl, I knew that I could handle anything that life threw at me. Life is an amazing, horrible, wonderful, exciting, devastating, hilarious and painful journey. The only reasonable thing to do is to live it, experience it, and try to ride the ups and downs while enjoying all that you can. I decided to walk on.

This is perhaps the greatest gift I have received from the study of the internal martial arts and the philosophy upon which they are based. Mindfulness, and the ability to remain centered in times of crisis are two benefits that have changed my life in many ways. Like anyone living in the modern world, I sometimes fall short of my ideals, and I step off the path from time to time, but sometimes I feel as if, through thinking about the lessons of philosophical Taoism and Zen Buddhism and working on skill in these arts have helped build an internal gyroscope that keeps me from staying down very long after the inevitable cloudy days and storms of life do their damage.

And that is the key. We all get knocked down at some point. The question is, how long do we stay down?

A year ago, I visited my cardiologist, and he gave me the results of an echocardiogram. I had been living in heart failure. My "ejection fraction" was around 30 percent. I could drop dead, he said, at any time.

Many of you know, if you have been reading this blog for years, that I nearly died in 2009 after experiencing freak side effects from a procedure for a-fib and I lost the function of my left lung. A couple of doctors, including one at Mayo Clinic, gave me three to five years before my heart gave out. One gave me 10 years.

This was not pleasant news, considering that Nancy and I just met in 2002. I am not in a hurry to leave her just yet, and I would love to see my grandchildren grow up. There is also a lot left to learn in Taiji, Xingyi, and Bagua.

When my cardiologist told me last year that my heart had, in fact weakened during the last few years, I was surprised, but it made sense because I had felt a lot of strange thumpings in my chest during the past couple of years, including thumps that turned into dizzy spells.

After he told me this, I went home and for a few days I constantly wondered if this was my last moment. Walking down the hall in our house, looking at photos of Nancy and our family, I would think, "Is this the last thing I'm going to see?"

Then I realized that if I suddenly keeled over, I would be the last to know. So I stopped worrying about it and continued to practice kung-fu and enjoy life. I decided to walk on.

A few months later, my heart climbed out of heart failure, boosted by a higher dose of medicine. How long it will stay at the "low end of normal" is anyone's guess. It could begin to weaken again soon, or I could be trying to get better at kung-fu for years to come. I try not to worry about it. There is too much to enjoy.

Today, as I saw that tiny Christmas tree next to the baby's grave, my heart filled with pain for the parents who are no doubt in the same place I was all those years ago, trying desperately to survive and pull myself out of an unexpected tragedy. It took years to recover, and it is a pain that never quite vanishes completely. I hope they are doing okay.

I took a photo of the tree and the grave, returned to the path where Nancy and Minnie were waiting for me, and couldn't help but look up and express a little joy at the beautiful blue sky and the bright, sunny day. And then we walked on.